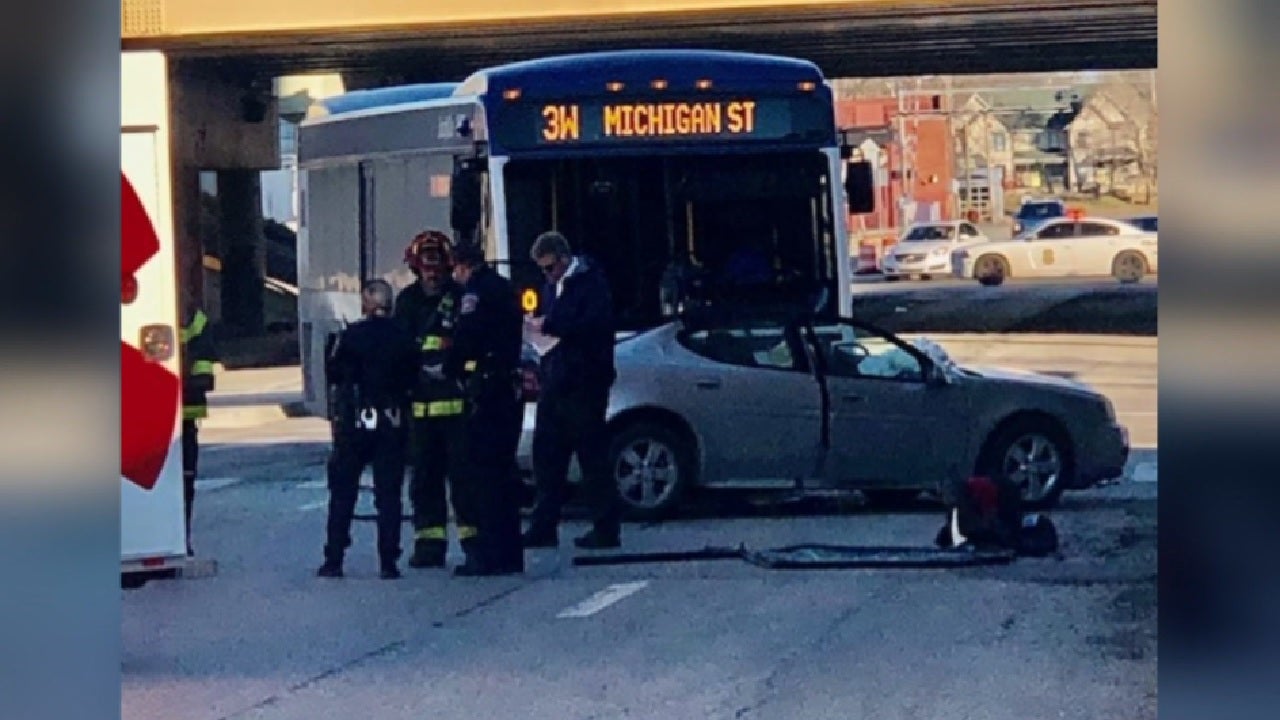 Cindy Evans, 54, the wife of a local ministry director, died from injuries sustained in the accident.

A “young child” in the car she was driving was injured but is expected to recover, authorities said.

The accident was reported Wednesday around 3 p.m. at the intersection of Michigan and Davidson streets in downtown Indianapolis, near an I-65 off-ramp.

The bus was traveling west on Michigan and “t-boned” a car that appeared to be driving south on Davidson, witnesses said.

There are traffic lights at the intersection on both streets. The cause of the crash remained under investigation Thursday night. Alcohol was not believed to be a factor, according to police.

Brooke Santana, an employee at an optometry practice two blocks west of the crash scene, said she avoided the intersection of Michigan and Davidson streets every morning on her way to work by turning off the interstate ramp onto North Street.

“People go way too fast, that’s for sure,” Santana told News 8. “People are distracted, texting, checking Facebook and running red lights [on Michigan]. We see a lot of crazy things out here.”

The owner of the optometry practice, Dr. Samantha Jahnke, said she was working during a previous t-bone crash on Michigan.

It was caused by a driver who disregarded a red light, she said. One car involved in the accident came to rest on the sidewalk, several feet from her practice.

“It was pretty terrifying thinking you might have a car come through your glass windows,” Jahnke told News 8. “We’ve seen lots of accidents [and] lots of almost-accidents.”

In May 2019, the driver of an SUV ran a red light at nearby New York Street and College Avenue, causing a collision with an IndyGo bus. At least six people were transported to a hospital with minor injuries.

In Oct. 2019, the driver of a van fled after running a red light at Central Avenue and 29th Street, causing a collision with an IndyGo bus transporting more than 20 passengers. No injuries were reported.

“They’re all over the place!” Patton said of IndyGo buses.

Mass, velocity and kinetic energy determine stopping distance, according to physicists, explaining why it can take hundreds of feet for heavier vehicles to stop after hitting the brakes.

IndyGo representatives declined to confirm if the bus operator involved in Wednesday’s fatal accident would continue to drive during the pending investigation.