Drivers: Return to your dealers for a 2nd air bag recall fix 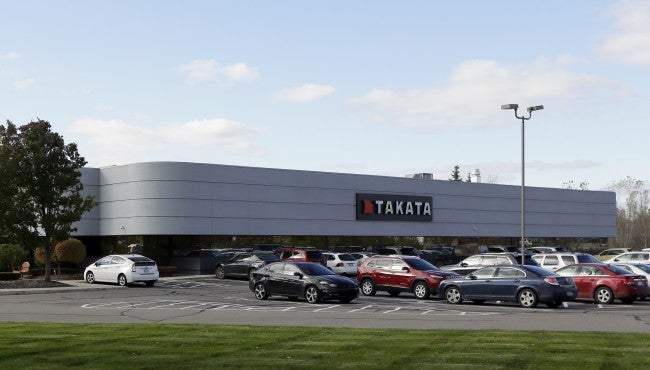 NEW YORK (AP) – The U.S. government says more than 2 million Toyota, Chrysler and Honda vehicles need a second fix for air bags that may inadvertently inflate while the car is running.

The National Highway Traffic Safety Administration says all of the vehicles covered in Saturday’s announcement had already been under a recall for the faulty air bags. Carmakers originally tried to fix the defects by partially replacing the electronic control unit, made by TRW Automotive Holdings Corp. of Livonia, Michigan, but that fix didn’t always work. The new remedy – full replacement of the unit – will be available to all affected vehicles by the end of the year.

However, the NHTSA is urging consumers with cars under the first recall to have the partial unit installed despite the fix’s failure rate, even if they have to return to the dealer under the second recall.

“Even though it’s a temporary solution until the new remedy is available,” NHTSA Administrator Mark Rosekind said, consumers “and their families will be safer if they take the time to learn if their vehicle is covered and follow their manufacturers’ instructions.”

About 39 air bags that had been replaced under the previous recall have deployed inadvertently again.

The agency says about 1 million Toyota and Honda vehicles involved in the new recalls are also subject to a separate recall related to defective air bags made by Takata Corp. of Japan. Those air bags can deploy and rupture with enough force to cause injury or death.

In nine cases, cars had problems that included both the inadvertent deployment and the Takata rupture. Three of those cases resulted in injuries, including eye injuries, scratches and burns.

No death or injuries related to non-Takata air bag failures have been reported.

The announcement comes days after the family of Carlos Solis filed a lawsuit against Takata. Solis, 35, died on Jan. 18 in a minor crash in a Houston suburb. The lawsuit alleges that as an air bag in his 2002 Honda Accord inflated, it sent a piece of metal into his neck. Solis died at the scene. His death has not officially been linked to the air bag.

Takata is under fire for air bag inflators that can explode, shooting out metal and plastic pieces. At least five deaths and dozens of injuries have been linked to the problem worldwide. Ten automakers have recalled about 12 million vehicles in the U.S. and about 19 million globally for problems with the air bags. The company is still trying to determine the cause of the problem.