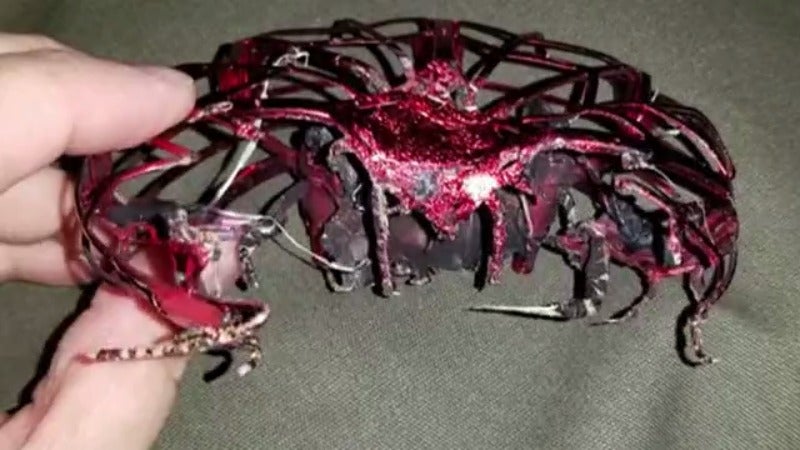 EDWARDSVILLE, Ill. (WISH) — A woman says a popular drone toy she bought for her kids for Christmas nearly set her house on fire.

The night before Christmas, Celeste Robinson and her husband plugged in the As Seen on TV Web Store’s UFO Drone For Kids Hand Controlled they’d ordered weeks ago so the kids could use them first thing in the morning.

“We went ahead and put them on the charger, went to lay down and go to sleep and realized I forgot another gift that I forgot to wrap.”

That’s when her husband heard a strange hissing noise.

They walked to the counter to find the drones hot to the touch.

“We unplugged them and all of a sudden it just started sparking like a firework, just shooting up.”

Panicked, Robinson threw the drone on the floor after it burst into flames in her hand. Photos show her burnt carpet and pieces of metals still stuck to the floor. No one was hurt.

“If that spark would have gone, it probably would’ve got the cabinet above it and everything else in flame.”

According to the instructions, the drone takes 40 minutes to become fully charged. Robinson says the drones were only plugged in for a half hour.

“Looks like just a half-melted circle right now. I mean, the whole battery pack a shot off.”

Robinson said the kids “were kind of bummed in the morning whenever we were telling him about it.”