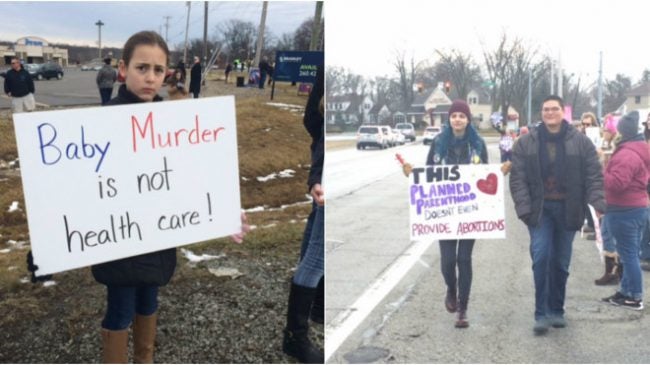 FORT WAYNE, Ind. (WANE) – More than 100 people attended a rally calling for defunding of Planned Parenthood Saturday at the Fort Wayne location of the health center. Meanwhile, a counter-protest took place across the street with about the same number of people.

Protesters at the defund rally, one of more than 200 coordinated nationwide by the #ProtestPP Coalition, called for Planned Parenthood to be stripped of all federal funding and for all such funding to be redirected to federal health centers that do not perform abortions, according to a press release from Advocates for Justice, the Fort Wayne organization behind the rally.

Congressional leaders have recently pursued legislation to cut funding for the controversial organization. Planned Parenthood received more than $500 million in 2014-2015, according to the organization’s annual report.

“The effort to defund Planned Parenthood has nothing to with taking healthcare away from women,” Lisbeth Nelson, Director of Advocates for Justice said in a press release. “It’s about taking tax dollars away from the nation’s largest abortion chain,” she explained.

The defund protesters gathered at the health center located at 3914 W. Jefferson Blvd. throughout the morning. The Fort Wayne location of Planned Parenthood does not provide abortions at the facility, but they do provide referrals, according to their website.

The counter rally was planned in response once supporters of Planned Parenthood heard about the defund rally.

For more information about the nationwide rallies visit, ProtestPP.com.