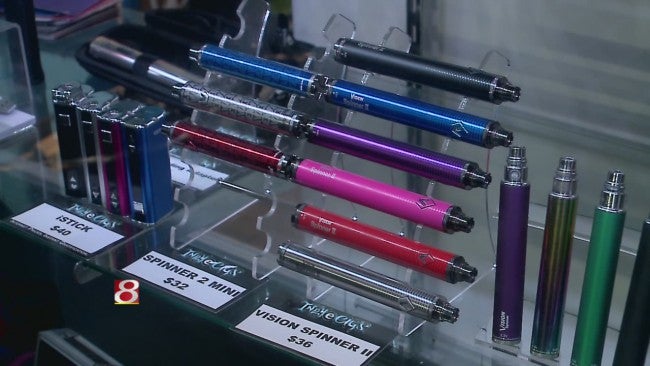 Attorney General Greg Zoeller along with state legislators put together a proposed legislation to crackdown on the sale and usage of the product.

It includes taxation as well as licensing for the stores that sell them.

24-Hour News 8 spoke to a vapor shop owner who agrees with regulation, but only if it’s fair to the industry.

Looking at the wall inside Indy E Cigs in Broad Ripple, it appears the menu on display would attract a person’s sweet tooth.

Flavors include Cola Gummy, Vanilla Custard, and Sugar Bear. But there’s nothing to eat or drink here, just inhale

Workers regularly check a customer’s driver’s license to make sure they’re not minors, but Attorney General Zoeller feels that’s not enough. He said studies show that e-cigarettes are now more popular among minors than regular cigarettes, and he feels the tasty names are one of the reasons.

“Can we cut the crap with the marketing to children thing,” asked customer Cloris Anderson-Money. “I’m an adult and I like strawberry flavoring.”

Shadi Khoury owns Indy E-cigs and agrees with Zoeller’s stance that too many children are getting hooked on vapor products.

That’s how he wants to market the popular product – as a means to move away from regular cigarettes.

But Zoeller wants to tax it just like other tobacco products at a rate of 24 percent – a number that doesn’t sit well with Khoury.

He’s not against a tax, nor the idea of making sure e-liquid containers come with child proof caps.

“I definitely agree with child proofing the liquids,” added another customer.

The final regulation Zoeller called for was including e-cigarettes with the statewide smoking ban. The proposed legislation will go before the general assembly at the next session. Khoury says he’s been in contact with Zoeller throughout this process and will continue to do so as it moves forward.