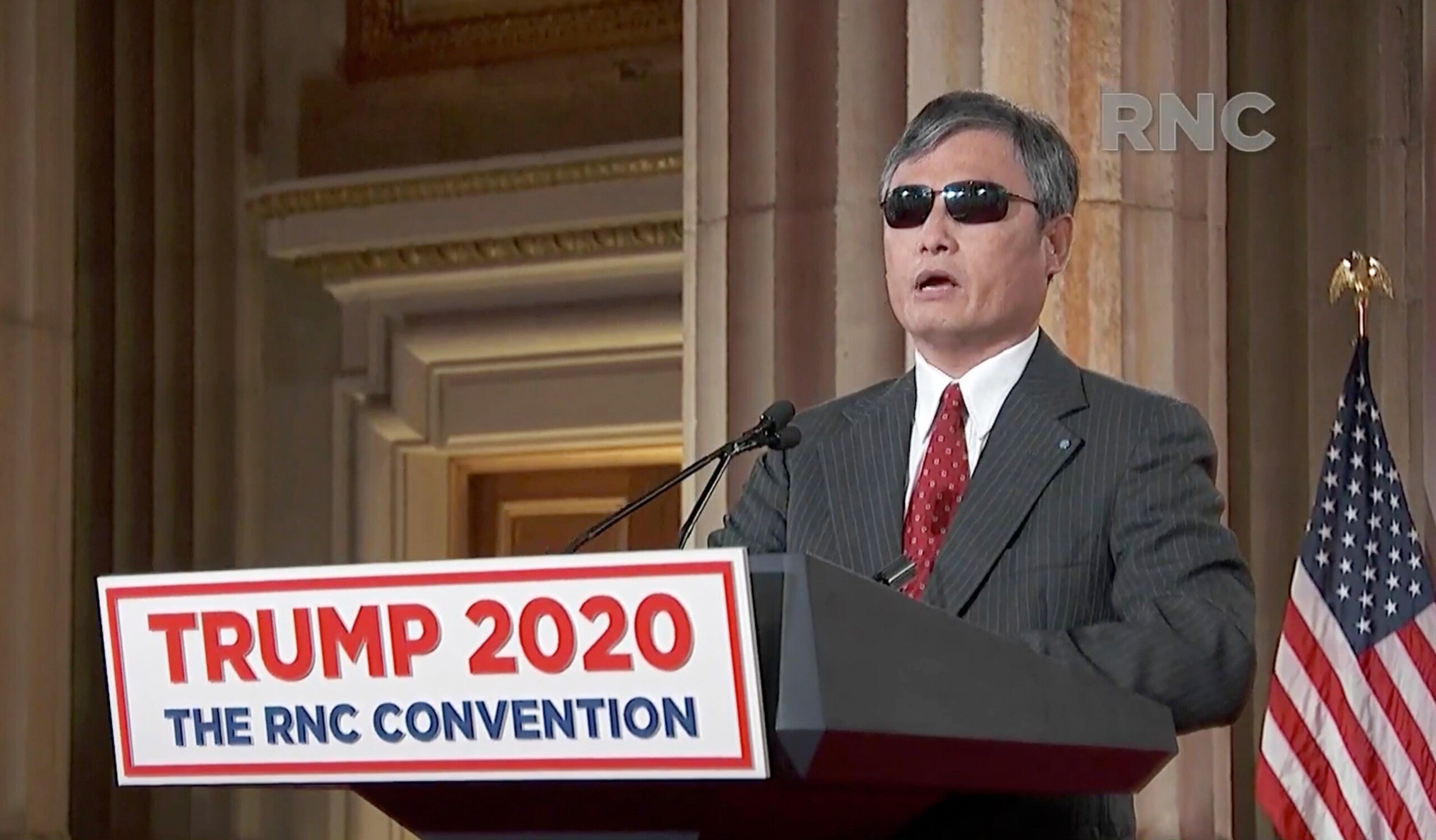 CHARLOTTE, NC - AUGUST 26: (EDITORIAL USE ONLY) In this screenshot from the RNC’s livestream of the 2020 Republican National Convention, Chinese human rights activist Chen Guangcheng addresses the virtual convention on August 26, 2020. The convention is being held virtually due to the coronavirus pandemic but will include speeches from various locations including Charlotte, North Carolina and Washington, DC. (Photo Courtesy of the Committee on Arrangements for the 2020 Republican National Committee via Getty Images via CNN)
by: James Griffiths, CNN
Posted: Aug 27, 2020 / 08:08 AM EST / Updated: Aug 27, 2020 / 08:08 AM EST

(CNN) — A Chinese human rights activist brought to the United States by the Obama administration appeared at the Republican National Convention Wednesday, where he praised President Donald Trump.

Chen Guangcheng, known for his work fighting against forced abortions under China’s one child policy, faced years of harassment by the authorities before he fled to the US Embassy in Beijing in April 2012, ahead of a visit by then Secretary of State Hillary Clinton. Following a month of tense negotiations, Chen was eventually permitted to leave China and fly to the US, where he has lived ever since.

While he expressed gratitude at the time, Chen has emerged as a frequent and fierce critic of the Obama administration and Democratic politics in general — with critics accusing him of espousing ring-wing views and conspiracy theories. Ahead of his speech at the RNC, he tweeted a video of a pro-Trump demonstrator defacing a Black Lives Matter display in New York, with the caption “freedom.”

In prepared remarks sent out prior to the speech, Chen attacked “the policy of appeasement of former administrations — including Obama and Biden,” which he said had “allowed the CCP to infiltrate and corrode different aspects of the global community.” However, in the live speech to the RNC, he did not mention Obama.

Speaking by video to the conference, Chen praised Trump for leading the fight “to stop China’s aggression,” and called on Americans “to support, vote, and fight for President Trump for the sake of the world.”

Relations with Beijing have plummeted under Trump, who has made being tough on China a key plank of his reelection campaign.

In a speech Tuesday, Trump’s secretary of state, Mike Pompeo, also inveighed against Beijing and praised Trump for pulling “back the curtain on the predatory aggression of the Chinese Communist Party.”

According to the Pew Research Center, Americans in both parties “now see China much more negatively than in the recent past,” with 83% of Republicans surveyed saying they have a unfavorable view of the country. According to Pew, while Republicans have long been suspicious of Beijing, Democrats in recent years have also become more suspicious — 68% of supporters surveyed said they viewed China unfavorably — so there is growing consensus on the issue.

Many Chinese dissidents living in the US are vocal supporters of Trump’s hard line on China. Chen is closely linked to Bob Fu, a conservative Christian pastor who has described himself as “God’s double agent.” Fu has met with Pompeo and Vice President Mike Pence and praised Trump on social media.

Fu assisted in Chen’s departure from China and later was involved in him getting positions at the Witherspoon Institute, a conservative think tank based in New Jersey, as well as Catholic University in Washington.

Not all Chinese dissidents feel the same, however. Teng Biao, a human rights lawyer who once represented Chen, tweeted Wednesday that “for Chinese human rights defenders, there is zero logical consistency to supporting Trump.”

“I am a good friend and (former) lawyer of Chen Guangcheng’s, but I completely oppose what he is doing,” he said. “I will never ever support a person who told a dictator to ‘keep building’ the #ConcentrationCamps in #Xinjiang and who labeled #Tiananmen democracy movements and #Hongkong protests as ‘riots’,” said Teng, referencing comments allegedly made by Trump.

In his remarks at the RNC, Chen said that “standing up to tyranny is not easy. I know.”

“When I spoke out against China’s ‘one child’ policy and other injustices, I was persecuted, beaten, and put under house arrest by the government,” he said. “In April, 2012, I escaped and was given shelter in the American embassy in Beijing. I am forever grateful to the American people for welcoming me and my family to the United States where we are now free.”

Blind since childhood, Chen taught himself the law and became involved in human rights activism, particularly around issues of forced abortions and other abuses relating to the “one child policy.” He was first imprisoned for four years in 2006, after which he was kept under tight house arrest for years until his dramatic 2012 escape.

During that period, a CNN crew accompanied actor Christian Bale, then in China promoting a movie, to visit Chen. Bale was attacked by a security guard and the team was prevented from getting to the house where Chen was held.

During his speech Wednesday, Chen called the Chinese Communist Party (CCP) “an enemy of humanity” that “is threatening the well-being of the world,” listing a variety of issues including China’s oppression of Uyghur Muslims in Xinjiang, an ongoing crackdown in Hong Kong, and threats towards Taiwan.

Echoing Trump, Chen added that “the coronavirus pandemic, originating in China — and covered up by the CCP — has caused mass death and social upheaval around the world.”