From Tiffany to Target, stores are boarding up windows in case of election unrest 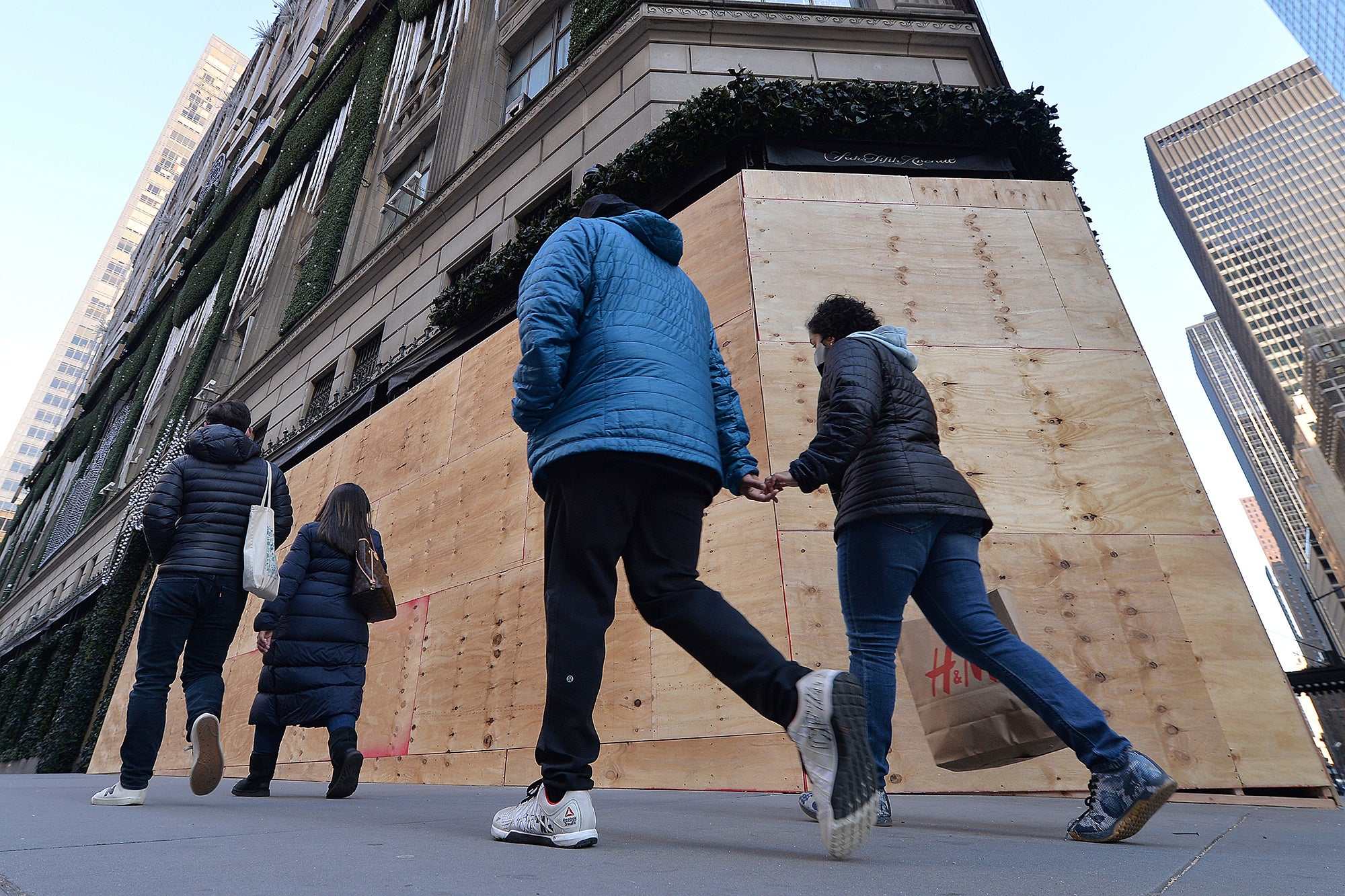 Pedestrians walks past the boarded up windows of Saks Fifth Avenue department store in New York, in New York, NY October 31, 2020. Oct. 31, 2020. With a contentious Presidential Election a few days away, some stores are preparing for a what could be another round of vandalism such what they experienced over this past summer. (Anthony Behar/Sipa USA)(Sipa via AP Images)
by: Nathaniel Meyersohn, Alexis Benveniste and Chauncey Alcorn, CNN Business
Posted: Nov 2, 2020 / 04:27 PM EST / Updated: Nov 2, 2020 / 04:27 PM EST

(CNN) — Retailers across the country are stepping up security measures to try to head off any damages to their stores during election-related protests in the coming days.

Tiffany, Saks Fifth Avenue, CVS, Target and Macy’s are among the chains that are boarding up some of their stores’ windows in preparation.

“While we intend to remain open where possible, out of an abundance of caution the windows of select stores in key cities will be boarded in anticipation of potential election related activity,” said Nathan Strauss, spokesperson for Tiffany.

Stores around the country were damaged this summer, and merchandise was stolen during protests over the death of George Floyd in Minneapolis. Retailers are hoping to prevent this from happening again.

CVS said it is boarding up stores in areas where they have been damaged by unrest in the past. Stores where windows are covered “will continue to be open to serve customers as long as it is safe to do so,” said CVS spokesperson Mike DeAngelis.

Tom Buiocchi, CEO of ServiceChannel, an online platform that connects retailers with local contractors, said 750 stores have requested orders on the platform to board up their windows around the country since Oct. 27, with the most in California, New York and Illinois. The cost to board up stores has ranged from $124 to $31,000, depending on the size, according to Buiocchi.

For retailers, election-related vandalism would be the latest disruption to their businesses during the pandemic. While large chains may be able to easily handle the added costs of boarding up, small retailers may face a tougher time.

Retailers are sharing their safety precautions with each another and consulting with police officials to assess potential threats to their property, said Lisa LaBruno, senior executive vice president at the Retail Industry Leaders Association, a trade group.

Companies decide which of their stores to board up based on factors such as whether a store have been damaged in the past and whether protests are planned in the area around a store, she said.

They also take into account what other retailers in a store’s area are doing. “No retailer in, say, a single exterior mall wants to be the only retailer that’s not boarded because then they have a target on their back,” she said. Retailers also do not want to be the only store boarded up in a mall or on a street because it “might give the impression that you’re misinterpreting what the current situation in that environment really is.”

FMI, a trade association for leading grocers, has provided guidance that encourages grocers to consider adjusting their delivery schedules to avoid nighttime deliveries, if necessary, and remove trash cans and excess carts from their parking lots.

Some businesses in popular commercial districts such as Times Square in New York, the Magnificent Mile in Chicago and Rodeo Drive in Los Angeles are taking extra precautions.

Rodeo Drive, for example, will shut down to traffic beginning at 11:59 PM Monday until Wednesday evening. And the Magnificent Mile Association, a group representing businesses in the district, has set up “an auxiliary command center” on Election Day and will communicate “real-time information to our business community,” Kimberly Bares, president of the group, said in an emailed statement.