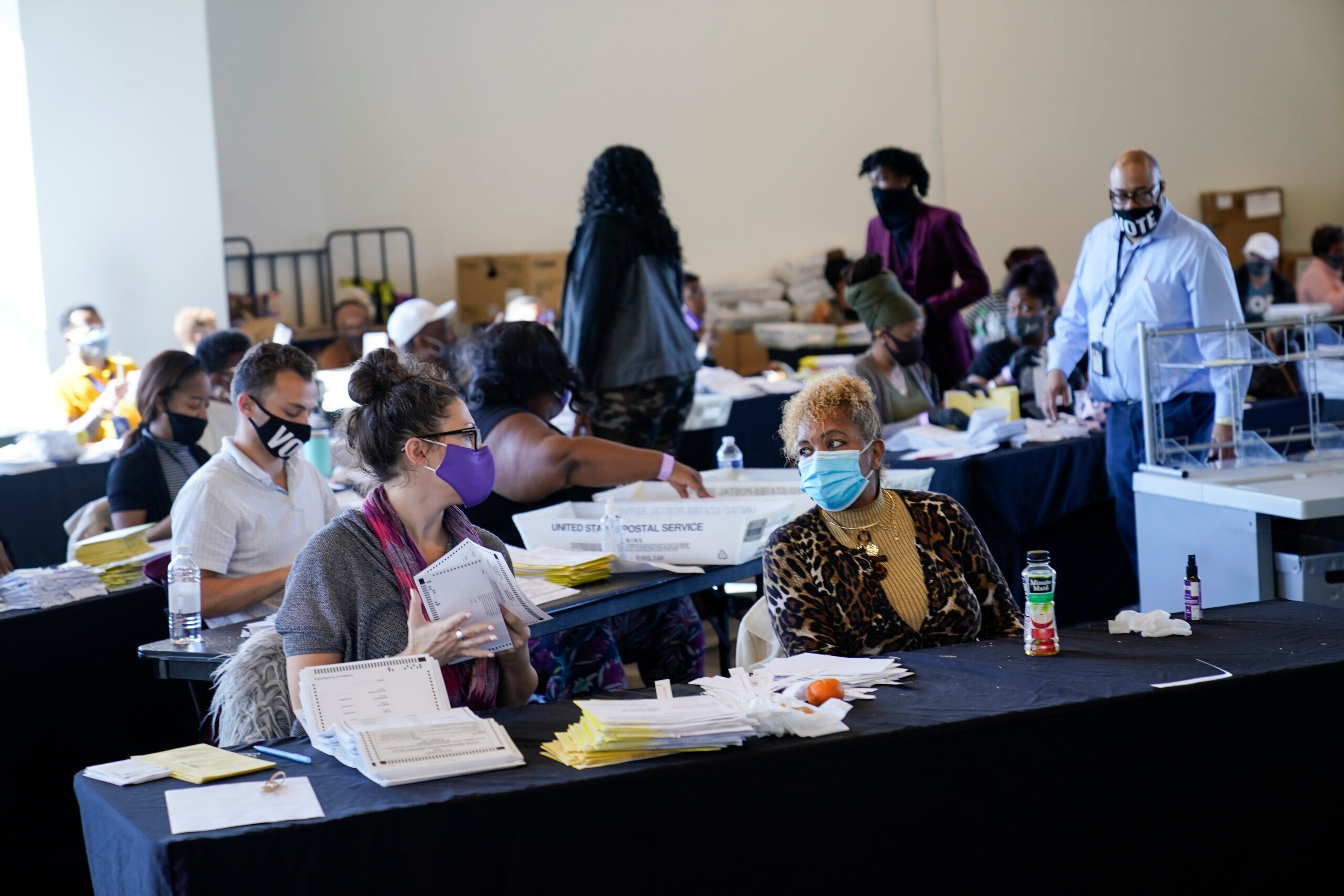 ATLANTA (AP) — With all eyes on Georgia’s razor-thin presidential vote margin, falsehoods are swirling on social media about supposed ballot counting irregularities there.

Among the most widely shared examples is a video that has racked up millions of views on Twitter. It claims to show a poll worker crumpling up an absentee ballot.

As it turns out, it shows no such thing. Richard Barron, the Fulton County elections director, said late Friday that the poll worker seen in the video was discarding paper instructions, not a ballot, which would have been much larger than the paper seen in the video.

Barron also said the worker was in hiding after being harassed online due to the false claims.

Here’s a look at the facts:

CLAIM: A video showing the ballot count in Fulton County, Georgia, shows fraud because a poll worker processing absentee ballots crumples one up.

THE FACTS: Election officials say the poll worker in the video did not crumple or discard a ballot.

“It’s been questioned whether the poll worker featured in the video was discarding one of those ballots. The answer is no, undeniably no,” Barron told reporters at a Friday evening news conference at the Fulton County elections warehouse in Atlanta. “At no time was the poll worker able to extract a ballot.”

The widely shared video shows Fulton County poll workers processing absentee ballots at Atlanta’s State Farm Arena on Nov. 3. The poll worker appears to gesture in an animated way, and then crumple up a small piece of paper.

It appears that someone took a video of a video that someone else had recorded in the arena and added narration from a male voice. It is not clear who shot the original footage that the tweeted video was based on.

“He has a fit about something. And then flips off a ballot, and then crumples it up,” the narrator says. “If that is not voter fraud I don’t know what is.”

David Shafer, the chairman of Georgia’s Republican Party, retweeted the video and wrote, “Lawyers for the Georgia Republican Party have demanded that the Fulton County Board of Elections investigate and explain what is happening in this video.”

Barron said his review of the incident determined there was no way the poll worker in the video could have discarded a ballot.

The poll worker’s assignment was to use a cutting machine to open the outer envelopes and separate them from interior envelopes. “At no time was the worker able to extract the ballot,” reads a statement from Fulton County. “Ballot extraction only occurs with workers assigned to sorting duties.”

The statement explains that the piece of paper seen in the video is too small to be a ballot, which would have measured 8.5 by 19 inches.

Instead, Barron said it appeared the worker was discarding the list of instructions voters receive in their mailed ballots, which are 8 by 5 inches. “Due to the difference in sizes, it is clear that no ballot was damaged or discarded,” the statement reads.

On the question of why the worker appeared agitated in the video, the statement says he had explained his fingers were slightly injured due to a machine malfunction.

Barron told reporters that the worker was staying with friends because he no longer felt safe at home after social media users harassed him and released his personal information.

“He was one of the workers that we had who trained everyone how to use those cutting machines because he was very good at it, and he was the fastest one,” Barron told reporters.

“I expressed my sorrow that all of this has happened to him for wanting to be an election worker and doing nothing but a good job during that.”

This is part of The Associated Press’ ongoing effort to fact-check misinformation that is shared widely online, including work with Facebook to identify and reduce the circulation of false stories on the platform.