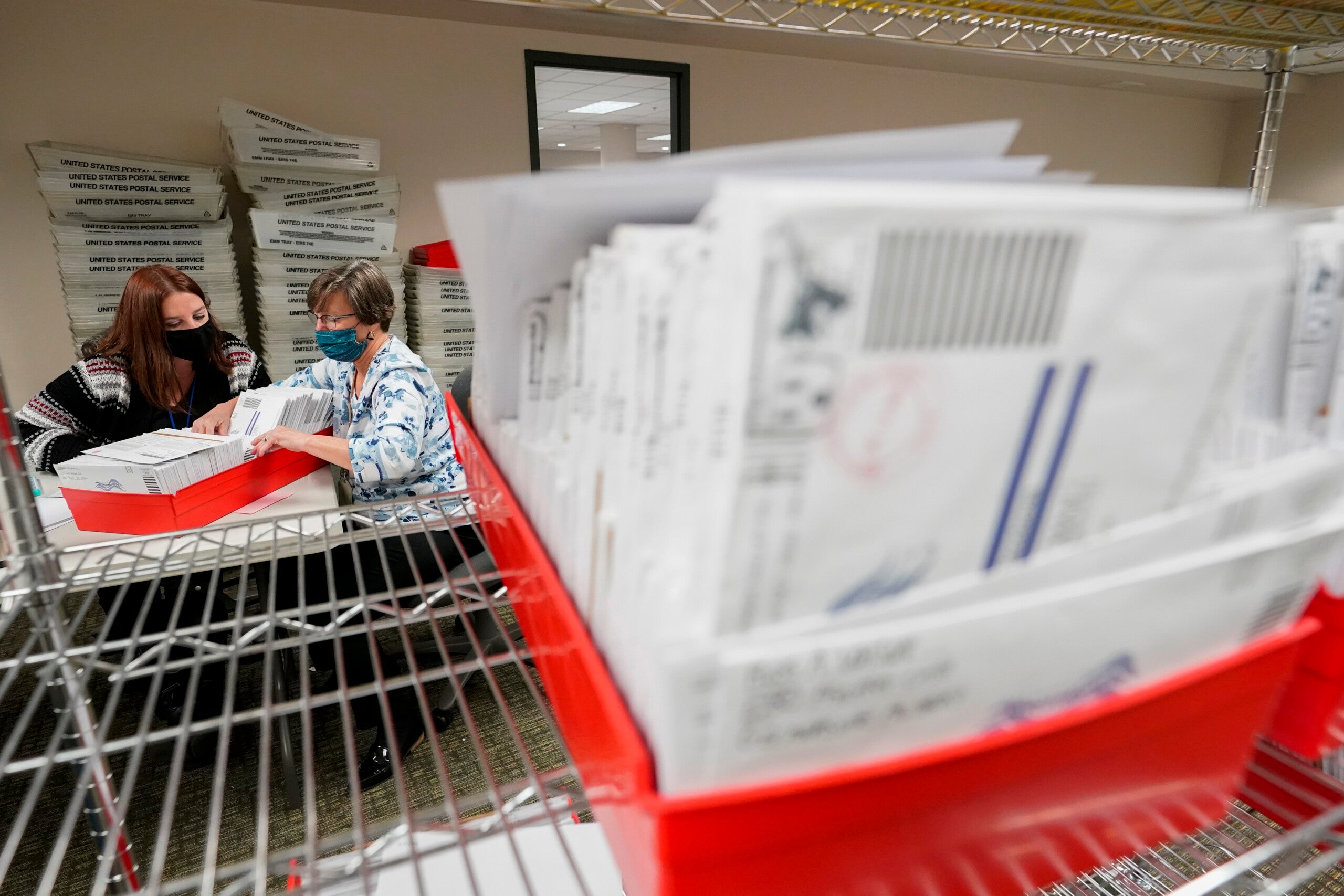 (CNN) — State judges in Arizona and Pennsylvania and a federal judge in Georgia rejected election-related lawsuits Thursday from Republicans and the Trump campaign.

The hat trick of losses were the latest round of defeats for the Trump campaign in its long-shot and increasingly far-fetched bid to block President-elect Joe Biden’s win before the Electoral College certifies him as the next president.

One of the judges, a Trump appointee in Georgia, called the attempt by Republican-allied lawyers to block election results “quite striking,” refusing their attempt to stop Biden’s win there.

In Arizona, a state judge declined to audit votes in the state and delay the finalization of results, saying the lawsuit couldn’t be retooled and brought again. And in Pennsylvania, a state judge ordered the counting of more than absentee 2,000 ballots the Trump campaign wanted to exclude.

The rulings came with only a few hours between them on Thursday.

Losses for the Trump campaign have piled up on other recent days, including when nine cases from the Trump campaign or his allies were either denied or pulled last Friday, and when Trump-supporting voters dropped four lawsuits pushing fraud claims earlier this week.

Despite pledges by Trump campaign attorneys — including Rudy Giuliani — to continue the fight, nearly no viable post-election cases remain for the Trump campaign that could deprive Biden of the electoral votes to become president. Legal analysts have widely said Trump’s bids in court to change the election results will all fail.

One federal lawsuit now spearheaded by Giuliani lingers in Pennsylvania, but the judge who is considering it expressed skepticism on Tuesday that the commonwealth’s presidential vote should be discarded.

An Arizona state judge threw out the Arizona Republican Party’s lawsuit seeking a broader audit of votes cast on Election Day that county lawyers warned could have delayed the state’s certification of ballots.

In a brief order, Judge John Hannah dismissed the lawsuit with prejudice and denied the party’s request for an injunction to block Maricopa County, home of Phoenix and the most populous county in the state, from certifying its election results.

CNN projects that President-elect Joe Biden will win Arizona, leading by more than 10,000 votes with an estimated 99% of precincts reporting as of Thursday night and marking the second time a Democrat will carry Arizona in a presidential election in more than seven decades.

The Arizona GOP alleged that the Secretary of State’s manual violated state law because its hand count of a random sampling of ballots was conducted based on polling places, not precincts.

The order marks yet another lawsuit to be thrown out by the courts as Republicans look to challenge the election’s results in battleground based on unsubstantiated claims of widespread voter fraud and election malfeasance. Last week, lawyers for the Trump campaign dropped a lawsuit seeking a review of all ballots cast on Election Day after finding that the margin of victory for the presidential contest in Arizona could not be overcome.

More than half of all counties in Arizona have conducted post-election audits and found either no discrepancies or microscopic issues that don’t affect the outcome, according to reports filed with the secretary of state’s office.

Audits in Arizona’s four largest counties, which comprised 86% of all votes for president in the state, turned up no evidence of the systematic voter fraud that President Donald Trump has complained about. There were no irregularities found in Maricopa County. Officials in Pima County, home to Tucson, audited a random sample of 4,239 votes in the presidential race and only found a two-vote discrepancy.

“Arizona’s election was well-run and transparent, and far-right fringes of the Arizona Republican Party should stop trying to undermine Arizonans’ faith in free and fair elections,” Burgan added.

Arizona Republican Party Chairwoman Kelli Ward slammed the order on Thursday and renewed her call for an audit. “I stand by my call for a full hand-count audit of our state’s election results,” Ward said in a statement, though she did not explicitly confirm that the party would appeal.

An attorney for the county, Joseph LaRue, said in court that county’s deadline for certifying ballots is Monday and a delay, could impact the state’s ability to meet the Electoral College deadline. The state certification deadline is November 30. The Electoral College votes on December 14.

A state judge in Pennsylvania rejected an attempt by the Trump campaign to throw out more than 2,000 absentee ballots for technical reasons.

The Trump campaign has made several attempts to throw out absentee ballots in Pennsylvania courts, and Judge Robert Baldi of the Bucks County Court of Common Pleas on Thursday ruled that throwing out the absentee ballots would disenfranchise voters.

The case was not among those where the Trump campaign has alleged fraud. Instead, the campaign had argued the state should enforce rules about when absentee ballots should or should not be counted, taking issue with 2,177 ballots in Bucks County that were in an unsealed privacy envelope or lacked handwritten dates, names or addresses on their outer envelopes.

Those ballots will be counted, Baldi ordered.

Baldi, in his opinion on Thursday, made clear fraud was not an issue.

“It must be noted that the parties specifically stipulated in their comprehensive stipulation of facts that there exists no evidence of any fraud, misconduct, or any impropriety with respect to the challenged ballots. There is nothing in the record and nothing alleged that would lead to the conclusion that any of the challenged ballots were submitted by someone not qualified or entitled to vote in this election,” he wrote. “At no time did Petitioners present evidence or argument to the contrary.”

In an outcome more favorable for Republicans, the Pennsylvania Commonwealth Court decided 2-1 on Thursday that 2,349 absentee ballots in Allegheny County should not be counted, siding with a Republican state Senate candidate who brought the case to contest validity of ballots with a technical flaw. The ballots did not have a date of the voter’s signature on the outside envelope.

The ruling differs from other courts in the state that have refused Trump campaign requests to throw out hundreds of ballots because they had technical deficiencies, like lacking other handwritten information on absentee ballots’ exterior envelopes. None of the cases contest enough ballots to change Biden’s win in the state.

A federal judge in Georgia rejected an election lawsuit brought by a Republican elector, Lin Wood, who had alleged in court constitutional violations, perceived fraud in the presidential election and sought to block the certification of election results.

“There’s no doubt an individual’s right to vote is sacrosanct,” Judge Steven Grimberg in the Northern District of Georgia said Thursday evening. But, that “does not mean individual voters have the right to dictate” how votes are cast or decided to be counted.

“It’s not for the courts to meddle with” processes set by the states, he added.

Wood’s attorney indicated earlier on Thursday that he may want to try for a second round before the judge, representing the Trump campaign as it seeks to block a Biden win. But Grimberg’s ruling on Thursday, spoken from the bench, shuts down new rounds of lawsuits in multiple ways.

Grimberg decided that the elector in Georgia didn’t have the ability to show he could bring a case, didn’t have an avenue in court under the law and had sued far too late to affect the election.

“I didn’t hear any justification for why the plaintiff delayed bringing this claim until two weeks after this election and on the cusp of these election results being certified,” Grimberg, a Trump appointee, said. Absentee ballot counting in Georgia, which Republicans were challenging in the lawsuit, started months ago, he noted.