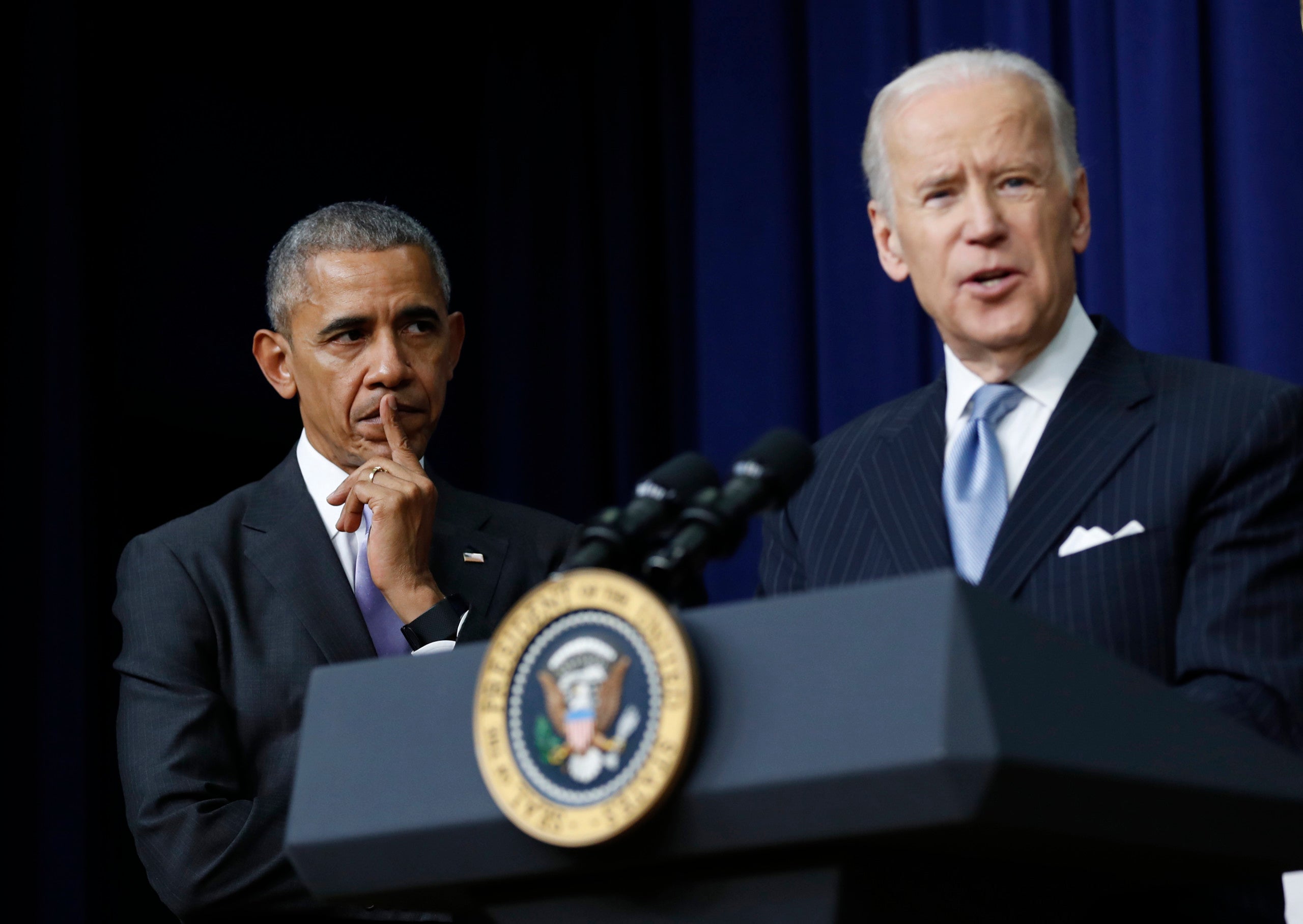 FILE - In this Dec. 13, 2016, file photo, President Barack Obama listens as Vice President Joe Biden speaks in the South Court Auditorium in the Eisenhower Executive Office Building on the White House complex in Washington. Biden is getting some help from Obama as he looks to fill his campaign coffers and unify the Democratic party ahead of the November election. Obama and Biden will appear together Tuesday, June 23, for a “virtual grassroots fundraiser,” the former vice president announced on Twitter. (AP Photo/Carolyn Kaster, File)
by: ALEXANDRA JAFFE, Associated Press
Posted: Jun 23, 2020 / 07:01 PM EST / Updated: Jun 23, 2020 / 07:01 PM EST

WASHINGTON (AP) — Former President Barack Obama warned Democrats against being “complacent or smug” about the presidential race at a grassroots fundraiser for presumptive Democratic nominee Joe Biden Tuesday, calling on viewers to learn the lessons from 2016 and not take the election for granted.

“There’s a backlash, that is fierce, against change,” Obama added.

The former president referenced the division among Americans which he said President Trump “exploits,” and new challenges to voting rights in recent years.

“We can’t be complacent or smug or suggest that somehow it’s so obvious that this president hasn’t done a good job, because look, he won once, and it’s not like we didn’t have a good clue as to how he was going to operate the last time,” Obama said.

He implored the audience to get engaged with Biden’s presidential campaign, declaring that “whatever you’ve done so far is not enough.”

The fundraiser marked Obama’s official return to the presidential campaign trail, and underscored his unmatched popularity within the Democratic Party. Biden, who appeared virtually alongside Obama at the event, said it raised a record-breaking $7.6 million from more than 175,000 individual donors.

It was a kickoff of what Obama’s team says will likely be a busy schedule heading into the fall, as he looks to help elect not just Biden but Democrats running for House and Senate. And his comments suggest Democrats are taking very seriously the possibility that their base could grow too comfortable this fall, with a number of state and nationwide surveys showing Biden with significant, often double-digit leads over Trump.

Obama sometimes struggled to lift other Democratic candidates while he was in the White House, notably losing control of the House in 2010 and the Senate in 2014. But in the era of President Donald Trump, Democrats believe Obama’s appeal, especially among Black and younger voters, can help boost energy for Biden.

“There’s two groups of voters that Biden needs to move,” said Dan Pfeiffer, former White House communications director. “You have the 4 million Obama 2012 voters that sat out in ’16, Obama obviously has cache with them. And you have to persuade some number of voters who voted for Barack Obama in 2012 and either Trump or a third party candidate in 2016, and Obama obviously is very, very high-performing with those as well.”

Indeed, during Tuesday night’s fundraiser, Obama made a frequent pitch directly to young voters, telling them he was “hopeful” about the new energy for reform he’s seen within the younger generation but warning them not to get discouraged with a political process he said “is always going to be slower” and “less satisfactory” than engaging with a social movement through public demonstrations.

Obama endorsed Biden with a video message in April, but kept an otherwise low profile throughout the primary and largely avoided wading into national politics. In recent weeks, however, he’s reemerged publicly to speak out on policing and the civil unrest that followed the police killing of George Floyd in Minneapolis.

Some Democrats say that, in the wake of Floyd’s killing, Obama’s voice as an advocate for Biden and a leader for the party is needed.

“Biden doesn’t have the strongest record on criminal justice reform so having Obama there is helpful in reinforcing that issue,” said Ben Tulchin, who polled for progressive Vermont Sen. Bernie Sanders’ presidential campaign.

“Given what’s going on with criminal justice reform and Black Lives Matter, having the first African American president out there publicly backing Biden is extremely helpful.”

But Obama’s reemergence is not without risks for Biden.

For Trump’s campaign, it offers an opportunity to resurface some of their favorite political attacks — charges that the Obama administration’s policies undermined the American middle class and U.S. interests abroad.

They believe the focus on Obama will help reinvigorate Trump’s base, and remind waffling Trump voters — those considering voting for Biden, or staying home — of their dissatisfaction with the prior administration. And they see a potential opportunity to drive a wedge between Biden and his base by resurfacing issues from the Obama administration — like the high rate of deportations — that riled progressives during the Democratic primary.

Trump campaign deputy communications director Ali Pardo said that together, Obama and Biden “put ‘kids in cages’ and failed to stop China from ripping off Americans while overseeing the worst economic recovery since the Great Depression and stagnant wage growth for American workers.”

Trump himself has pushed unfounded conspiracy theories about Obama, hoping to taint Biden by association.

Still, Democrats say Obama is eager to take Trump on to defend his legacy in a debate over whose policies have better benefited Americans.

Biden’s embrace of Obama during the Democratic primary created some headaches for the former vice president within his own party as well.

Biden was criticized by some opponents as too focused on returning to the status quo of the Obama years at a time when the progressive base of the party was clamoring for significant structural change.

But by the end of the primary contest, at least five candidates — including Sanders — aired ads featuring praise from the former president or photos of the candidate alongside him. And both Biden and Sanders have made overtures toward progressives, with Biden embracing some of Sanders’ policies and Obama praising him by name in his endorsement video for Biden.

But Stephanie Cutter, who served as Obama’s 2012 campaign manager, said that if Obama’s reemergence into the campaign raises any further debates about the policies of his administration, he’ll be prepared to respond.

“There’s nobody better to answer those questions than Obama,” she said.