Obama to deliver DNC address from Philadelphia to underscore US democracy 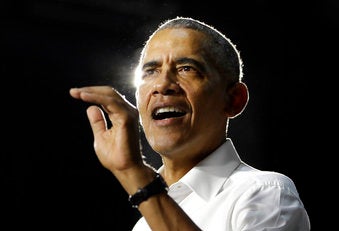 (CNN) — Former President Barack Obama will deliver his speech to the nation Wednesday night from the Museum of the American Revolution in Philadelphia, a senior Democratic official tells CNN, with a location intended to underscore “our very democracy is at stake” in this election.

“He will make a pointed case that Democracy is on the line,” the senior Democratic official said, describing Obama’s speech to the Democratic National Convention as a “call to all Americans.”

The former president’s speech comes on the third night of the party’s gathering, which is being held virtually amid the coronavirus pandemic, with speakers addressing the convention from key locations across the country.

Obama plans to make an aspirational case for his former vice president, Joe Biden, and Sen. Kamala Harris, aides say, in a speech that will outline their “experience and character to lead us out of the ongoing economic and health care disasters that the current administration has blundered into.”

He also teased his speech in a fundraising appeal on Wednesday, calling for the country to return to a time of normalcy after four tumultuous years.

For Obama, it’s his fifth speech at a Democratic National Convention. His first appearance was in 2004, when he delivered the keynote address in Boston, during his bid for the US Senate.

That address marked the beginning of his national rise as an Illinois state senator. Four years later, he accepted the party’s presidential nomination at Mile High Stadium in Denver.

But the convention speech on Wednesday night is the first of his post-presidency, with his own legacy on the line as he implores Americans to elect Biden and defeat President Donald Trump. The site of his address, which will be broadcast live directly before Harris’ speech, underscores the gravity of the election, the official said.