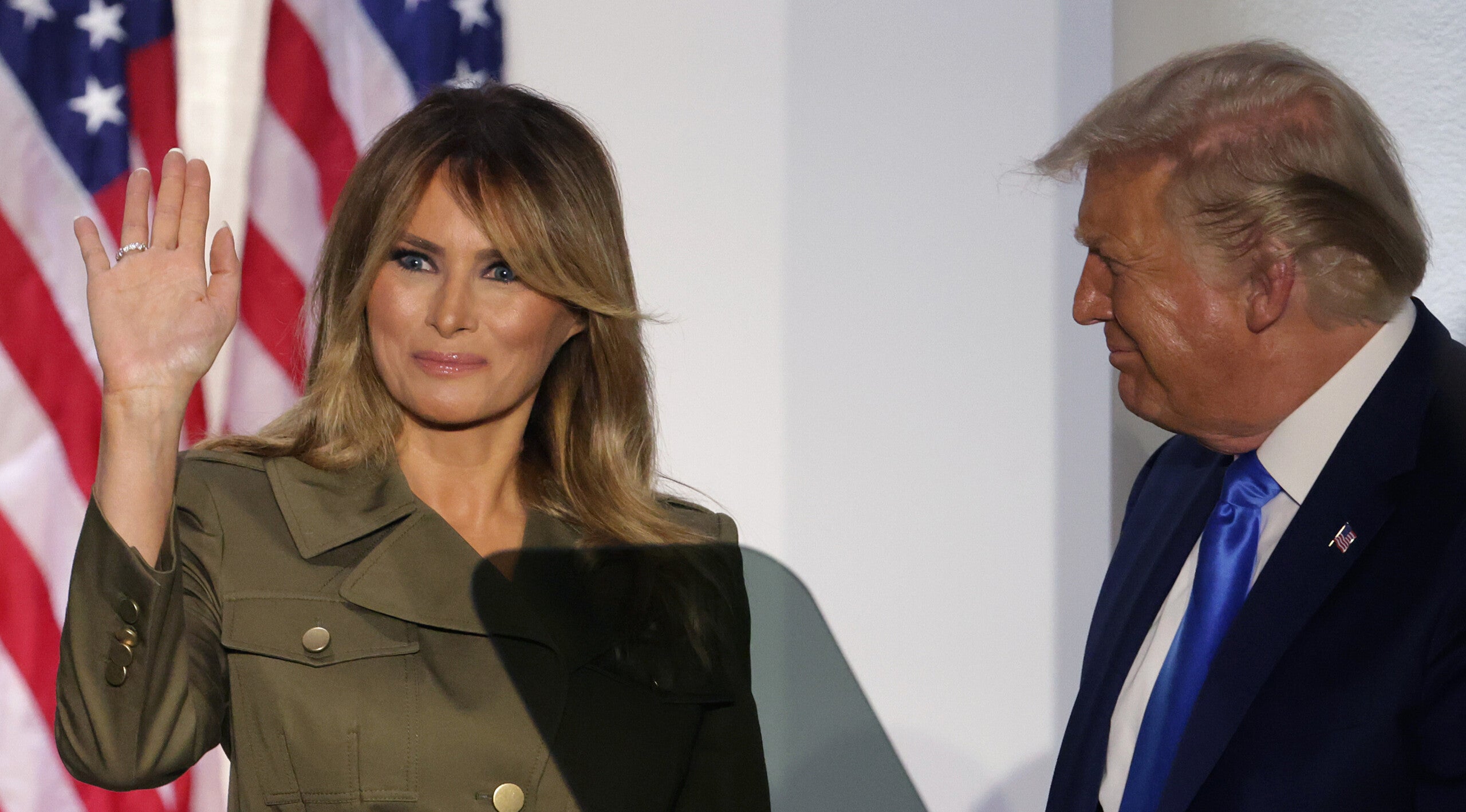 (CNN) — On the second night of the Republican National Convention, GOP organizers sought to broaden President Donald Trump’s appeal by touting economic progress under his presidency, but then zigzagged into efforts to inflame the culture wars in a series of speeches.

The evening opened with a series of searing plays to the Trump base before network television coverage began featuring claims that the economy was roaring back, which discounted the fact that the President’s mismanagement of the pandemic likely made the worst recession since the 1930s even worse.

As part of the effort to use real American workers to shower praise on Trump, the night featured Jason Joyce — an eighth-generation lobsterman from Maine, who said Biden would bend to the whims of environmental extremists — and Cris Peterson, a Wisconsin dairy farmer who said Trump became president in the middle of the “Great Depression” for her industry.

“Our entire economy, and dairy farming, are once again roaring back. One person deserves the credit and our vote, President Donald J. Trump,” Peterson said.

Larry Kudlow then touted Trump’s economic record and his moves to shore up the economy during the pandemic: “It rocked us all back on our heels. But we’re Americans. We’re fighters. And so is our President,” the White House economic adviser said. “He went straight to work to not only protect our safety and our health — but to preserve our jobs and our livelihoods.”

But among the messages of economic hope were also appeals to the party’s base on issues like religious freedom and abortion.

Abby Johnson, an anti-abortion activist, spoke in graphic detail about how an abortion is performed and her experiences when working in a Planned Parenthood clinic prior to her change of heart.

“This election is a choice between two radical, anti-life activists and the most pro-life President we’ve ever had. That’s something that should compel you to action,” Johnson said, adding that Trump’s supporters must vote “and do it with our most vulnerable Americans in mind — the ones who haven’t been born yet.”

Cissie Graham Lynch, the daughter of evangelist Franklin Graham, told the convention that Trump has made religious freedom a centerpiece of his presidency far more than his predecessors, and said a Joe Biden victory in November would mean the faithful would be under attack.

“Our founders did not envision a quiet, hidden faith. They fought to ensure that voices of faith were always welcomed, not silenced. Not bullied,” she said. “But during the Obama-Biden administration, these freedoms were under attack. Democrats tried to make faith organizations pay for abortion-inducing drugs. Democrats tried to force adoption agencies to violate their deeply held beliefs.”

The night also included attacks on Trump’s rival Joe Biden and his son Hunter from former Florida Attorney General Pam Bondi who portrayed Biden as the patriarch of a corrupt and swindling family, recycling conspiracy theories about his son Hunter’s business activities in Ukraine while his father was vice president.

Trump and his allies have repeatedly made unfounded and false claims to allege that the former vice president and his son acted corruptly in Ukraine.

Her claims were especially ironic since Trump is running one of the most scandal-plagued administrations in modern history. He refused to reveal his tax returns like his predecessors and declined to divest himself of his business interests opening him up to huge conflicts of interests. Trump also became only the third President to be impeached over abuses of power when he tried to get Ukraine to intervene in the election to damage Biden.

A scheduled speaker was pulled from the program just before it went to air Tuesday after it came to light that she had retweeted a Twitter thread espousing an anti-Semitic conspiracy theory. The original tweets were sent early Tuesday morning and are now deleted.

Mary Ann Mendoza, whose police officer son was killed by a drunk driver, had been included in a list of excerpts of speakers’ remarks sent by the campaign Tuesday afternoon. But a rundown of speakers sent just before airtime Tuesday did not list her as a speaker.

Melania Trump looked to use her enormous popularity to help address one of the biggest challenges facing Trump in November — his enormous deficit with female voters.

Speaking from the Rose Garden, the first lady gave an uplifting speech reflecting on her work with children, her “Be Best” initiative, her second-term agenda and some of her favorite moments of the past three-and-a-half years as she made the case that her husband should be reelected. Advisers have said that her speech was not vetted by anyone in the West Wing.

She turned the page from the plagiarism controversy that surrounded her 2016 speech when the Trump campaign acknowledged that passages from her remarks had been taken from Michelle Obama’s 2008 speech to the Democratic National Convention, in what was framed as an innocent mistake by a writer who helped her with the speech.

Trump trailed Joe Biden by more than 20 points among women in polls throughout the summer, creating the possibility that he will lose female voters by historic margins in November. The high disapproval of his handling of the pandemic has placed an even greater drag on those numbers and his appeals to the “suburban housewives” of America — a term that fell from favor in the 1960s — do not seem to be helping him gain any traction.

CNN Director of Polling and Election Analytics Jennifer Agiesta notes that exit polls dating back to 1972 show that Democrats have never won a majority of White women. Former President Bill Clinton won White women by 48% to 43% in 1996, but the party has never gotten to the 50% threshold.

Pompeo’s address overlooking Jerusalem was yet another lurch away from official decorum — an example of the kind of move that the Trump team prizes.

In previous administrations, the top US diplomat often avoided the conventions to shield the continuity of US foreign policy from the fury of partisan politics. Yet Trump’s diplomacy — from North Korea to the Middle East and from China to climate change — has often appeared mostly designed to satisfy promises he made to his base.

Officials said Pompeo was not breaking laws, but his decision to speak to the convention is being investigated by Democrats in the House to see if the speech violates the Hatch Act, which prevents federal employees from engaging in partisan politics while on duty, in a federal room or building, wearing an official uniform or insignia or using a government vehicle.

“The President has held China accountable for covering up the China virus and allowing it to spread death and economic destruction in America and around the world, and he will not rest until justice is done,” he said. Other nations also suffered when the virus spread from China to their citizens but were far more successful in getting it under control.

The secretary of state also put a gloss on the failure of Trump’s North Korea diplomacy following his photo op summits with Kim Jong Un. He claimed the President had “lowered the temperature” with the Stalinist state. He was correct to say that Pyongyang has halted long-range missile and nuclear tests. But the US granted Kim the concession he wanted most — a meeting with a US leader and his nuclear program is still progressing.

He also hailed Trump’s strike to kill Iranian intelligence chief Qasem Soleimani, praised a new US-brokered breakthrough between Israel and the United Arab Emirates and highlighted the US exit from the “disastrous” Obama-era nuclear deal with Iran. Like North Korea, the Islamic Republic’s nuclear program is further forward than it was when Trump took office.

Half an hour before the night’s convention programming began, Trump announced the pardon of Jon Ponder, a Black former convict who converted to Christianity and now works for prison reform. Ponder had been imprisoned for bank robbery.

“We believe that each person is made by God for a purpose. I will continue to give all Americans, including former inmates, the best chance to build a new life and achieve their own American dream,” Trump said in a YouTube video filmed at the White House.

Ponder said he had misguidedly believed that the police were his enemies and praised Las Vegas police for social work in assimilating released prisoners and for laying their lives on the line to protect people.

“My hope for our great nation is to continue this path we are on of being the most prosperous country in the world,” Ponder said in the video.

The move appeared designed to highlight Trump’s success in passing criminal justice reform during his first term. But the timing of the pardon also highlighted how the President has used this power under the Constitution in ways that can also benefit him politically.

Ponder’s pardon also fits into Trump’s defense of the police amid a string of shootings of unarmed Black men by officers that helped to trigger the recent nationwide reckoning over race. Ponder credits police in Las Vegas with helping to reintegrate offenders into the community.

He had previously pardoned Alice Marie Johnson a Black woman who was in prison on nonviolent drugs charges and was brought to his attention by Kim Kardashian West. Trump has also pardoned heroes of the conservative movement Dinesh D’Souza, an author, and Bernard Kerik, the former New York police chief who was convicted of felony tax charges.

Most notoriously, Trump this year commuted the sentence of his political trickster Roger Stone, who had been convicted of lying to Congress in part to protect the President.