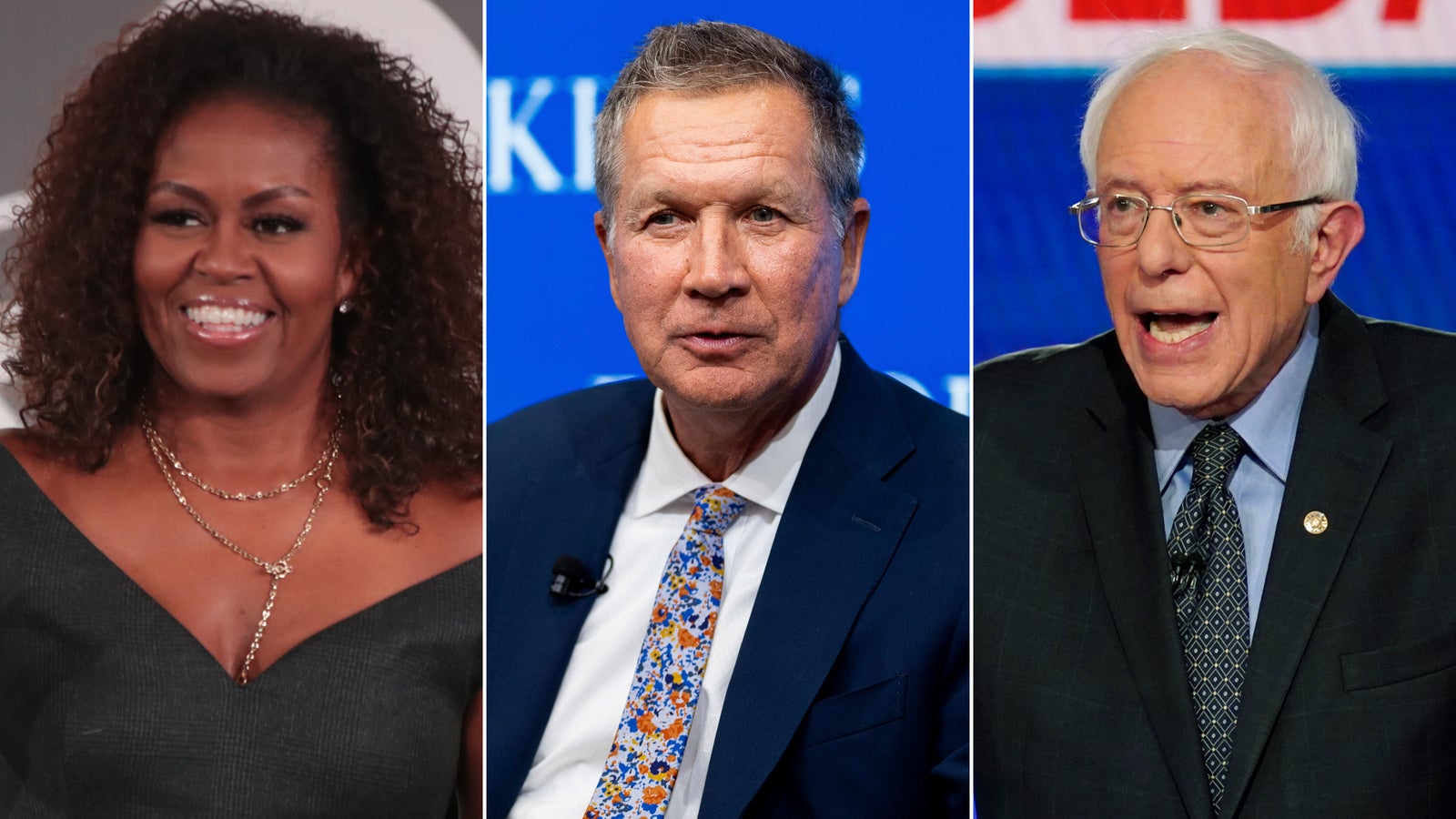 (CNN) — As millions of Americans tuned in to for the first night of the Democratic convention, the party strove to broaden their appeal to frustrated Republicans and independents—weaving together speeches that prosecuted the case against Trump, with stories from real people about the fatal toll of the pandemic and personal stories that were meant to provide a window into Biden’s personal side.

Former first lady Michelle Obama, Vermont Sen. Bernie Sanders and New York Gov. Andrew Cuomo were among headliners for the first night of programming, which is emceed by actress Eva Longoria. But also on the slate were four Republican politicians and a video montage of GOP voters speaking about why they planned to cast their ballots for Biden.

The convention opened with a virtual choir singing the National Anthem and interviews with Americans grappling with the pandemic and the economic strife, voters who were interviewed by Longoria. The subdued proceedings felt unusual without the typical raucous crowd that such events are usually greeted by as the Democratic Party took on the undertaking of the first convention in the time of coronavirus.

There were awkward moments, but also powerful ones, such as when Philonise Floyd — the brother of George Floyd, a Black man who was killed when a White police officer held him down with a knee on his neck — called for a moment of silence to remember Black people killed by law enforcement.

Party officials have said that Monday’s theme will be “We the People” — with remarks focused on how the country can unite and move forward.

Republicans against Trump speak at the DNC

In an effort to broaden the party’s appeal at a time when a new CNN poll shows the race between Biden and President Donald Trump tightening, Democrats turned the microphone over to three Republican women in Monday night’s lineup, as well as former Ohio Republican Gov. John Kasich: Meg Whitman, the 2010 Republican nominee for governor of California, who backed Hillary Clinton in 2016; Susan Molinari, a former Republican congresswoman from New York; and Christine Todd Whitman, who headed the Environmental Protection Agency under President George W. Bush and the former governor of New Jersey.

“What am I doing here? I’m a lifelong Republican,” Christine Todd Whitman said.

“But this isn’t about a Republican or Democrat. It’s about a person: a person decent enough, stable enough, strong enough to get our economy back on track; a person who can work with everyone, Democrats and Republicans, to get things done. Donald Trump isn’t that person; Joe Biden is.”

They spoke to the Biden-Harris campaign’s hope that Republicans frustrated with Trump will be comfortable enough to set aside their party allegiances in November and pull the lever for Biden. The number of “Republicans for Biden” groups have been steadily growing, with high-profile organizations like the Lincoln Project and others gaining significant attention in their fight against Trump.

The Biden campaign decided against including the Lincoln Project in its convention, a senior Democratic official said.

The speech from Kasich, who ran for president as a Republican in 2016, was designed to move Republicans tired of the chaos that Trump has created, but the address was also intended to combat the argument from the Trump campaign that Biden and Harris are tools of the radical left who will push for dramatic structural change. The message from all of the Republicans who spoke was also targeted at independents, who have increasingly drifted toward Biden’s campaign, according to recent polls.

“I’m a lifelong Republican, but that attachment holds second place to my responsibility to my country,” Kasich said. “I’m sure there are Republicans and independents who couldn’t imagine crossing over to support a Democrat. They fear Joe may turn sharp left and leave them behind. I don’t believe that because I know the measure of the man. It’s reasonable, faithful, respectful, and, you know, no one pushes Joe around.”

The inclusion of Republican speakers drew blowback from progressive groups, but a senior Biden adviser said their speeches were intentionally placed on Monday — on the same evening as Sanders — to show that Biden’s candidacy welcomes a broad array of voices.

There has been blowback for their inclusion from progressive groups, but a senior Biden adviser said these speeches were intentionally placed on Monday — on the same evening as Sanders — to show that Biden’s candidacy has a big tent.

Tying together the unity theme of the night, Sanders hoped to galvanize the many young, progressive voters who supported his campaign four months after he abandoned his own White House bid and backed Biden.

He urged Democrats in his speech to come together and “remove the most dangerous President in history,” because “the price of failure is just too great to imagine.”

“Together we have moved this country in a bold new direction showing that all of us—Black and White, Latino, Native American, Asian American, gay and straight, native born and immigrant— yearn for a nation based on the principles of justice, love, and compassion,” Sanders said.

“Our campaign ended several months ago, but our movement continues and is getting stronger every day. Many of the ideas we fought for, that just a few years ago were considered ‘radical,’ are now mainstream. But, let us be clear, if Donald Trump is reelected, all the progress we have made will be in jeopardy.”

It was a stark contrast to the 2016 convention, when Sanders and his delegates kept the pressure on Hillary Clinton and her campaign until the very end, with numerous signs of divisions playing out during votes on the party’s platform and on the convention floor.

Biden and Sanders have not seen each other in person since that one-on-one debate in March but the two speak regularly, the aide said, as their teams have worked closely since April on policy and efforts to unite the party.

Sanders spent much of his speech criticizing Trump, including eviscerating the President’s handling of the coronavirus pandemic.

“Nero fiddled while Rome burned; Trump golfs. His actions fanned this pandemic resulting in over 170,000 deaths and a nation still unprepared to protect its people,” Sanders said.

There are fireworks expected from the former first lady, one of the most admired figures in the Democratic Party.

Michelle Obama will deliver a sharply worded critique of Trump as “the wrong President for our country,” calling him a leader who is unfit for office and “in over his head,” an adviser told CNN’s Jeff Zeleny.

In her taped address, she will also serve as a character witness for Biden, who she will call “a profoundly decent man guided by his faith” and someone who served as a “terrific vice president” to her husband.

“He knows what it takes to rescue an economy, beat back a pandemic and lead our country. And he listens,” Michelle Obama said in the released video. “He will tell the truth and trust science. He will make smart plans and mange a good team and he will govern as someone who has lived a life the rest of us can recognize.”

The former first lady plans to highlight Biden’s empathy explained through the many losses he has weathered in his life, from the car accident that claimed the life of his first wife and his daughter to the death of his son, former Delaware Attorney General Beau Biden, who died from brain cancer in 2015 at the age of 46.

“Joe knows the anguish of sitting at a table with an empty chair. Which is why he gives his time so freely to grieving parents,” Obama said in the video, adding that Biden also hands out his personal phone number to children trying to overcome a stutter as he did as a young man. “His life is a testament to getting back up. And he is going to channel that same grit and passion to pick us all up — to help us heal and guide us forward.”

Biden’s lead over Trump among registered voters has shrunk significantly since June, according to a new CNN poll conducted by SSRS. But his selection of Harris, the junior senator from California and former attorney general of California, as his running mate has drawn largely positive reviews, according to the poll.

Trump’s record on race in the spotlight

Washington, DC, Mayor Muriel Bowser described the moment in her city when the Trump administration ordered riot police to move in on peaceful protesters in early June to clear Lafayette Square for a presidential photo op.

“He stood in front of one of our most treasured houses of worship and held a Bible for a photo op,” Bowser said, referring to Trump’s appearance in front of St. John’s Church across from the White House. “He sent troops in camouflage into our streets. He sent tear gas into the air — and federal helicopters, too. I knew if he did this to DC, he would do it to your city or your town. And that’s when I said, ‘Enough.’ I said ‘enough’ for every Black and Brown American who has experienced injustice; ‘enough’ for every American who believes in justice.”

Bowser said she commissioned Black Lives Matter Plaza in Washington “as a place where we could come together to say: ‘Enough.’ “

“By coming together this November to elect Joe Biden and Kamala Harris, we will say: ‘Next,'” she said.

Bowser introduced Philonise Floyd, who called for justice for other Black men and women who have been killed by police and then remembered his brother with a moment of silence.

“George had a giving spirit, a spirit that has shown up on the streets around our nation, and around the world—people of all races, all ages, all genders, all backgrounds—peacefully protesting in the name of love and unity,” Floyd said, mentioning the names of others who have died in police custody, including Breonna Taylor, Ahmaud Arbery and Eric Garner.

“It’s up to us to carry on the fight for justice,” he said. “Our actions will be their legacies.”

During the moving moment of silence that followed, the Democrats’ convention feed showed voters around the nation reflecting on their deaths with their heads bowed.