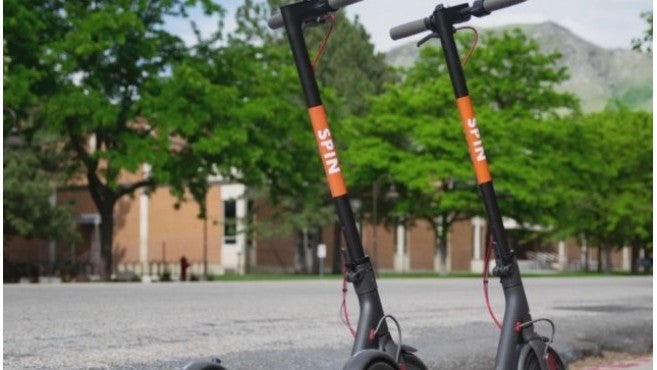 WEST LAFAYETTE, Ind. (WLFI) — You can expect electric scooters to return to the streets of West Lafayette within the month. The West Lafayette Board of Works approved the applications for the companies Spin and Gotcha Tuesday morning.

Bird, the company that unexpectedly dropped off scooters last year, has not applied. Director of Development Erik Carlson said the city has not heard from Bird since the company was asked to pull 1,700-3,000 scooters in December.

Carlson said Spin and Gotcha will each drop off 150 scooters. If the city expands its applications, the companies will then continue to split the total. Both companies have local employees who can answer questions and deal with situations, unlike Bird. Carlson said the city expects better communication and uniformity in the way the scooters are deployed.

The scooters, similar to Bird, will cost $1 to start and 15 cents per minute following and are app-based. However, following the city’s ordinance, you can access the scooters without a smart phone. Carlson said you can call a representative and the scooter can be operated with a hard card.

Carlson said the scooters will be allowed to operate in Lafayette and on Purdue’s campus. However, they will be relocated every morning to West Lafayette.

The city’s ordinance, passed in March, also requires lower rates for those who can’t afford to ride the scooters. Carlson said that can be accessed by contacting the company and showing proof of income.

The application includes companies paying a $15,000 permit fee to the city. In addition, scooter companies will also have to pay $1 per day, per scooter.

Riders are not allowed to ride on sidewalks or “shared paths” and must be over 16 years old. The scooters are also expected to be parked in designated areas and can’t go faster than 15 mph. The ordinance also says users are encouraged to wear helmets.

The ordinance states there will be a $25 fee for illegally parked scooters. There is also a $100 fee to remove the scooter and a $10 storage fee per day.

Carson said you can expect Gotcha scooters to be dropped off in 30-60 days. He said Spin Scooters will arrive sooner than that because the company will be using the same staff as Zagster bikes, which already are established in the city.