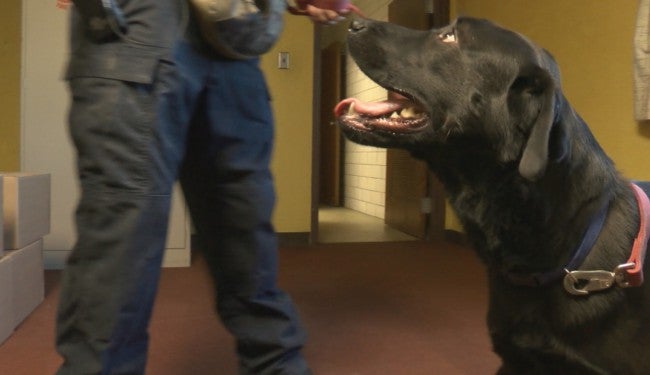 ANDERSON, Ind. (WISH) — Investigators analyzed thousands of text messages, emails, pictures and videos to bust Jared Fogle and Russell Taylor. To be sure they got all the evidence, they sent an electronic-sniffing dog through Fogle’s home last month.

The K-9’s owner said there are four dogs in the country trained to sniff out electronics, including computers, iPads, jump drives, and even small memory cards. Officials said the dog found devices in Jared’s house that helped the investigation.

He’s a black dog named Bear, and he’s a lot like any other two-year-old lab. He likes to play, and he loves his treats.

But most other dogs have never searched Jared Fogle’s property.

“I had no idea until the morning of what house I was actually going to,” owner and trainer Todd Jordan said. “Once I found out who it was, yeah, it makes a little more nerve racking for us.”

Two weeks before the raid, investigators called Jordan and said they’d need his help. They knew what Bear was capable of.

To show off Bear’s skills Thursday, Jordan hid electronic devices throughout a room and put Bear to work. In less than ten minutes, the dog found a small memory card in a book bag, a flash drive in a box, and an iPad in a filing cabinet.

“It’s just like any other K-9 training, like with the narcotics or explosives or anything,” Jordan said. “You get the dog used to the odor and reward them as they indicate on it.”

Bear’s reward is food. Jordan keeps a pouch of dog food with him as he guides the dog.

Jordan and Bear have been a team for a year now. But when Jordan’s dogs are fully trained, he sometimes sells them to law enforcement agencies that need the help.

After the Fogle raid, Seattle PD reached out to Jordan. Now Bear is headed west.

“It’ll be bittersweet,” he said. “It’s sad to see him go, but the type of work he’s doing, it’s very rewarding.”

“He’s probably one of the sweetest dogs I’ve ever worked with,” Jordan said.

Bear is moving to Seattle this month. The Fogle investigation was the fifth case he has worked on.