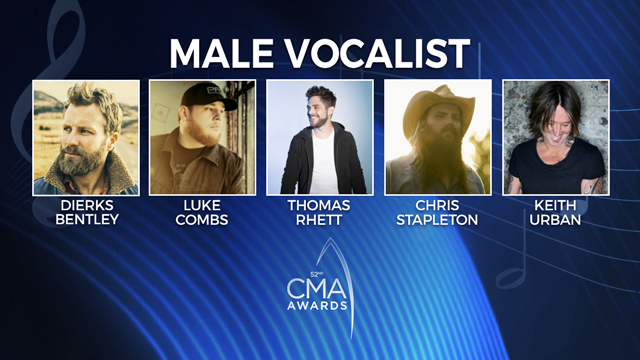 There’s just one difference to the 2018 Male Vocalist of the Year nominees than last year.

Luke Combs is the lone newcomer to the fray and he brings some heavy hitting songs to the group.

Combs became popular on Facebook before he was topping the charts, and his audience followed him to the radio. His first song, “Hurricane,” finished 2017 at No. 3 on the Hot Country chart. His follow-up single, “When it Rains it Pours,” finished the year just outside the top 10.

His third single, which was his third No. 1, aptly named “One Number Away,” could land combs his first CMA award.

The rest of nominees find themselves in familiar territory.

Chris Stapleton, who is looking to win the award for the fourth straight year, is nominated again. His resume speaks for itself, and he’s nominated for four other CMA Awards this year.

That being said, Stapleton’s body of work this award season is a little bit weaker than years past. The guy deserves a break though, right?

Stapleton released volume 2 of his From a Room collection, and it was a big hit. The album debuted at No. 2 on the Billboard charts. He became the first country artists to release two top 2 albums in the same year since Luke Bryan did it five years ago.

Thomas Rhett will be looking to add to his trophy case with his first Male Vocalist of the Year win.

Rhett released a new album, Life Changes, this year, and four singles off that record went No. 1 on the Country Airplay charts.

He was also named country artist of the year at the 2018 iHeart Country Music Awards, which could be a decent indicator of what could happen in November.

Keith Urban is also nominated this year. He’s won the award three other times before but has not won since 2006.

This year, Urban released Graffiti U, his eleventh studio album. The record ended up at No. 1 on the Top Country Albums chart and No. 2 on the Billboard all genres chart. One of the singles from that album, “Coming Home,” also went to the top of the charts.

Urban supported that album release with a huge world tour. He’s right in the middle of making 72 different stops on the tour including 63 in North America.

Finally, Dierks Bentley is looking for his first Male Vocalist of the Year trophy. Surprisingly, it would only be his fourth CMA Award ever.

Bentley is coming off the release of his album The Mountain. The first single off that record, “Women, Amen” skyrocketed to No. 1 on the Country Airplay charts.

The album itself went to No. 1 also on the Country charts. Bentley has also played more than 25 shows this year to support his album.

No matter who wins the award in November, it’s sure to be a historic one.