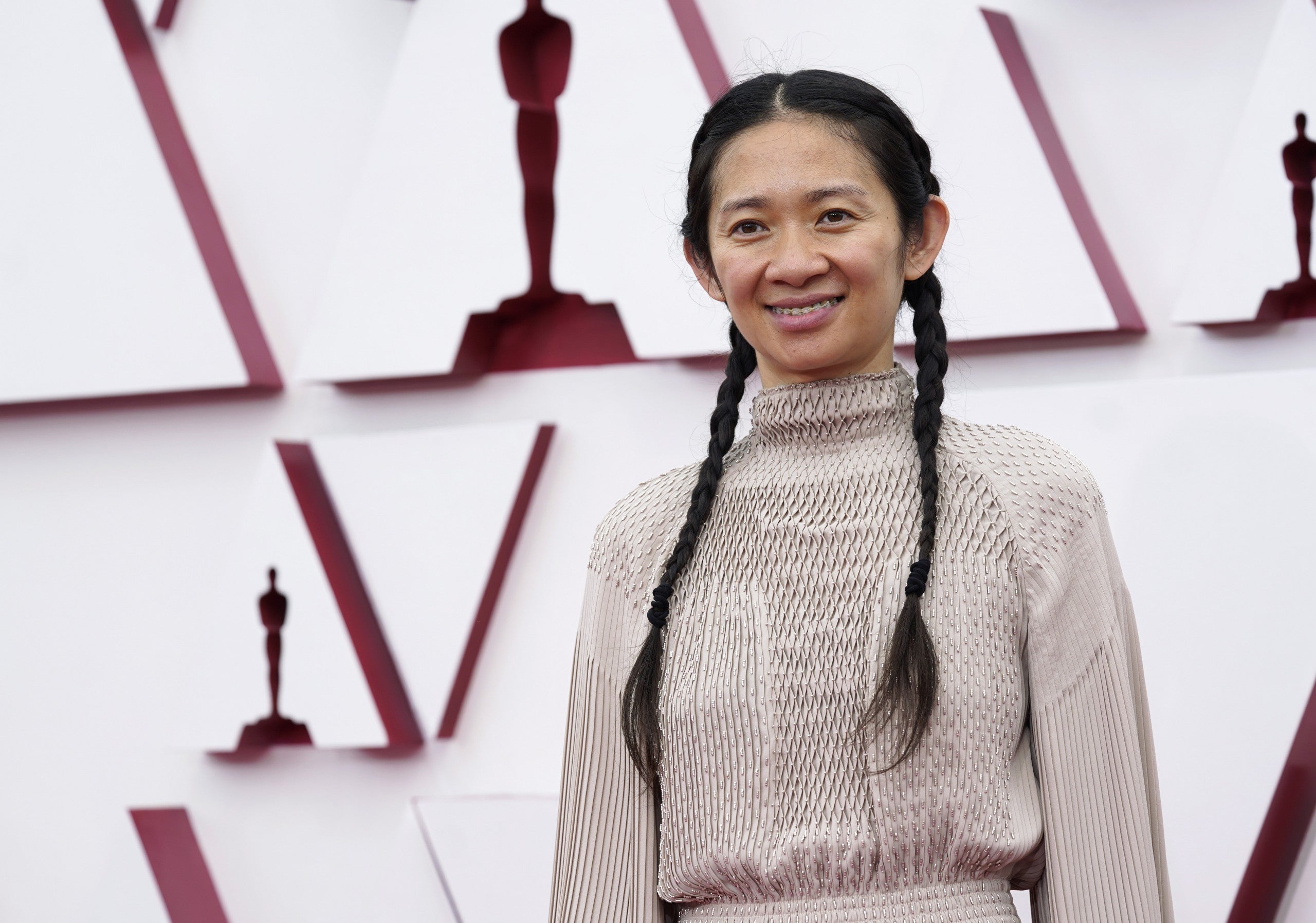 At a socially distanced Oscar ceremony retooled for the pandemic, Chloé Zhao made history Sunday. The “Nomadland” filmmaker won best director, becoming just the second woman in the 93 years of the Academy Awards to win the award and the first woman of color.

Only Kathryn Bigelow, 11 years ago for “The Hurt Locker,” had previously won the award. The win, widely expected, caps the extraordinary rise of the China-born Zhao, a lyrical filmmaker whose “Nomadland” is just her third feature. Her film, the favorite to win best picture, is a wistful open-road drama about itinerant life in the American West.

The 93rd Academy Awards, the most ambitious award show held during the pandemic, rolled out a red carpet and restored some glamour to a movie institution, but with a radically transformed — and in some ways downsized — telecast.

The ceremony — fashioned as a movie of its own — kicked off with opening credits and a slinky Regina King entrance, as the camera followed the actress and “One Night in Miami” director in one take as she strode with an Oscar in hand into Los Angeles’ Union Station and onto the stage. Inside the transit hub, nominees sat a cozy, lamp-lit tables around an intimate amphitheater.

Daniel Kaluuya won best supporting actor for “Judas and the Black Messiah.” The win for the 32-year-old British actor who was previously nominated for “Get Out,” was widely expected. Kaluuya won for his fiery performance as the Black Panther leader Fred Hampton, whom Kaluuya thanked for showing him “how to love myself.”

Hairstylists Mia Neal and Jamika Wilson of “Ma Rainey’s Black Bottom” became the first Black women to win in makeup and hairstyling. Ann Roth, at 89 one of the oldest Oscar winners ever, also won for the film’s costume design.

The night’s first winner was Emerald Fennell, the writer-director of the provocative revenge thriller “Promising Young Woman,” for best screenplay. Fennell, winning for her feature debut, is the first woman win solo in the category since Diablo Cody (“Juno”) in 2007.

The broadcast instantly looked different. It’s being shot in 24 frames-per-second and in more widescreen format — more like a movie. In a more intimate show without an audience beyond nominees, winners were given wider latitude in their speeches.

“It has been quite a year and we are still smack dab in the middle of it,” said King in the opening.

King explained how Sunday’s Oscars were even possible — testing, vaccinations, social distancing and more testing. The safety protocols, she said, echoed those of film shoots during the pandemic.

The telecast, produced by a team led by filmmaker Steven Soderbergh, moved out of the awards’ usual home, the Dolby Theatre, for Union Station. With Zoom ruled out for nominees, the telecast included satellite feeds from around the world. Performances of the song nominees were pretaped and aired during the preshow, including “Husavik (My Hometown)” from “Eurovision Song Contest: The Story of Fire Saga.,” in the Iceland town’s harbor. Other performances were made from the top of the film academy’s new $500 million museum.

The red carpet was back Sunday, minus the throngs of onlookers and with socially distanced interviews. Only a handful of media outlets were allowed on site, behind a velvet rope and some distance from the nominees. Casual wear, the academy warned nominees early on, was a no-no. During the Oscar preshow, nominees gathered at an outdoor set at Union Station that resembled an open-air cocktail lounge.

But even good show may not be enough to save the Oscars from an expected ratings slide. Award show ratings have cratered during the pandemic, and this year’s nominees — many of them smaller, lower-budget dramas — won’t come close to the drawing power of past Oscar heavyweights like “Titanic” or “Black Panther.” Last year’s Oscars, when Bong Joon Ho’s “Parasite” became the first non-English language film to win best picture, was watched by 23.6 million, an all-time low.

Netflix dominated this year with 36 nominations, including the lead-nominee “Mank,” David Fincher’s black-and-white drama about “Citizen Kane” co-writer Herman J. Mankiewicz. The streamer is still pursuing its first best-picture win; this year, its best shot may be Aaron Sorkin’s “The Trial of the Chicago 7.”

But the night’s top prize, best picture, is widely expected to go to Zhao’s “Nomadland,” a contemplative character study about an itinerant woman (Frances McDormand) in the American West.

Sunday’s pandemic-delayed Oscars bring to a close the longest awards season ever — one that turned the season’s industrial complex of cocktail parties and screenings virtual. Eligibility was extended into February of this year, and for the first time, a theatrical run wasn’t a requirement of nominees. Some films — like “Sound of Metal” — premiered all the way back in September 2019. The biggest ticket-seller of the best picture nominees is “Promising Young Woman,” with $6.3 million in box office.

Lately, with vaccinations expanding, signs of life have begun to show in movie theaters — most of which are operating at 50% capacity. But it’s been a punishing year for Hollywood. Around the world, movie theater marquees replaced movie titles with pleas to wear a mask. Streaming services rushed to fill the void, redrawing the balance between studios and theaters. Just weeks before the Oscars, one of Los Angeles’ most iconic theaters, the Cinerama Dome, along with ArcLight Cinemas, went out of business.

After the pandemic, Hollywood — and the Oscars — may not ever be quite the same. Or as WarnerMedia’s new chief executive Jason Kilar said when announcing plans to shift the studio’s movies to streaming: “We’re not in Kansas anymore.”