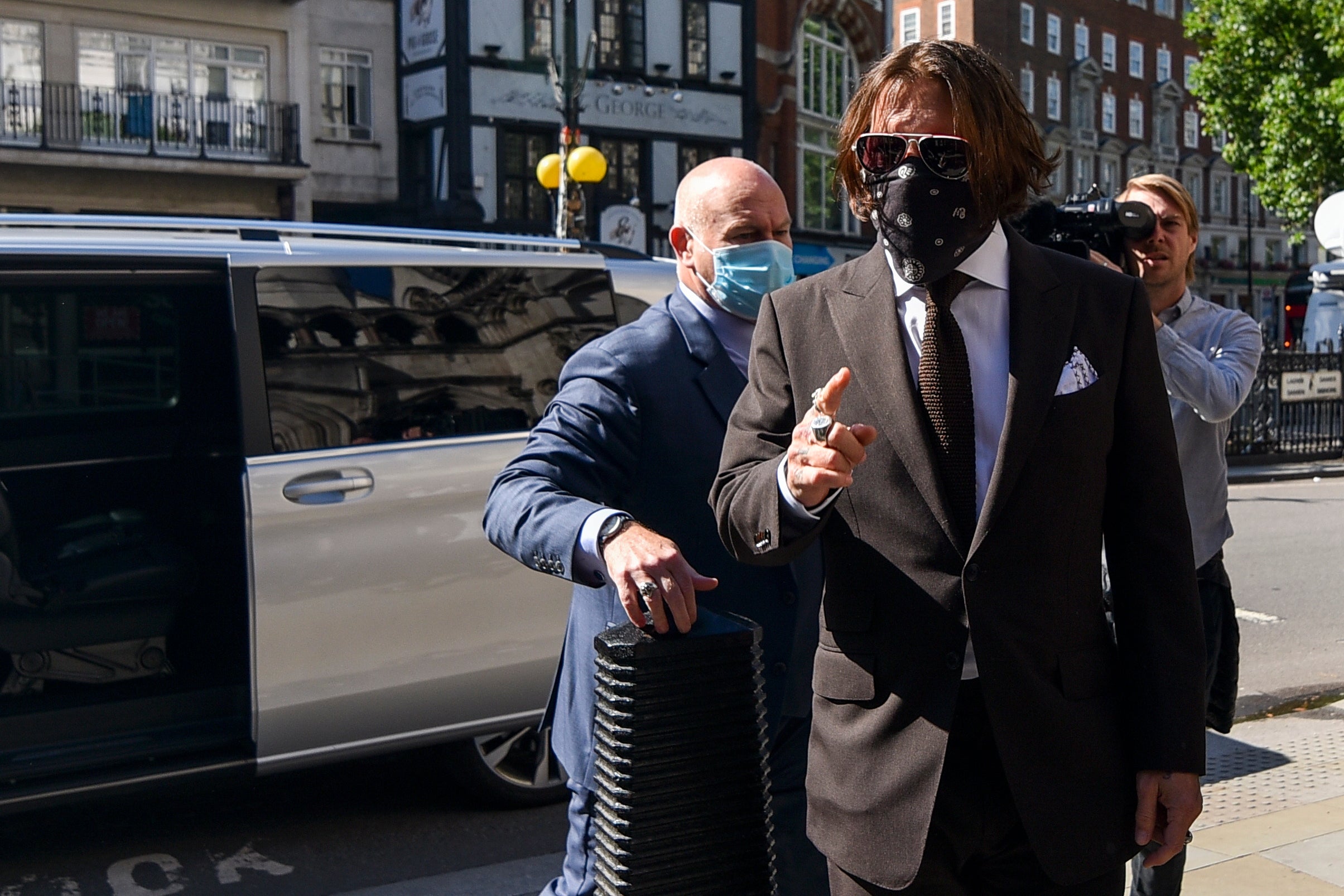 Johnny Depp arrives at the High Court in London, Friday July 10, 2020. Depp is back in the witness box at the trial of his libel suit against a tabloid newspaper that called him a "wife-beater" in an April 2018 article that said he'd physically abused ex-wife Amber Heard. Depp strongly denies the allegations.(AP Photo/Alberto Pezzali)
by: JILL LAWLESS Associated Press
Posted: Jul 10, 2020 / 11:18 AM EST / Updated: Jul 10, 2020 / 11:18 AM EST

LONDON (AP) — Johnny Depp said in a London court on Friday that he was left embittered by ex-wife Amber Heard’s claims he abused her, which turned him from “Cinderella to Quasimodo” in the public eye.

He also said the couple’s tempestuous marriage broke down for good after an incident in which he accused Heard or one of her friends of defecating in the couple’s bed.

“I thought that was an oddly fitting end to the relationship,” he said.

Depp was concluding almost four days of evidence in his libel case against a British tabloid newspaper that accused him of physically abusing Heard. The Hollywood star is suing News Group Newspapers, publisher of The Sun, and the paper’s executive editor, Dan Wootton, over an April 2018 article that called him a “wife-beater.”

In the High Court witness box, Depp has described a volatile relationship with Heard that descended into screaming matches which sometimes turned physical. But he has strongly denied hitting Heard and accused her of compiling a dossier of fake claims against him as an “insurance policy.”

Depp, 57, and Heard, 34, met on the set of the 2011 comedy “The Rum Diary” and married in Los Angeles in February 2015. Heard, a model and actress, filed for divorce the following year and obtained a restraining order against Depp on the grounds of domestic abuse. The divorce was finalized in 2017.

Depp said one of the triggers for the couple’s separation came when a cleaner found feces in a bed at their Los Angeles penthouse the morning after Heard’s 30th birthday party in April 2016. Heard claims the couple fought after the party and Depp threw a magnum wine bottle at her. He denies it.

Heard blamed one of the couple’s Yorkshire terriers, Pistol and Boo, for the defecation incident, but Depp was convinced a person had done it.

“It was not left by a three- or four-pound dog. I was convinced that it was either Ms Heard herself or one of her cohorts involved in leaving human feces on the bed,” he said.

He said he initially laughed at the “absurd” incident, with one text message referring to “Amber Turd.”

But soon after, he said, he realized that the marriage couldn’t be saved.

“I wanted nothing to do with her,” Depp said.

The court was read a text message Depp sent Heard after their separation in which he sent “all my love and regrets … I wish you nothing but good.”

“That is what I felt,” he said. “I didn’t think there needed to be any poison at that time, because the bad part was over, which was the relationship, and now we just had to finish it.”

By June 2016, however, Depp said he had become “quite bitter” because he felt he was being publicly depicted as “a wife beater.”

Heard obtained a restraining order against Depp in May 2016, claiming he’d hit her and thrown a cellphone at her during an argument, bruising her cheek. Depp denies the allegation.

“I went, if you’ll forgive the analogy, from Cinderella to Quasimodo in 0.6 seconds and I was without a voice,” he said.

That August, Depp wrote in a text to an associate that Heard was “begging for total global humiliation … She’s gonna get it.”

The Sun’s defense relies on a total of 14 allegations by Heard of Depp’s violence between 2013 and 2016, in settings including his private island in the Bahamas, a rented house in Australia and a private jet. He strongly denies all of them.

Under cross-examination by The Sun’s lawyer, Sasha Wass, Depp depicted a tumultuous relationship with Heard during a period when he was trying to kick drugs and alcohol, and sometimes lapsing.

He recalled telling Heard several times: “Listen, we are a crime scene waiting to happen.” But he denied being violent.

The Sun’s lawyer alleged that during a fight at the LA penthouse in December 2015, Depp, in “an uncontrollable rage,” trashed Heard’s wardrobe, threw a decanter at her, slapped her, pulled her by the hair and headbutted her, causing two black eyes.

Depp claimed Heard was the aggressor, and he had only tried to restrain her “to stop her flailing and punching me.” He conceded he might have headbutted her, but only by accident, and denied causing her injuries.

Depp also rejected Heard’s claim that he subjected her to a “three-day ordeal of assaults” in March 2015 in Australia, where Depp was appearing as Captain Jack Sparrow in the fifth “Pirates of the Caribbean” film.

He agreed that the couple had an altercation, which ended up with their house being trashed and Depp’s fingertip being severed to the bone.

Depp accuses Heard of cutting off his fingertip by throwing a vodka bottle at him. She denies being in the room when the digit was severed.

A short section of Friday’s hearing, which related to allegations of sexual violence, was heard in private after the judge agreed to a request by The Sun’s lawyers.

Near the end of his testimony, Depp was asked by his lawyer, David Sherborne, about medical notes from August 2014 that referred to Heard’s “history of substance abuse,” including an addiction to cocaine. The notes said Heard experienced anxiety, insecurity and jealousy and had “severe outbursts of anger and rage.”

The lawyer asked Depp whether the description tallied with his experience of Heard.

Heard is attending the three-week trial and is scheduled to testify next week.