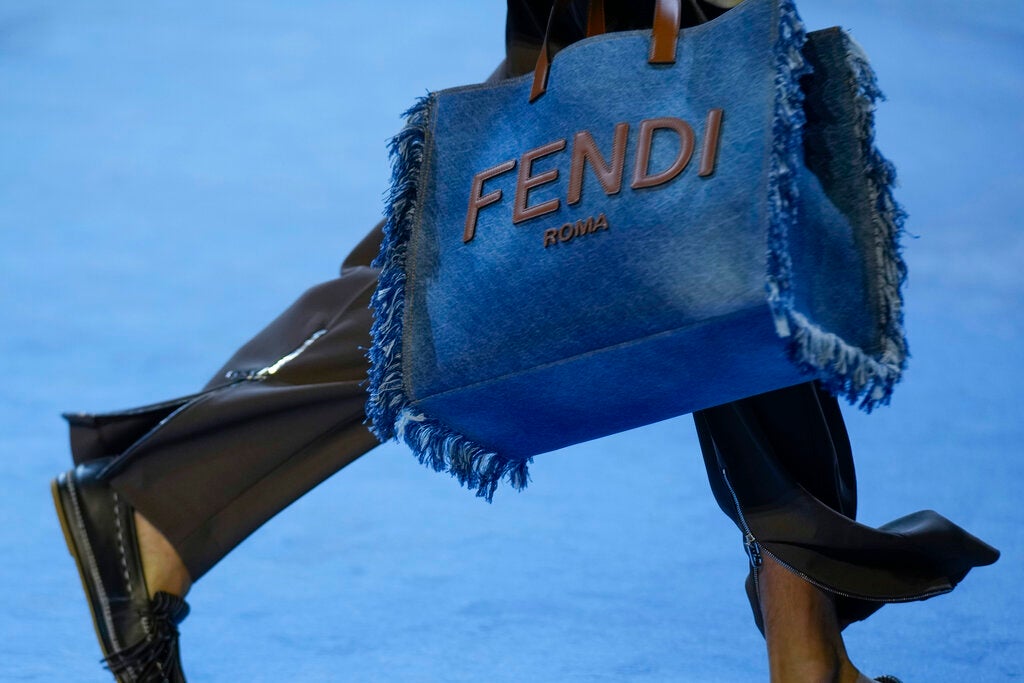 MILAN (AP) — Denim, fringe and chunky rubber sliders. These are the elements of next year’s summer wardrobe emerging from the second day Saturday of Milan Fashion Week menswear previews.

Temperatures in Milan were unusually high and the fashion crowd scooted from show to show with the thermometer topping 34 C (93 F) and forecast to keep getting hotter in the coming days. That makes linen an easy sell, but less so for the leather and even fur making appearances on Milan’s Spring-Summer 2023 runways.

Milan designers Fendi, Armani and Dolce&Gabbana sought to invoke joy with collections that beckoned a return to leisure and some notes of nostalgia. Highlights from Saturday’s shows:

Silvia Venturini Fendi created earthy, grounded looks for a planet-conscious generation in shades that ranged from soothing chambray to hearty ochres, merging into a new motif created from images of swirling weather patterns of planet Earth.

The collection carried some nostalgia for more innocent times, from fraying hems on jeans to soft seams on denim bags, embroidery accents that recall beaded daisy chains and long, lush tassels on moccasins. Bucket hats are cut out for a visor feel, while knit cloches sport brims. Chunky rubber slip-ons were emblazoned with the inverted double-F logo.

For an easy day look, denim trousers were worn with knitwear in matching tones, accompanied by faded denim Fendi shoppers with a long, fringe crossbody strap. For the beach, there were short shorts in linen with soft zipped jackets and sturdy-soled slip-on loafers. On the more dressy end, roomy Bermuda’s shorts in cream paired with a camel jacket and ochre zipper back, with the cutout bucket hat.

The swirling patterns of Earth showed up on jacquard coats and intarsia knitwear and fur, and on a pair of ample coveralls. Bags included duffel-bucket combo shaped by the word FENDI cut out in leather; a denim Peekaboo incorporated as an external water bottle holder and bright shoppers were made out of recycled plastic.

“It’s about a balance of decoration and simplicity,” Venturini Fendi said in show notes. “An ageless sense of freedom to play, as we rediscover the luxury of free time.”

Domenico Dolce and Stefano Gabbana reached back into their archives for a new collection dubbed “Re-edition” that takes inspiration from the past, but is updated for the moment.

As if cleaning the slate, designers opened the show with a barefoot model in a white tank and briefs.

Dolce&Gabbana mixed distressed elements with tailored pieces for a high-low fashion appeal. The fashion house’s traditional lace tops were updated with a grungily distressed back, giving the otherwise dressier piece some streetwear credibility. Fraying jeans were worn with a black jacket and white shirt unbuttoned to the waist — as with the entire Re-edition collection, each piece carried a label establishing the original year of issue and the 2023 season update, for a dose of now and then.

“I love the freedom of expression that they have,” said stylist Apuje Kalu, who took in the show from the front row alongside NFL quarterback Tyrod Taylor and NBA players Rudy Gay, Jaren Jackson Jr. and Corey Kispert. “That use of color, texture and print, they are not afraid of doing that for men. You don’t always see that.”

The Emporio Armani collection carried the carefree waft of summer, from light chambray tones to faded coral prints. The sense of the looks was that it’s time to return to the simple pleasures.

Soft shirts, gilets and jackets, with dramatic flaps, high necks or zipper accents, were paired with streamlined cargo shorts or pleated trousers, often with informal slits up the leg.

Beachier looks, including drawstring pants and sheer knitwear, were finished with chunky rubber slip-ons, while more urban sophisticated tailored looks — including a series of black-and-white combo suits — were grounded with thick-soled black shoes.

As if to underline the need for joy, a reggae dancer jaunted down center stage to close the show.