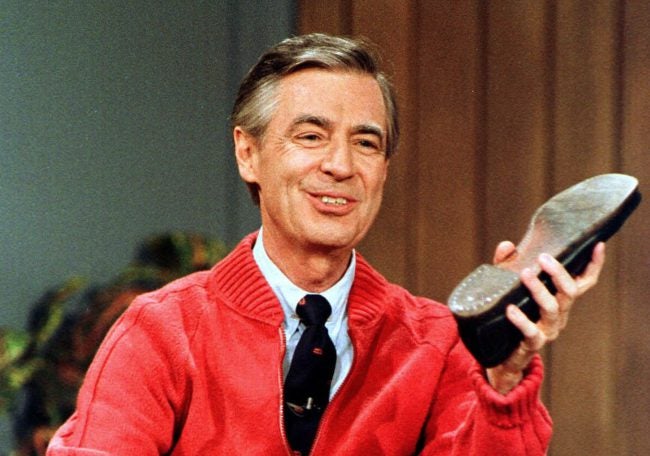 (CNN) — It was a beautiful day in the neighborhood, despite the steady rain, as Florida’s Rollins College unveiled an enormous statue of legendary children’s TV host Fred Rogers this week.

The bronze statue is more than 7 feet tall, weighs more than 3,000 pounds, and depicts the “Mister Rogers’ Neighborhood” star and his puppet pal Daniel Tiger surrounded by adoring children.

He’s wearing one of his famous cardigans and a pair of sneakers that he changed into at the beginning of every episode.

The statue, called “A Beautiful Day for a Neighbor,” was created by British sculptor Paul Day and took 11 months and more than 4,000 hours to complete, according to the Rollins College website.

The back of the statue features the castle from the Neighborhood of Make-Believe and some of its puppet residents.

At Thursday’s unveiling, a choir sang “Won’t You Be My Neighbor,” which Rogers sang on his the show that ran for 31 seasons and had 895 episodes.

Some of Rogers’ family members were at the ceremony and said that the sculpture captured his essence.

“That’s all really him. He didn’t come home and put a sweater on and tennis shoes on, but he was very gentle. He was not an actor. It was all true blue,” son John Rogers said.

“It shows Fred doing what he did all the time, and the children, the attitude of the children matches beautifully, the way they always looked as I remember them with him,” Rogers’ nephew Daniel Crozier said. Crozier is a composer and is a professor at the college.

Rogers, who died in 2003, graduated from Rollins College in 1951 with a degree in music, and the school describes him as its most famous alum on its website.

The school has a collection of Rogers’ books, handwritten letters, and other artifacts. A pair of his sneakers and a cardigan that his mom knitted for him are on display in its library.