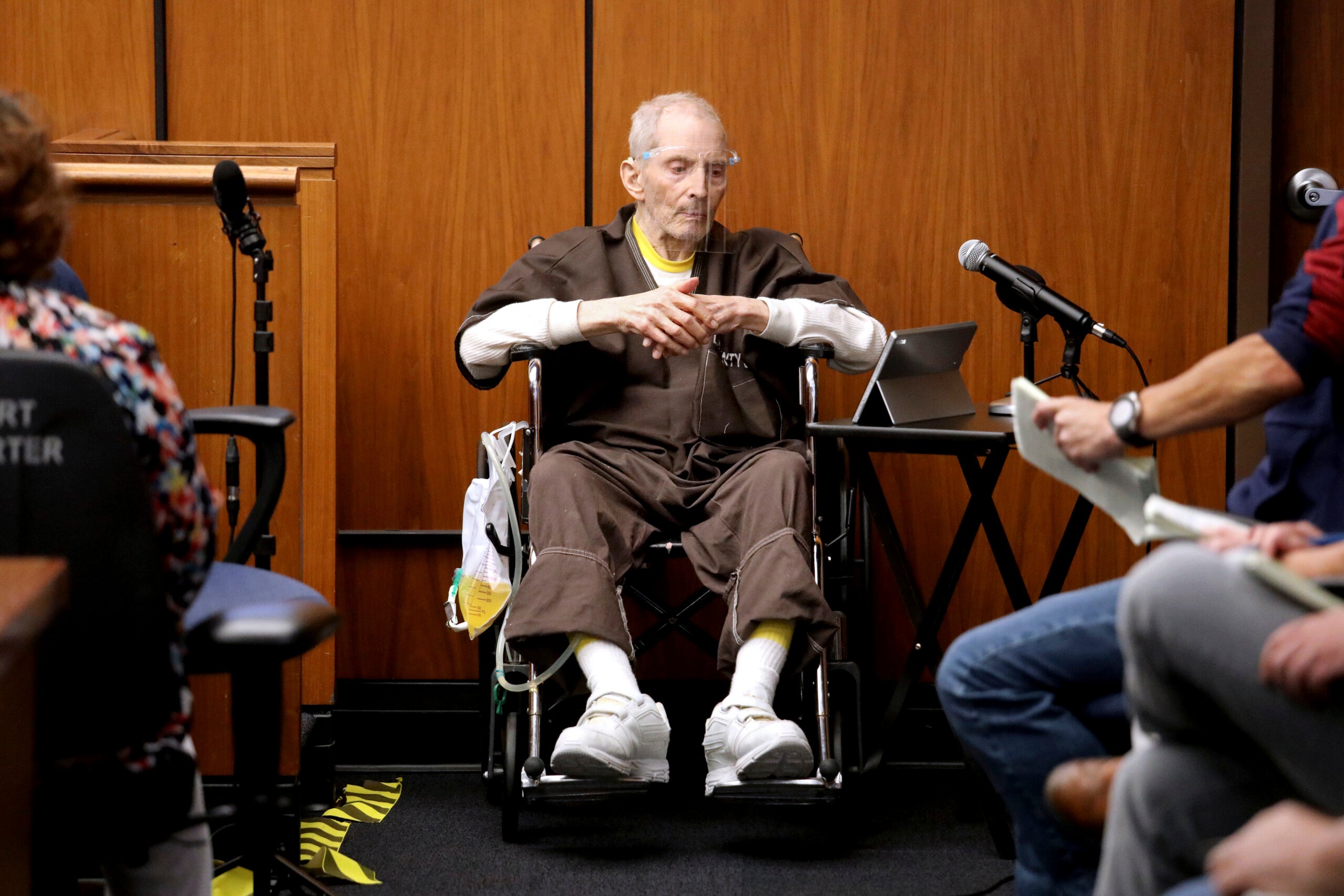 LOS ANGELES (AP) — Robert Durst took the stand at his California murder trial Monday and immediately denied killing his best friend, who prosecutors say was about to reveal to investigators his involvement in the 1982 disappearance of his wife.

“Do you know who did?” DeGuerin asked.

“No, I do not,” answered Durst, who struggled to hear, strained to speak and appeared extremely frail as he sat in a wheelchair instead of a witness chair.

Berman was shot in the back of the head and killed in 2000 in her Los Angeles home. She had been Durst’s best friend for decades and acted as his de facto spokesman after the disappearance of his wife, Kathie, who was later declared dead, though no body was found.

Durst was arrested on a warrant in Berman’s killing in New Orleans in 2015 on the eve of the airing of the final episode of “The Jinx,” the HBO documentary series about him in which Durst made several seemingly damning statements.

As he said he would when the trial began in Los Angeles Superior Court more than a year ago — before the coronavirus forced a long delay — DeGuerin went through with the risky move of calling a murder defendant to testify. He did the same at Durst’s 2003 Texas trial, when the wealthy heir was acquitted.

After asking him bluntly whether he had killed Berman, DeGuerin backtracked to the beginning of Durst’s life.

Durst’s mother died when he was 7 years old, either jumping or falling from the top of their home.

Durst testified that his grandfather woke him in the middle of the night to look at “mommy on the roof” just before her death.

Durst said his father, real estate magnate Seymour Durst, was determined to remain in the family home, no matter the trauma it caused him.

“I kept begging my father to move,” Durst said, “but he never sold the house where his wife died.”

Durst said he did all he could to get away after that.

“I ran away from everywhere.”

While he is charged with just one killing, prosecutors have been allowed to present evidence from the Texas case. There, Durst testified that his Galveston neighbor Morris Black was killed in a struggle after entering his home with a gun. From the stand, Durst described chopping up and disposing of the body, but the jury found him not guilty of murder.

Prosecutors have also been allowed to present evidence that Durst killed his wife. He has never been charged in her disappearance, and has denied having anything to do with it.

He spent much of Monday’s testimony describing the happy early years of their marriage after meeting her when she worked at a dentist’s office just out of high school.

“Kathie was ecstatic. I was ecstatic. We were both very much in love,” Durst said of their wedding day, his 30th birthday, in 1973, calling a light-brown suit shown in a photo “my hippie uniform.”

Eschewing the family business, he and Kathie instead opened a small general store in Vermont that sold health food and other supplies.

“You could have any kind of toothpaste you wanted, as long as it was Colgate,” Durst said.

The store was called, he testified, “All Good Things.” The name was used as the title of a film based on the couple’s life, with Ryan Gosling playing Durst and Kirsten Dunst playing Kathie. Clips from the 2010 movie have been played during the trial.

Durst also described meeting Berman, a mobster’s daughter who grew up in Las Vegas, when both were in graduate school at the University of California, Los Angeles in the 1960s. He said the two struck up a close, decades-long friendship.

“We both had trust funds,” Durst said.

The questioning had not yet addressed Kathie Durst’s disappearance or the details of Berman’s death when court ended for the day. Durst is set return to the stand Wednesday.

Durst, who has bladder cancer and several other ailments that he listed from the stand, wore the brown jail attire he’s had on in court for the past few weeks of the trial. His attorneys said he’s been unable to stand to put on a suit.

He struggled to hear both the clerk when he was sworn in and DeGuerin as he asked questions, using a tablet that showed a live transcription to help him understand.