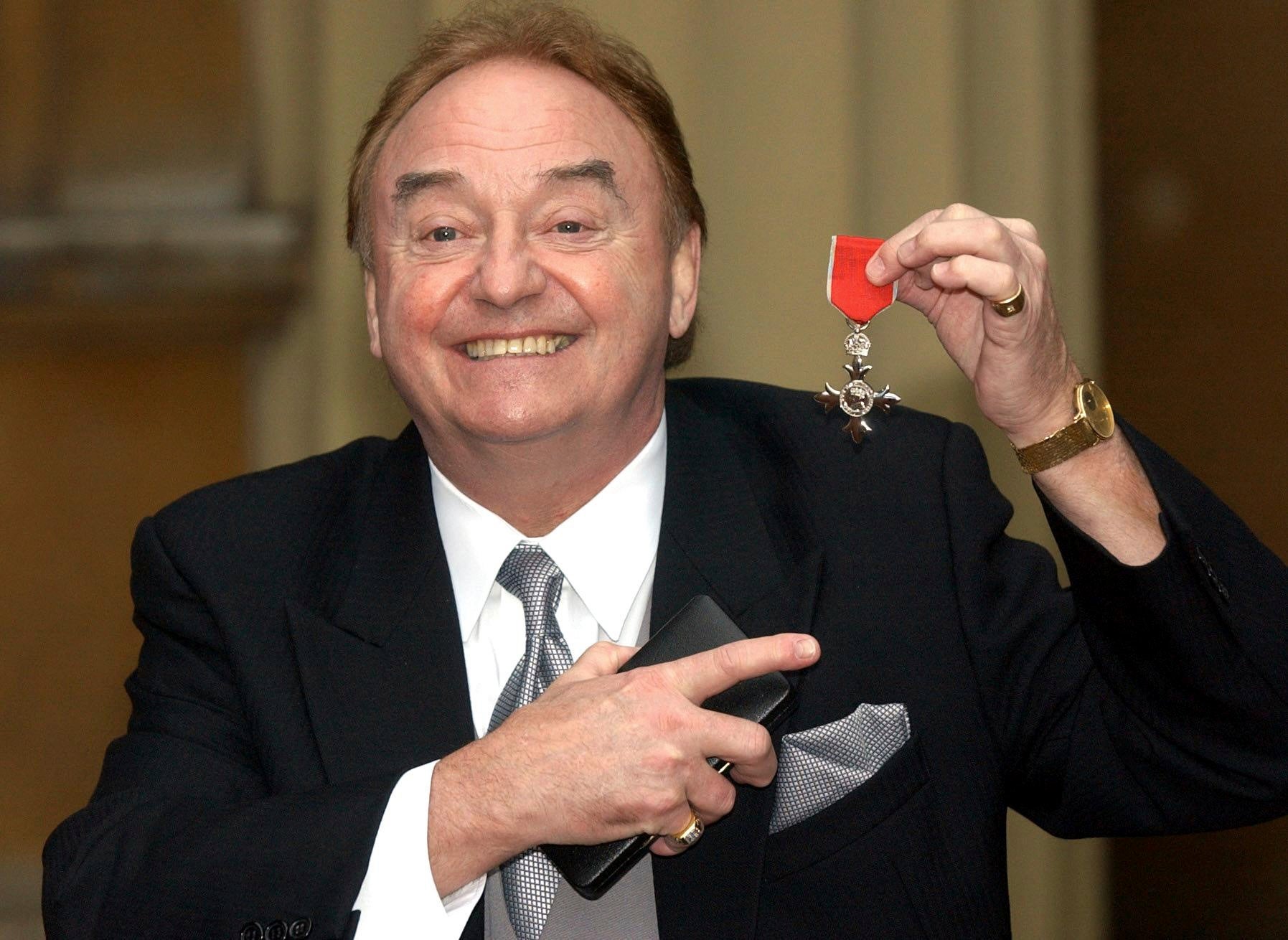 FILE - In this Dec. 12, 2003 file photo, Gerry Marsden holds his MBE. Gerry Marsden, the British singer and lead singer of Gerry and the Pacemakers, who was instrumental in turning a song from the Rodgers and Hammerstein musical “Carousel” into one of the great anthems in the world of football, has died. He was 78. (Matthew Fearn/PA via AP, File)
by: PAN PYLAS Associated Press
Posted: Jan 3, 2021 / 04:32 PM EST / Updated: Jan 3, 2021 / 04:39 PM EST

LONDON (AP) — Gerry Marsden, lead singer of the 1960s British group Gerry and the Pacemakers that had such hits as “Ferry Cross the Mersey” and the song that became the anthem of Liverpool Football Club, “You’ll Never Walk Alone,” has died. He was 78.

His family said that Marsden died Sunday “after a short illness in no way connected with COVID-19″ and that his wife, daughters and grandchildren are “devastated.”

His friend Pete Price said on Instagram after speaking to Marsden’s family that the singer died after a short illness related to a heart infection.

“I’m sending all the love in the world to (his wife) Pauline and his family,” he said. “You’ll Never Walk Alone.”

Marsden was the lead singer of the band that found fame in the Merseybeat scene in the 1960s. Though another Liverpool band — The Beatles — reached superstardom, Gerry and the Pacemakers will always have a place in the city’s consciousness because of “You’ll Never Walk Alone.”

“I thought what a beautiful song. I’m going to tell my band we’re going to play that song,” Marsden told The Associated Press in 2018 when recalling the first time he heard the song at the cinema. “So I went back and told my buddies we’re doing a ballad called ‘You’ll Never Walk Alone.’”

Marsden is best known for his band’s rendition of the song from “Carousel,” which was a 1945 Rodgers and Hammerstein musical that became a feature film in 1956. The Pacemakers’ cover version was released in October 1963 and became the band’s third No. 1 hit on the British singles chart. It was adopted by fans of the soccer club Liverpool and is sung with spine-tingling passion before each home game of the 19-time English champion — before coronavirus restrictions have meant that many matches have been played in empty stadiums.

“I was saddened by Gerry Marsden’s passing. His voice will always lead the way at Anfield, in times of celebration or lament,” singer Elvis Costello said, referring to Liverpool’s stadium.

The song’s lyrics, showcasing unity and perseverance through adversity — including “When you walk through a storm, Hold your head up high, And don’t be afraid of the dark” — have been a rallying cry for the Liverpool faithful and the song’s title are on the Liverpool club crest.

The song has also been adopted by supporters of Scotland’s Celtic and Germany’s Borussia Dortmund.

Liverpool tweeted alongside a video of the fans in full voice that Marsden’s voice “accompanied our biggest nights” and that his ”anthem bonded players, staff and fans around the world, helping create something truly special.”

The song was embraced during the outset of the coronavirus pandemic last spring when a cover of the song, which featured World War II veteran Tom Moore, reached number one. Moore had captivated the British public by walking 100 laps of his garden in England in the run-up to his 100th birthday in April to raise some 33 million pounds ($40 million) for the National Health Service.

The Cavern Club in Liverpool, the music venue which was the venue for many of The Beatles’ early gigs, described Marsden as a “legend” and a “very good friend.”

In 1962, Beatles manager Brian Epstein signed up the band and their first three releases reached No. 1 in 1963 — “How Do You Do It?” and “I Like It” as well as “You’ll Never Walk Alone.” Later hits included “Ferry Cross the Mersey,” and “Don’t Let the Sun Catch You Crying.” The group split in 1967 and Marsden pursued a solo career before reforming the bank a few years later.

Frankie Goes To Hollywood singer Holly Johnson, who is from Liverpool and covered “Ferry Across The Mersey” tweeted that Marsden was a “Liverpool legend.”

Marsden is survived by his wife Pauline, whom he married in 1965. The couple had two daughters.