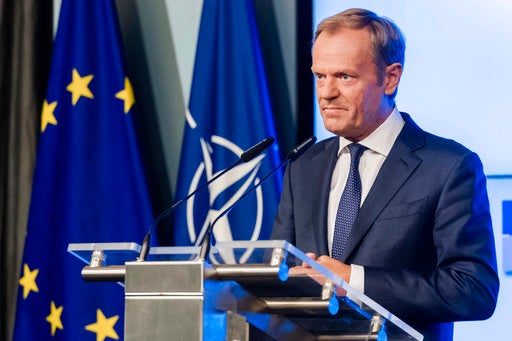 “We are all aware of the fact that the architecture of the world is changing before our very eyes and it is our common responsibility to make it a change for the better,” Tusk said. Last week, Tusk lambasted Trump’s constant criticism of European allies and urged him to remember who his friends are when he meets Putin.

In Beijing, Tusk said that Europe, China, the U.S. and Russia had a “common duty” not to destroy the global order but to improve it by reforming international trade rules.

“This is why I am calling on our Chinese hosts, but also on presidents Trump and Putin, to jointly start this process from a thorough reform of the WTO,” Tusk earlier said, referring to the World Trade Organization by its acronym. “There is still time to prevent conflict and chaos.”

Washington imposed 25 percent tariffs on $34 billion of goods in response to complaints that Beijing is hurting American companies by stealing or pressuring enterprises to hand over technology.

It has also applied tariffs on imported steel and aluminum from allies like Canada, Mexico and the European Union. The 28-country EU bloc has responded with import taxes on $3.25 billion of U.S. goods.