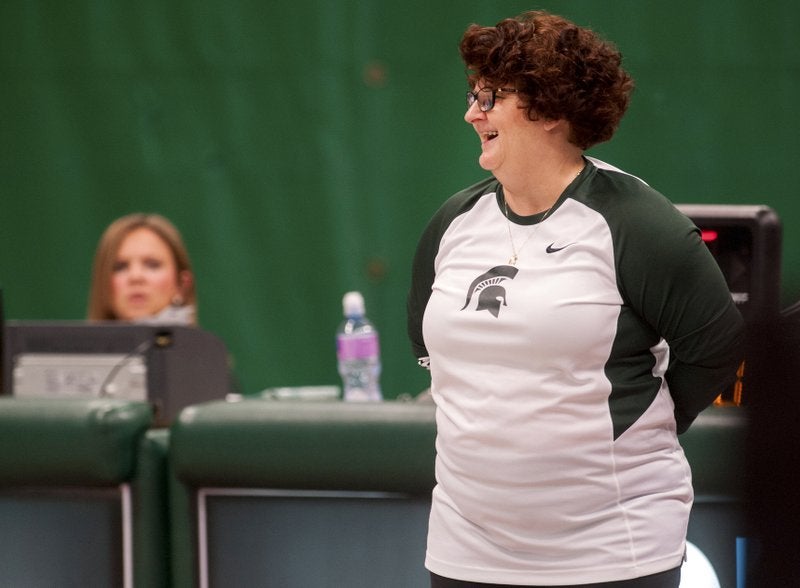 LANSING, Mich. (AP) — A former head coach of Michigan State’s gymnastics team was charged Thursday with lying to an investigator when she denied that witnesses told her years ago about being sexually assaulted by ex-sports doctor Larry Nassar.

A charging document does not specify how many witnesses allegedly reported Nassar to Kathie Ann Klages, or when they did so. But former gymnast Larissa Boyce has said she told Klages of Nassar’s abuse in 1997, when Boyce was 16 — 19 years before he was first criminally charged with sexual abuse.

Klages, who resigned in 2017 after she was suspended for defending the now-imprisoned Nassar, is now the third personother than Nassar to face criminal charges related to his serial molestation of young female athletes under the guise of treatment. Numerous other people have lost their jobs or been sued.

If convicted of lying to a peace officer, the 63-year-old Klages could face up to four years in prison.

Boyce, who declined comment Thursday, had been training with the Spartan youth gymnastics team in 1997. She has said Klages dissuaded her from taking the issue further, even after another teen gymnast relayed similar allegations.

The warrant released Thursday alleges that in June, after being informed by special agent David Dwyre that he was conducting a criminal investigation, Klages knowingly and willfully made false and misleading statements to him. She faces two counts of lying to a peace officer, one a felony and the other a high court misdemeanor.

It was unclear whether Klages had a criminal defense attorney. A message seeking comment Thursday was left with lawyers defending her against lawsuits. She lives in Mason, Michigan, just outside Lansing. Her arraignment had not been scheduled.

Michigan State spokeswoman Emily Guerrant declined to comment on the charges, saying Klages is no longer an employee.

“MSU is committed to implementing changes for the fall semester that enhance prevention and education programming and establish new safety measures as well as increase resources and support for survivors of sexual assault,” she said.

The charges were announced by special independent counsel Bill Forsyth, who was appointed by state Attorney General Bill Schuette to investigate Michigan State’s handling of Nassar. He said witnesses have said they reported Nassar’s sexual abuse to Klages dating back more than 20 years ago.

Hundreds of girls and women have said Nassar molested them when he was a physician, including while he worked at Michigan State and Indianapolis-based USA Gymnastics, which trains U.S. Olympians. Nassar, 55, last year pleaded guilty to sexually assaulting nine victims and possessing child pornography, and his sentences equate to life in prison.

Lindsey Lemke was a gymnast at Michigan State and previously has said Klages in 2016 discouraged her from speaking about how she was abused by Nassar after The Indianapolis Star exposed abuse by Nassar. She said in a statement Thursday that the charges “validate my truth and represent a huge step forward in my healing process. It is my hope that she will be held accountable for failing to protect me and other young athletes under her care.”

Other officials subsequently charged amid investigations into Nassar include the former dean of the university’s osteopathic medicine school, William Strampel, who had oversight of Nassar. He is accused of neglecting his duty to enforce examining-room restrictions imposed on Nassar after a patient accused him in 2014 of sexual contact.

Strampel — who retired this summer while the school tried to revoke his tenure — also has been charged with sexually harassing three women, including two current medical students, who alleged bawdy talk about sex and nude photos, and a groping incident.

In Texas, a grand jury indicted former sports medicine trainer Debra Van Horn on one count of second-degree sexual assault of a child. The local prosecutor said she was charged as “acting as a party” with Nassar but he did not elaborate. Van Horn had worked at USA Gymnastics for 30 years.

Investigators have said Nassar’s crimes were mostly committed in Michigan at a campus clinic, area gyms and his Lansing-area home. Accusers also said he molested them at a gymnastics-training ranch in Texas, where Nassar also faces charges, and at national and international competitions.

Michigan State softball, volleyball, and track and field athletes have said they told an assistant coach and trainers about Nassar’s inappropriate behavior. The university in May reached a $500 million settlement with 332 women and girls who said they were assaulted by Nassar.

During Nassar’s sentencings, some victims complained that Geddert was physically abusive and indifferent to injuries, and forced them to see Nassar. He has insisted that he had “zero knowledge” of Nassar’s crimes.