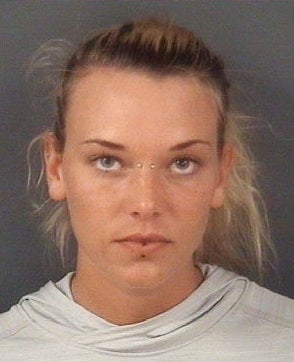 FAYETTEVILLE, N.C. (WNCN) – One of two people who were charged with shooting and killing a dog last month in Fayetteville has died, police say.

Marinna Rollins, 23, and Jarren Heng, 25, each faced a felony charge of cruelty to animals after a dog was shot five times in an incident caught on video.

Rollins, who had been stationed at Fort Bragg but ended her military service in January 2017, was found dead around 3 a.m. Sunday, Fayetteville police.

Police said that Rollins, who was charged on April 24 in the service dog’s death, was found dead at 5600 Netherfield Place.

Police are investigating Rollins’ death as a suicide.

The dog, named “Cumboui,” was shot with a rifle, court documents say.

Rollins’ estranged husband, Matt Dyer, a Fort Bragg soldier, adopted the dog, then named “Huey,” before being deployed to Korea for a year.

Dyer says that, although he and Rollins were separated, she agreed to care for Huey during his deployment.

Dyer said that during his deployment, Rollins got Huey certified as an emotional support dog.

Rollins then changed the dog’s name to “Camboui.”

Deputies also said there is video evidence in the dog shooting case the DA’s office said it will use.

A close friend of Rollins’ uploaded video of the shooting to Facebook, saying they hoped it would get attention leading to punishment.

“It’s been real, Cammy, I love you. You’re my puppy. You’re a good puppy,” a woman is heard on the video saying.

In the last video clip, the woman goes over to her now-dead dog, picks him up, shoves him over, says “I love you, you’re a good dog” and then covers him with some kind of sheet.

Rollins was due back in court with Heng later this month. A protest is planned at the court house.