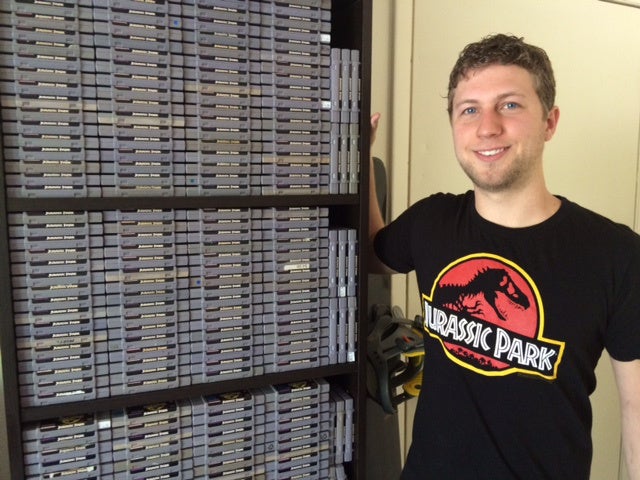 FORT WAYNE, Ind. (WANE) — When a video game store went out of business, a Fort Wayne man decided why not buy more than 100 copies of the same Jurassic Park Nintendo video game. After spending years collecting, Kevin Hershberger decided to sell his collection and posted a photo on eBay, showing more than 300 Super Nintendo cartridges of Jurassic Park in his refrigerator. That’s right. The same working refrigerator people usually use to keep their yogurt fresh.

“I didn’t always keep them in the refrigerator, a lot of times they sat on a shelf. Sometimes they sat in a box,” he said standing next to a shelf filled in every nook and cranny with the cartridges.

In 2012, McVans Video Games closed its doors. Hershberger had the opportunity to buy a large amount of games for what he said was a “pretty reasonable price.”

“They just happened to have about 100-120 copies of Jurassic Park for the Super Nintendo in their basement. So I had the opportunity and I thought what they heck, why not, this could be fun. So, I went with it, and it took off from there,” Hershberger said.

At that time, he was involved in an online gaming forum where he shared his new found collection.

“People loved it. So I decided I would go for 500. Then people convinced me to go for 1,000, which was-ridiculous. There was no way I had the funds to go for quite that much,” he chuckled.

Hershberger didn’t reach his 500 copies goal, but in the end, his collection of more than 300 Jurassic Park video games got a lot of attention, to the point where some people were just donating them.

There are some cartridges still in the box, some Sega Genesis, Sega CD and Saturn copies of the game, along with a version for Game Boy. There are also a few copies of the Jurassic Park 2 game. Finally, in addition to all of those games, there is one laser copy of the movie.

So in May, he decided to sell, and a person bid $1,500 in an online auction, which amounts to about $5 per cartridge.

Hershberger was happy with the offer saying, “This isn’t the kind of a collection you can just build in a week.” Not many people attempt to collect the same cartridge for one game, he added. The recent college graduate plans on using the money to paying off his student loans.

“Some of it was maybe to pass the torch. A portion of it was also because I could use the money for a jump start on the future,” he said.

Hershberger said he was motivated to continue collecting because it was something different. At one point, he even took a picture of the video games in his bathtub.

“I’ve helped fund my expenses through college by buying and selling old games and collecting more on the side. It was fun. It was something different. I’ll still collect, just not Jurassic Park and not in bulk,” he commented at the end of the interview.