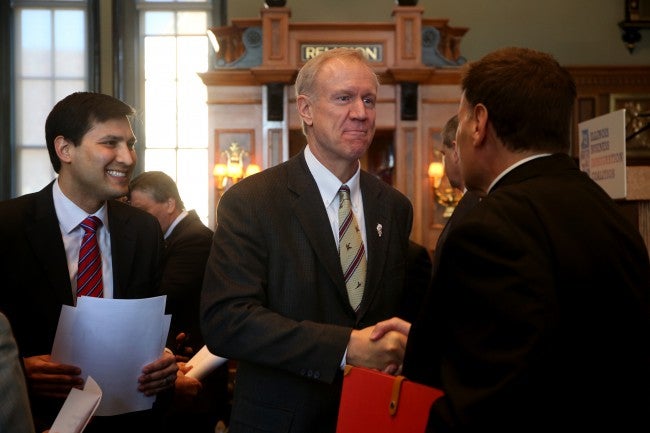 He told the Chicago Tribune Editorial Board Monday: “Believe me, I am going to rip – try to rip the economic guts out of Indiana.”

He went on to say, “We’re coming after Indiana big time.”

Kara Brooks, a spokeswoman for Indiana Gov. Mike Pence, says Indiana will put up its low corporate taxes, triple A credit rating and business climate against those of any other state. She says, “Illinois will find tough competition here in Indiana.”

We took those statements to the Indiana Chamber of Commerce and the CEO told us, bring it on.

“In recent years Illinois has been an easy target because of their financial crisis,” said CEO Kevin Brinegan.

But now, the hunted is becoming the hunter.

Illinois Governor Bruce Rauner has his sights set on Indiana, specifically the businesses that call the state home.

“I think whenever you are a top 10 business climate state, you’re always likely to have the other 40 states nipping at your heels,” said Brinegar.

But according to recent surveys, Illinois isn’t even close enough to reach Indiana’s heels when it comes to having a quality business climate.

Economic expert Dr. Ron Pollina put together a list of the most Pro-Business States. Illinois ranked 49th while Indiana landed in the top 10 again, at 7th. Both surveys focused on factors like creating and retaining jobs, tax rates, and quality of living.

“Maybe the Governor needs to focus on state number 47 or number 46 before he tries to jump all the way up and take on the 6th best business climate in the country,” he said.

Brinegar doesn’t hold Governor Rauner’s stance against him. He even acknowledged how Indiana tries poaching businesses as well.

The two states’ rivalry dates to 2011, when state and local officials in northwest Indiana ran an advertising campaign to lure Illinois businesses after that state raised its corporate tax rate from 4.8 percent to 7 percent.

“Illinois’ has a long way to go to get to where their business climate is viewed and ranked as high as Indiana’s so we would say bring on the competition,” he said.

Brinegar did say he thinks it’s good that governor Rauner is taking this stance. He said it should send a message to Illinois lawmakers to get their financial situation fixed.

He feels Governor Rauner’s comments aren’t totally directed at Indiana businesses, but at lawmakers in his own state.

“He’s trying to rally to people of Illinois to put pressure on the legislature to roll up their sleeves and tackle these big challenges and big problems that Illinois has that Indiana doesn’t have so that they can even begin to think about competing with our state on an economic scale,” said Brinegar.

Over the last couple weeks, major companies like Anthem and Angie’s List threatened to possibly leave Indiana due to the Religious Freedom Restoration Act.

They were worried the bill opened the door for businesses to discriminate against people based on their sexuality. But Governor Mike Pence signed a bill last week that adds protection against that type of discrimination.

The two states’ rivalry dates to 2011, when state and local officials in northwest Indiana ran an advertising campaign to lure Illinois businesses after that state raised its corporate tax rate from 4.8 percent to 7 percent.