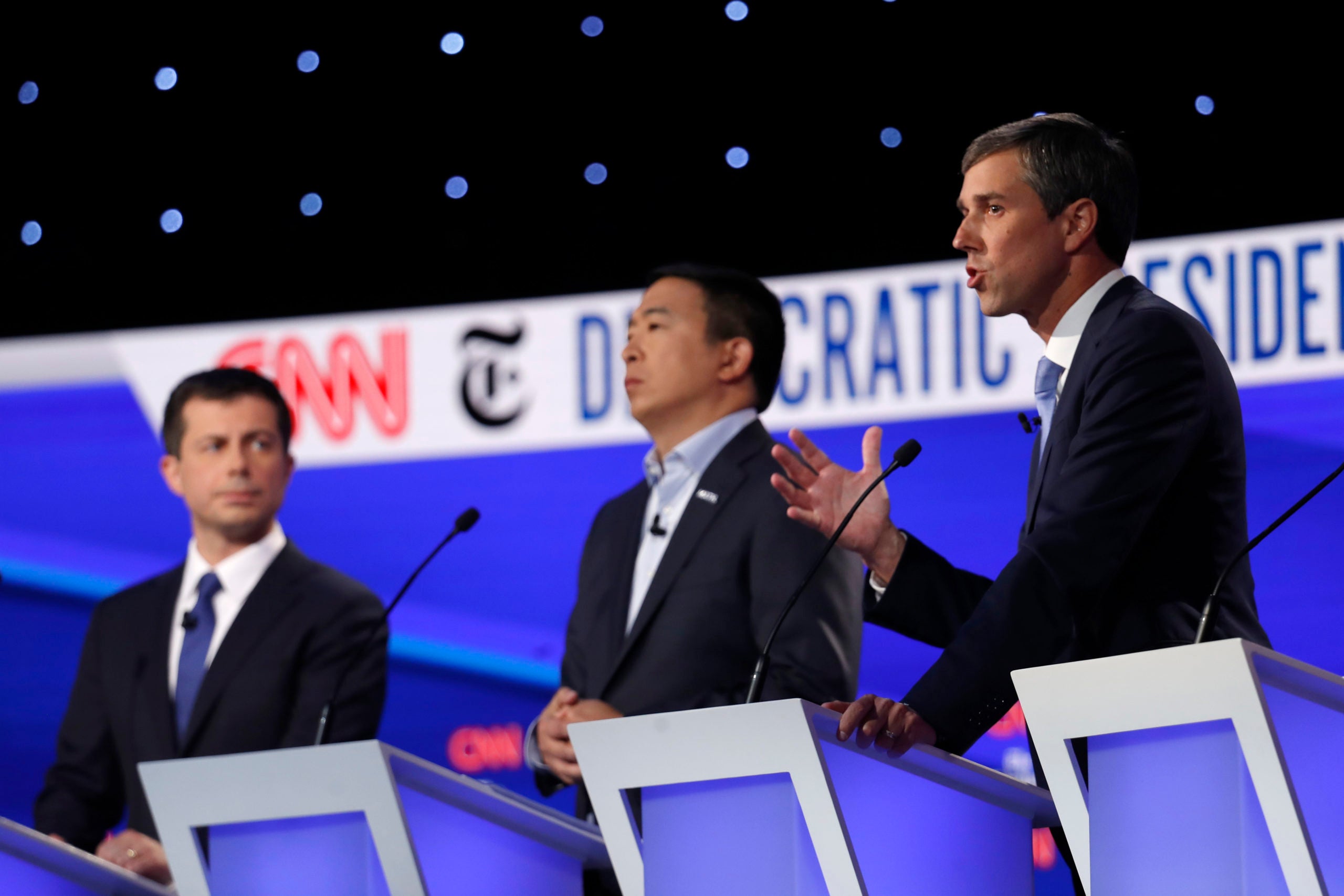 Here’s a look at how some of their claims from Westerville, Ohio, stack up with the facts:

PETE BUTTIGIEG: “We are at the cusp of building a new American majority to actually do things that congressmen and senators have been talking about for my entire life — on guns, we are this close to an assault weapons ban, that would be huge.”

THE FACTS: No, the U.S. is not close to enacting an assault-weapons ban. Congress is not on the verge of passing one. Prospects for such a ban are bound to remain slim until the next election at least.

Legislation under discussion in the Senate would expand background checks for gun sales, a politically popular idea even with gun owners. But even that bill has stalled because of opposition from the National Rifle Association and on-again, off-again support from Trump. Democrats and some Republicans in Congress say they will continue to push for the background checks bill, but movement appears unlikely during an impeachment inquiry and general dysfunction in Congress. And Senate Majority Leader Mitch McConnell has made it clear he won’t move forward on gun legislation without Trump’s strong support.

Buttigieg, the mayor of South Bend, Indiana, was citing the chance for an assault-weapons ban as a reason for not supporting the more radical proposal by Democratic presidential rival Beto O’Rourke to force gun owners to give up AR-15’s and other assault-style weapons. But the ban is not coming together as he stated.

KAMALA HARRIS: “Five million assault weapons are on the streets of America today.”

THE FACTS: The California senator’s statistic on the number of AR- and AK-style firearms is not accurate. Even the gun industry estimates there are now 16 million “assault weapons” in circulation in the United States today. In 1994, President Bill Clinton enacted an assault weapons ban, at a time when there were an estimated 1.5 million of them in circulation. Current owners were allowed to keep them, however, and once the ban expired a decade later, sales resumed and boomed.

THE FACTS: Economists mostly blame those job losses on automation and robots, not trade deals.

So the Massachusetts senator is off.

Let’s start by acknowledging that the U.S. economy has been adding jobs, just that the nature of those jobs has changed as factory work and other occupations have become less prevalent.

Trade with China has contributed to shuttered factories and the loss of roughly 2 million jobs, according to research published in 2014.

But the primary culprit that accounted for 88% of factory job losses between 2000 and 2010 was automation, according to researchers at Ball State University.

There is also a bigger threat from automation for workers outside factories. These are secretaries, bookkeepers and a wide array of professions. Automation can displace these workers and put downward pressure on their wages, forcing them to find other jobs.

WARREN: Buttigieg’s Medicare buy-in option is “Medicare for all who can afford it.”

THE FACTS: Warren ignored the fact that Buttigieg would provide subsidies to help people pay premiums for the plan.

She was jabbing at Buttigieg’s proposal to create an optional health insurance plan based on Medicare. Individual Americans could join it, even those covered by employer plans.

Buttigieg calls it “Medicare for all who want it.”

Details are unclear on who would get financial assistance, and how much that would be. But Buttigieg and Biden have said they want to provide help to a broader cross section of Americans than are currently helped by the Affordable Care Act.

Figures from the Labor Department show that the former Housing and Urban Development secretary is wrong.

Ohio added jobs in August. So did Michigan . Same with Pennsylvania .

So Castro’s statement is off.

However, these states still have economic struggles. Pennsylvania has lost factory jobs since the end of 2018. So has Michigan . And Ohio has shed 100 factory jobs so far this year.

WARREN: “Mueller had shown to a fare-thee-well that this president obstructed justice.”

It’s true that prosecutors examined more than 10 episodes for evidence of obstruction of justice, and that they did illustrate efforts by President Donald Trump to stymie the Russia investigation or take control of it.

But ultimately, Mueller did not reach a conclusion as to whether the president obstructed justice or broke any other law. He cited Justice Department policy against the indictment of a sitting president, and said that since he could not bring charges against Trump, it was unfair to accuse him of a crime. There was no definitive finding that he obstructed justice.