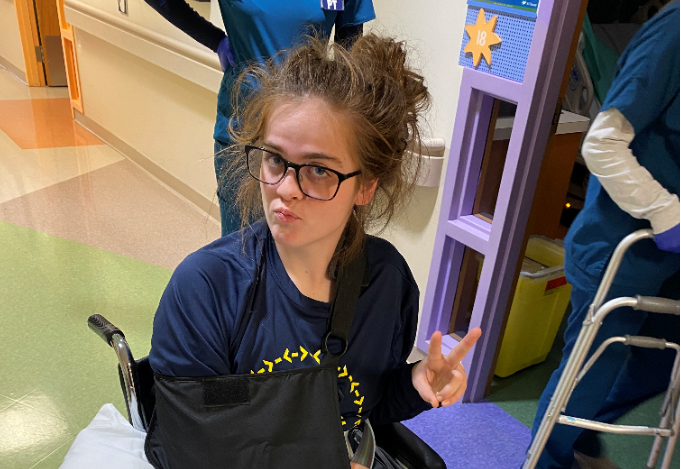 HAGERSTOWN, Ind. (WISH) — A east central Indiana community is rallying around a high school athlete who is recovering from a stroke.

On Nov. 30, Baylee Foor became light headed at basketball practice. Trainers had her sit out and hydrate. They cleared her to go home after practice.

The 18-year-old got home and played with her siblings. Her stepmother, Samanatha, left to run errands and noticed the shower was running when she got home. She went to check on Baylee and saw she was on the floor and called 911.

The teenager wasn’t comprehending anything and the left side of her face was sagging.

Doctors said Baylee may have had a blood clot but will never really know how the stroke happened.

Her father and stepmother are beyond grateful for the spirit of giving from strangers, especially around Christmas.

“Our hope in humanity has been completely restored,” Baylee’s dad Colte Foor said. “Especially with the fact that people don’t even know us just have heard the story because they say somebody comment or share or whatever. I am getting messages everyday and my wife gets calls and texts and, you know, it’s just mind boggling.”

“It will figure itself out,” Baylee’s stepmother Samantha Foor said. “I am not going to worry about the financial part of it. We will do what we have to do to make ends meat. We just want Baylee back home.”

As of now, the 18-year-old can’t use her right side or speak. She’s on her way to rehab. Doctors expect her to get 80% to 90% of feeling back in her right side.

More than $6,000 has been given to the Foor family from surrounding towns. Some of it was raised at local high school girl’s basketball games because Baylee Foor is a player. The rest was raised through a GoFundMe page.