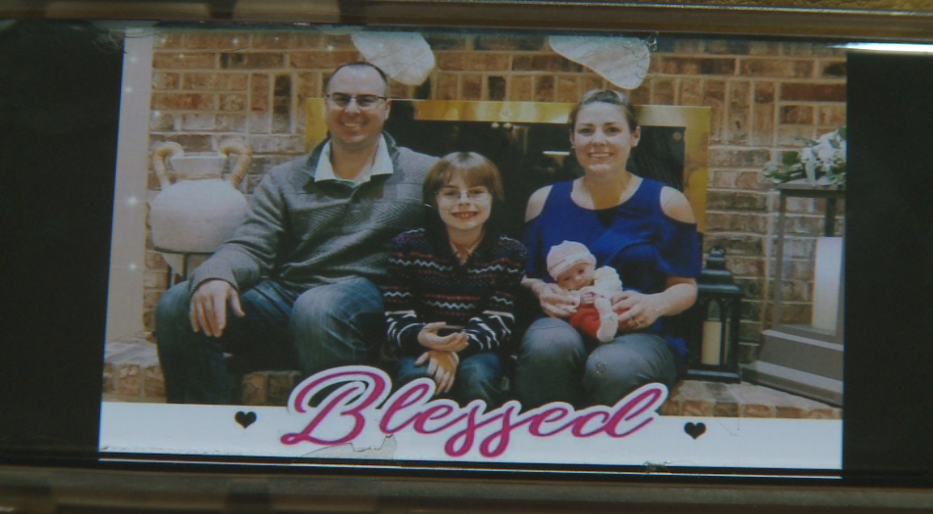 INDIANAPOLIS (WISH) — John McAfee, his wife Rachel and their two young children were set to pose for new family photos in May.

Rachel McAfee, 36, was arrested Wednesday on a preliminary charge of neglect of a dependent causing death, authorities said.

The couple’s youngest child and only daughter, 3-month-old Emma, was found dead Tuesday afternoon in Rachel’s SUV after they were reported missing Monday.

During an interview with News 8 — mere hours before detectives made the tragic discovery in the 2600 block of Stanford Court — John revealed his wife had been battling alcoholism and depression.

A recent family photo — saved on John’s iPhone with “Blessed” written underneath the image in pink cursive — captured no signs of Rachel’s pain. She sits beside her son and husband in front of their fireplace, with Christmas stockings hanging overhead and newborn Emma, doll-like, on her lap. Her smile is radiant.

“It’s up and down,” John told News 8.”When she’s sober, she’ll listen and have discussions. When she’s drinking, she just completely throws everything out the window and starts over back at scratch.”

“We generally recognize that women suffering from perinatal mood disorders may be at increased risk for substance abuse,” said Dr. Travis Richardson, an obstetrician-gynecologist at IU Health. “Those two may be commonly be seen together and the treatment may go hand-in-hand.”

Symptoms of postpartum depression range from mood and behavioral issues to somatic changes affecting the whole body, he told News 8, and can lead to child neglect or difficulty bonding with an infant.

Women may experience some or all of these signs:

New mothers should seek help for symptoms that continue for more than two weeks after delivery, according to experts.

“The most important thing is to realize this is not a weakness in an individual or a downfall of their own making (because) this definitely has a basis in physiology,” explained Richardson. “If a woman has thoughts of self-harm or causing harm to the baby, then that should be considered an emergency and be taken seriously.”

Rachel McAfee had verbally threatened to hurt herself in the past, her husband told News 8.

It remained unclear Wednesday if she had expressed any desire to harm herself or Emma immediately before their disappearance.

Toxicology reports and the infant’s autopsy results were not yet available Wednesday night.

Rachel remained hospitalized Wednesday for treatment of cold-related injuries, authorities confirmed, and will be transferred to police custody and formally charged with a felony upon release from Sidney & Lois Eskenazi Hospital.

Instead of sitting for family photos, Rachel McAfee will stand for a mugshot.