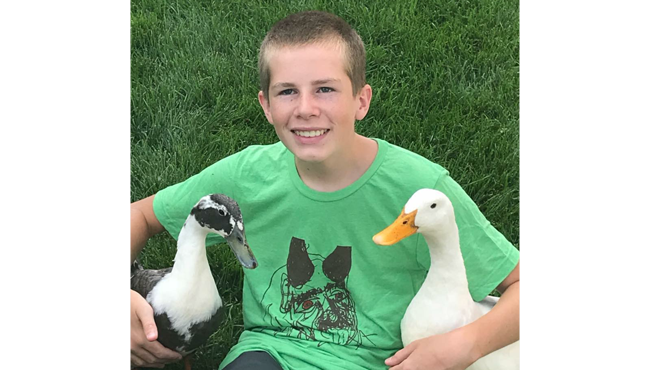 GEORGETOWN TOWNSHIP, Mich. (WOOD) — Parents of a 12-year-old boy with autism are fighting the township where they live after being ordered to get rid of their son’s ducks despite letters from his doctor designating the birds as emotional support animals.

Through the Freedom of Information Act, WISH-TV’s sister station WOOD obtained two of the complaints. The township says it has received several.

“The ducks are free to roam around when their autistic child is present, but often stray from the property and defecate on others (sic) lawns, beaches and patios,” one complaint read in part.

“The sight and smell is offensive and embarrassing… It could affect our home values as well,” another complaint slated.

Township officials say they’re enforcing an ordinance that prohibits homeowners in the area where the Dykes lives from having farm animals on their property. The Dykes have now submitted a request for an ordinance variance and are hoping the township’s zoning appeals board will rule in their favor in 7:30 p.m. meeting at Georgetown Township hall on August 22.

“These ducks are his everything,” Jen Dyke said. “They’re his whole life.”

The ducks are kept in a pen directly behind the family’s home which is situated on the shores of a small lake. Jen said her son feeds the birds daily at 7 a.m. sharp. After school, she says Dylan immediately runs to check on the ducks.

Dr. Eric Dykstra is Dylan’s psychologist and the clinical director for Developmental Enhancement, PLC. He said the birds have been an important part of Dylan’s treatment.

If the ducks are taken from Dylan, Dykstra said he would be concerned.

“I believe it would cause significant emotional distress for him,” he said.

Dylan, one of five children, was excited to talk about his ducks with a WOOD crew outside of his home. Their names are Bill and Nibbles.

“I can tell them anything and they just won’t be bothered by it,” Dylan said as the ducks quacked while sitting next to him. “These ducks understand me so much. My siblings do as well, but these ducks just trust me more.”

Dylan is aware of the controversy and the possibility that he could lose his ducks.

“It just wouldn’t be the same,” he said. “I know we’re going to win since I love these ducks so much and I know that a lot of people online love ducks as well.”

Dylan was referencing the support he has received online. As of Tuesday evening, more than 700 people “liked” his Facebook page entitled “Dylan’s Duck Adventures.”

The Dyke’s have shared their story online and some of their supporters put together a benefit concert to help the family pay for legal fees incurred while dealing with the situation.

The family is hopeful their supporters will address the zoning appeals board at the Aug. 22 meeting. If the ruling doesn’t go in their favor, the Dyke’s say they’ll take the matter to court.

“We live here,” said Mark Dyke, Dylan’s father. “We want to get along with everybody as much as we can but at the same time we need to advocate for our special needs son.”

The Dyke family lives on Van Buren Street in Georgetown Township and is part of the Cory Estates Association, a homeowners association. One of the complaints filed with the township came from a member of the association’s board.

Through its attorney, the board issued the following statement on the matter:

“The Board of Directors for the Cory Estates Association is aware of the request to house outdoor fowl in a close neighborhood setting. We understand that this would require a variance from all applicable Georgetown Township ordinances as well as a waiver of applicable provisions of the Cory Estates Association Restrictive Covenants.  While weighing the interests of all neighbors in our neighborhood, we have attempted to facilitate a manageable resolution, and remain committed to an outcome that balances clear and stable expectations for all neighbors, the consideration of specific family requests, the mitigation of negative impacts on others, and a predictable path for any similar future requests.  We look forward to engaging all neighbors in this process.

Sincerely, The Board of Directors of the Cory Estates Association”

All Indiana / 7 seconds ago