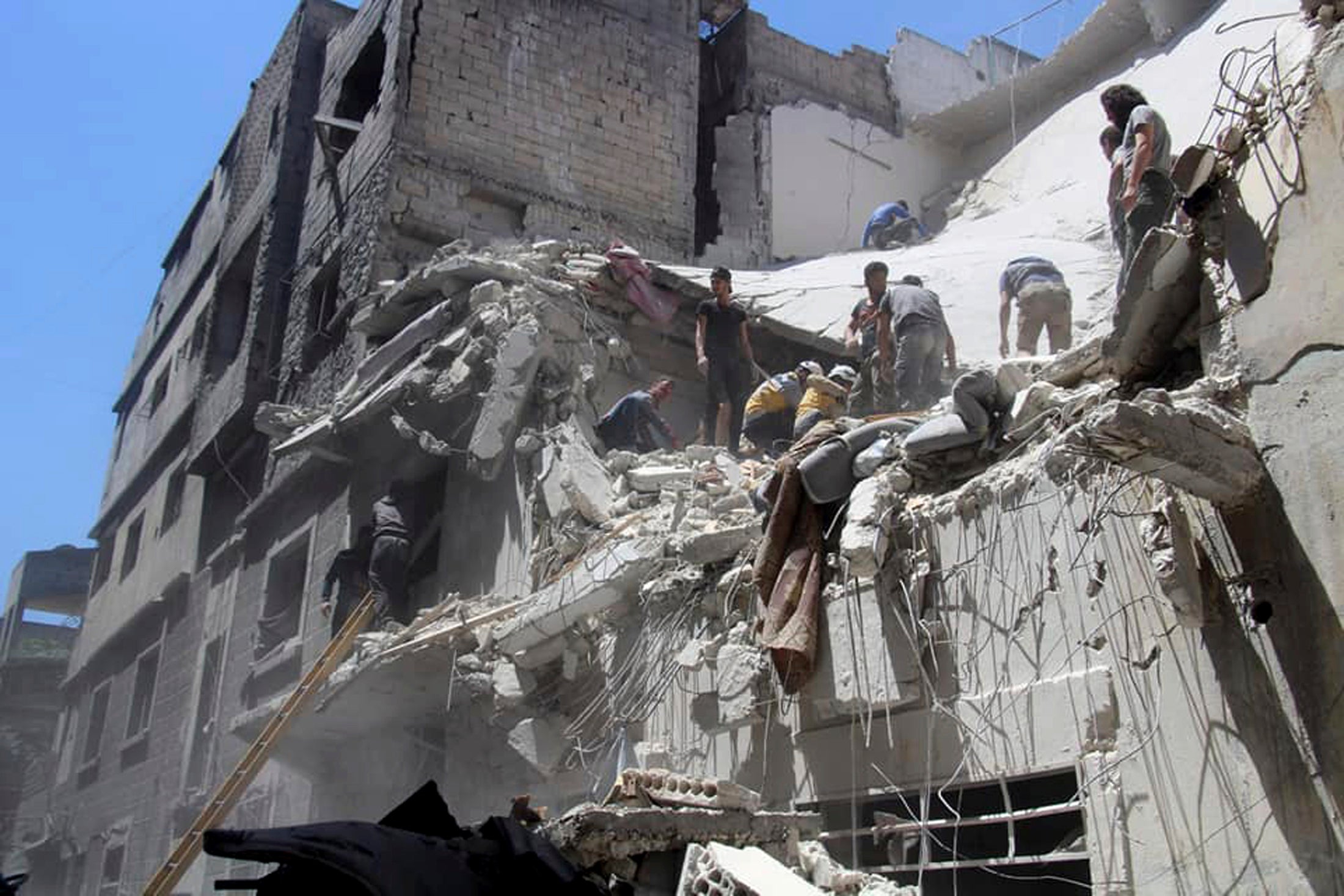 The first responders known as White Helmets said 11 people were killed, including six children and four women. Rescue workers were still searching for survivors under the rubble after the airstrikes hit in the town of Ariha. One rescuer said after two hours of searching two children were pulled out alive.

Videos from the scene by the White Helmets showed a narrow alley blocked by the debris from a pulverized building. Survivors covered in white dust were among those who lifted a wounded man on a gurney and a young girl into the ambulance.

The Syrian Observatory for Human Rights reported 17 were killed on Monday, including nine in Ariha and six others in another village, Hazareen.

The scene in Ariha was reminiscent of the violence that has hit many rebel-held areas as the government pursued similar military tactics to regain control of territory it had lost to armed opposition. In the last three years, Syrian troops, with support from Russia and Iran, have regained control of most of the country, displacing hundreds of thousands, mostly to Hama and Idlib, where rebels are making their last stand.

But this rebel stronghold is home to nearly 3 million people, who have nowhere to run to escape the government offensive.

Ghayath, a resident of Ariha, said the bombs fell on two buildings only meters away from a main market which was packed with shoppers at the time of the strike.

He had passed through the narrow street on his way home minutes before the strike. He returned more than half an hour later to inspect what happened as rescuers looked for survivors. It was “too painful” to watch, so he left, he said.

“We can hear the bomb as it heads toward the ground, and it is terrifying,” Ghayath said. He spoke on condition only his first name is used, fearing he would be traced by government forces and his house targeted.

A cease-fire in place since September in the province of Idlib, negotiated by Russia and Turkey, has all but collapsed.

U.N. agencies say more than 200,000 are displaced within the stronghold, moving from the southern tip up north and crowding already packed camps and towns. Most of those displaced are living outside of camps, the U.N said, while some have sought safety near the Turkish border where they hope no airstrikes would pursue them there.

Some 20 health facilities, three displaced people’s camp and one refugee camp were hit in the violence, the U.N. Office for the Coordination of Humanitarian Affairs reported on Friday.

On Monday alone, the Observatory said there were more than 100 air raids and as many as 93 barrel bombs dropped on the southern section of the rebel stronghold.

Russia and the government announced last week the opening of two corridors for civilians to exit the rebel-held enclave— another familiar tactic followed to empty opposition areas amid a military operation.

The U.N. said it was not party to discussions for such a corridor and said movement of civilians must be a choice, not forced by violence.

The majority of the civilians living in the last rebel stronghold have either been evacuated from other opposition-held areas that were reclaimed by the Syrian military or are hard-core anti-government critics who refused to return to government control.

Most of the enclave is administered by the al-Qaida-linked group, Hayat Tahrir al-Sham, which has collaborated with other armed opposition groups to fight government advances.

Turkey says Syrian government forces are aiming to expand their control in the area despite the cease-fire deal. Damascus says Turkey has failed to reign in the militants in control of Idlib and allow for it to access two major highways that run through the enclave, according to the deal.