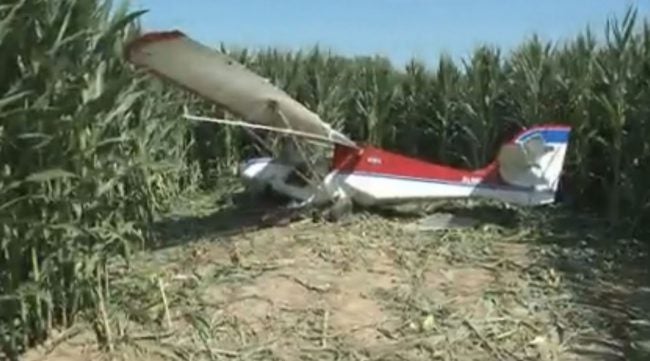 WELLS COUNTY, Ind. (WANE) – A father and daughter were hospitalized after a small plane they were in crashed in a cornfield three miles southwest of Bluffton late Tuesday.

The crash was reported around 9 p.m. Tuesday.

According to a Wells County Sheriff’s Department crash report, Matthew Christman of Markle called 911 and said he’d crashed his plane in a cornfield just before the runway at Miller Airport, and his passenger – his daughter, Kassie – was hurt. Police and medics responded to the cornfield at a property in the 1700 block of West 200 South in Bluffton.

There, crews found a downed red-and-white single engine plane. Kassie was found beneath the right side wing, the report said.

Christman told investigators he was trying to land at Miller Airport when the aircraft’s engine failed and the plane fell from the sky, the report said. He said his daughter was ejected as the plane skidded through the cornfield.

The plane came to a rest just shy of the airport. Miller Airport is a private facility with two runways. According to online navigation information, the two runways are turf and measure 2,600 feet by 100 feet.

Aerial images of the airport show several hangers and online records indicate at least nine airplanes are housed at the airport.

The closest weather observation – at Fort Wayne International Airport – listed a visibility of ten miles with a few clouds and calm winds during the reported time of the crash.

The plane, an amateur-built, propeller-powered Avid Flyer, was registered to Thomas Zuber of Phenix City, Alabama, according to Federal Aviation Administration records. It sustained major damage to its front, cabin area, propeller, fuselage, tail and landing gear in the crash, the report said.

FAA investigators were expected to arrive at the scene early Wednesday to take over the investigation.