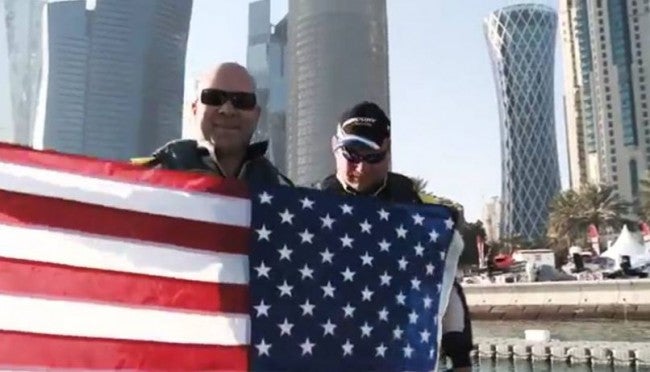 INDIANAPOLIS (WISH) – In Indianapolis racing has always been a family affair. It’s something you mostly hear about at the Indianapolis Motor Speedway. However, an Indianapolis father-son racing duo are making some waves.

George and Mike Stancombe of Peppers Racing are living in the fast lane, in off shore power boat racing. The Stancombe’s have no problem competing in boat races with speeds up to 130 mph side by side with another boat, so why do they do it?

“There’s nothing like it. The feeling of 130 mph on the water it’s just amazing!” said Mike Stancombe.

His father also said the thrill keeps him aboard.

“It’s an addiction, it’s a serious addiction. You would like to quit but you can’t because the thrill just keeps going and going. And you want some more.” said George Stancombe.

George and Mike have been racing together for 20 years and they’ve had their share of victories. They are two time world champions, four time national champs and recently they were invited overseas to compete in Qatar where they finished an amazing fourth.

Both drivers admit the pressure is always high.

“If you mess up you could drown, you could die. There’s no bouncing off a wall. It’s water.” said Mike Stancombe.

Mike came close to losing his father while competing in a race in 1998.

“The boat went airborne landed upside down busted the canapé open and tore my airlines off my air mask. I was actually hanging in that thing upside down under water thinking I must be dead because I was breathing water in and out of my lungs, and I thought this can’t be happening” said George Stancombe.

It’s that moment that makes Mike appreciate being in the boat with his father even more.

“We get along so well inside this boat that we don’t even talk. We know exactly what each other is going to do a lot of Indy Car guys will say that about their crew chief but my guy is sitting right next to me. It’s awesome” said Mike Stancombe.