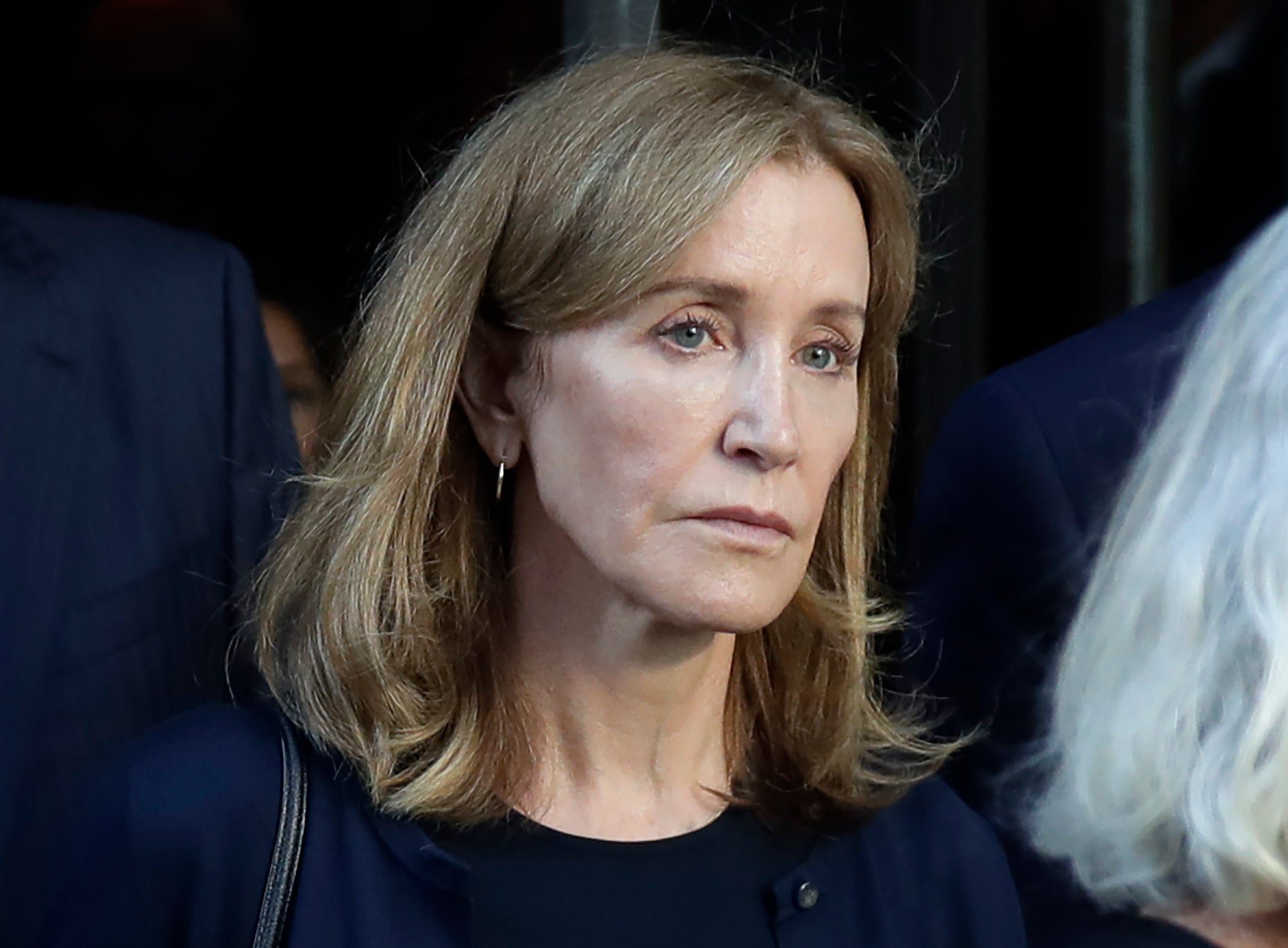 FILE - This Sept. 13, 2019 file photo shows actress Felicity Huffman leaving federal court after her sentencing in a nationwide college admissions bribery scandal in Boston. A representative for Huffman says she reported to a federal prison in California to serve a two-week sentence on Tuesday, Oct. 15. Last month a federal judge in Boston sentenced Huffman to 14 days in prison, a $30,000 fine, 250 hours of community service and a year's probation after she pleaded guilty to fraud conspiracy for paying an admissions consultant $15,000 to have a proctor correct her daughter's SAT answers. (AP Photo/Elise Amendola, File)
by:
Posted: Oct 15, 2019 / 03:13 PM EST / Updated: Oct 15, 2019 / 05:35 PM EST

SAN FRANCISCO (AP) — “Desperate Housewives” star Felicity Huffman — aka prisoner No. 77806-112 — reported Tuesday to a federal prison in California to serve a two-week sentence in a college admissions scandal that ensnared dozens of wealthy mothers and fathers trying to get their children into elite schools.

Huffman’s husband, actor William H. Macy, dropped her off at the Federal Correctional Institution, Dublin, a low-security prison for women in the San Francisco Bay Area, according to TASC Group, which represents Huffman.

The prison has been described by media as “Club Fed,” making its way onto a Forbes list in 2009 of America’s 10 Cushiest Prisons.

Like all inmates, Huffman would be issued a prison uniform and underwear and referred to by her number once inside the prison, where she will share a room and open toilet with three other inmates, according to a TASC Group publicist who declined to be named in accordance with company policy.

Huffman, 56, “is prepared to serve the term of imprisonment Judge (Indira) Talwani ordered as one part of the punishment she imposed for Ms. Huffman’s actions,” the TASC Group said in a statement that provided no further details.

Officials at the prison did not immediately return two phone calls seeking comment.

A federal judge in Boston sentenced Huffman last month to 14 days in prison, a $30,000 fine, 250 hours of community service and a year’s probation after she pleaded guilty to fraud and conspiracy for paying an admissions consultant $15,000 to have a proctor correct her daughter’s SAT answers.

Huffman tearfully apologized at her sentencing, saying, “I was frightened. I was stupid, and I was so wrong.”

Huffman was the first parent sentenced in the scandal that exposed the lengths some parents will go to to get their children into elite schools and reinforced suspicions that the college admissions process is slanted toward the rich.

The judge noted that Huffman took steps “to get one more advantage” for her daughter in a system “already so distorted by money and privilege.”

The facility where Huffman will serve her time has housed well-known inmates in the past, including “Hollywood Madam” Heidi Fleiss.

Huffman will likely be assigned work duty, and prisoners at the Dublin institution are subjected to five bed counts a day. They have access to a gym, a library and a TV room, the TASC spokesman said.

He said Huffman intends to read, walk in the courtyard and exercise as much as she can.

Huffman was one of 51 people charged in the scandal. She paid $15,000 to boost her older daughter’s SAT scores with the help of William “Rick” Singer, an admission consultant at the center of the scheme. Singer, who has pleaded guilty, was accused of bribing a test proctor to correct the teenager’s answer.

The amount Huffman paid is relatively low compared with other alleged bribes in the scheme. Some parents were accused of paying up to $500,000.

The scandal was the biggest college admissions case ever prosecuted by the Justice Department.

Prosecutors said parents schemed to manipulate test scores and bribed coaches to get their children into schools by having them labeled as recruited athletes for sports they didn’t play.