Fever fall to Mercury in WNBA playoffs; Catchings’ career comes to an end 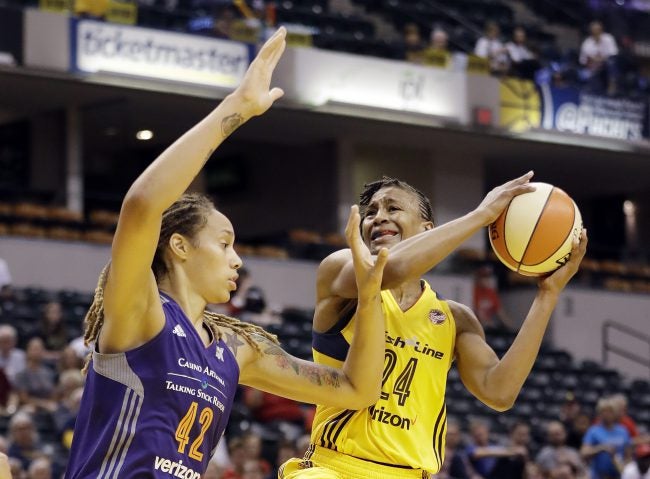 INDIANAPOLIS (AP) – Diana Taurasi scored 20 points, DeWanna Bonner had 11 of her 18 points in the fourth quarter and the Phoenix Mercury beat the Indiana Fever 89-78 on Wednesday night in a single-elimination game of the WNBA playoffs.

Tamika Catchings, who played in her final game, and the entire Indiana team knelt with their arms intertwined during the national anthem. Two members of the Mercury, Kelsey Bone and Mistie Bass, also took a knee.

“This game of basketball is important for a lot of reasons. One of them is bringing people together. Even uniting people,” Catchings said about the “impromptu” kneeling during the national anthem. “Well, we thought it was important to have a voice about something greater than basketball.”

WNBA President Lisa Borders, who was in Atlanta for the playoff game between the Dream and Seattle backed the players choice to kneel.

“I support our players expressing their views on important social issues,” Borders said in a statement. “Standing for an anthem is a sign of respect and a demonstration of unity across many cultures throughout the world. The call to action is for all of us to invest time and resources to help rebuild and strengthen our communities. And we have been actively working with the players on this next impactful effort.”

Briann January made a reverse layup with 2:39 remaining to pull Indiana to 77-72 and she drew an offensive foul on Taurasi on the other end. Erlana Larkins had a putback on Indiana’s next possession to cap a 10-1 run to make it 77-74.

Brittney Griner added 18 points, nine rebounds and three blocks for Phoenix, which will play at New York on Saturday. Bonner was just 2 of 5 from the floor in the first half.

“When I got in the second half, I told myself I was going to be aggressive,” Bonner said. “Because I felt like I was a little tentative and a little scared in the first half.”

Catchings left the floor at the final buzzer to a standing ovation from the crowd and she hugged every Indiana teammate, including a long embrace with January. Then she hugged each player on the Phoenix team.

Before the game, Catchings received the 2016 Kim Perrot Sportsmanship Award prior to the opening tip. She is the first three-time winner since the award’s inception in 1997.