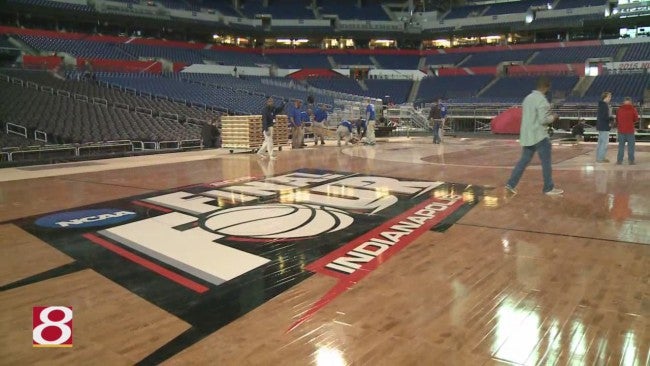 INDIANAPOLIS (WISH) — The Final Four is still a week away but the tournament’s stage has already been set.

“There’s an excitement, there’s an energy around this floor. I mean, it’s finally here. We’ve been planning for well over a year and now the floor is here and it’s like a new car smell,” said Andrew Campbell of Connor Sports, the builders of the court floor.

That smell is coming from the fourteen tons of cured maple wood that will make up the floor.

400 pallets of wooden panels arrived this morning from Idaho in a journey that wasn’t always easy.

“We’ve had rain, we’ve had snow, and to see that trailer arrive this morning is a big sigh of relief for all of us,” said Lauren Gillian, also of Connor Sports.

Though we have yet to know who will make it to Indianapolis, a team of workers hit the court right away to start putting it all together.

“So there’s two holes that we line up and drop the pin in the middle that connects the panels together. Once those are connected, we close up each panel and just keep moving down,” Campbell said. “So we ask the guys to kind of put them down at a 45 degree angle and we lay the whole row and then we come back and just kind of close them all up.”

The stage is about 2,500 feet larger than a typical basketball court, keeping up with the NCAA trend of preferring that bigger surface.

It’s transformed Lucas Oil Stadium as we typically know it.

“This is a football stadium right? It’s built for football, that’s what it’s made for, and we’re turning it into a basketball arena. So everything about this arena, I imagine, from the fan experience, is different than what they’re used to.”

Hours of heavy lifting and precise planning are the culmination of weeks of getting the court game-ready, but the crew still calls it a labor of love.

The Final Four will take place April 4 and 6.

It will be the second time the tournament will take place at Lucas Oil Stadium, the first being back in 2010.