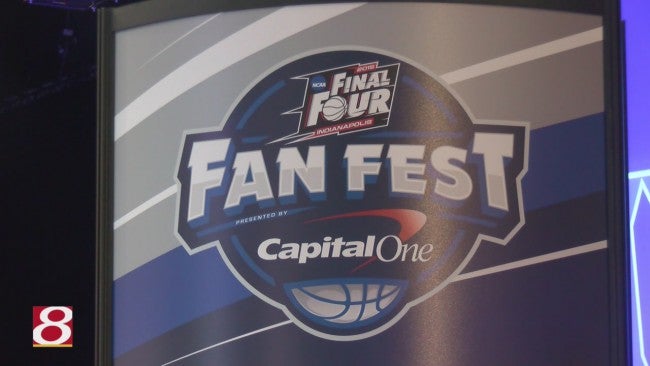 INDIANAPOLIS (WISH) — The games are scheduled to start Saturday night but the Final Four was well underway Friday. Fan Fest opened at noon to kick off the weekend at the Indiana Convention Center.

After weeks of planning and an eight hour drive, the Qorpus family is finally here. They’re soaking in Fan Fest and rooting for the Jay Hawks, except for dad.

They can all agree on one thing: they’re glad the drive from Toronto is over.

Saturday they’ll be at Lucas Oil Stadium for the games, but Friday it was all about shooting some hoops at the convention center.

Jackson Clapp didn’t have to drive eight hours to do that. He came in from New Castle with his friend, Cole.

“It’s pretty awesome to be able to come here and enjoy this experience,” Jackson said.

Plenty of Kentucky blue was at the fest, but the Boilermakers were also represented. Mark Gribben of Indianapolis was first in line to get coach Matt Painter’s autograph.

“I’ve been a Purdue fan forever. I love Purdue,” he said. “I just had to get his autograph.”

The Fan Fest will be open Saturday, Sunday and Monday.