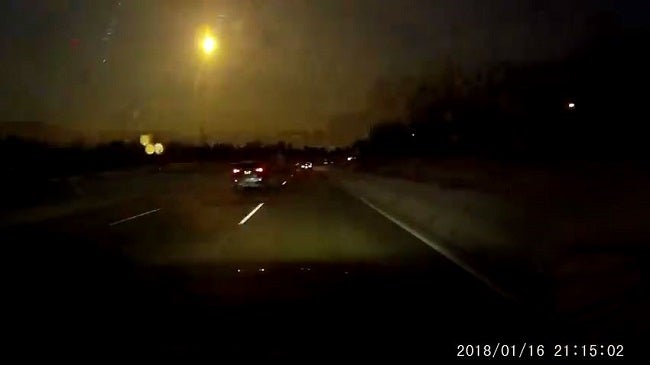 INDIANAPOLIS (WISH) — A fireball that passed over metro Detroit on Tuesday night was lighting up social media.

The possible meteor also caused problems for the American Meteor Society, which posted a notice that heavy use was overwhelming the servers for its website.

The society said it was investigating more than 50 reports about fireballs seen Tuesday night over multiple states.

Some residents reported their homes shaking.

The weather service confirmed it was not lightning or weather-related, but was likely a meteor.

After reviewing several observational datasets, the NWS can confirm the flash and boom was NOT thunder or lightning, but instead a likely meteor. We continue to monitor feeds from astronomical agencies for official confirmation of a meteor. #miwx– NWS Detroit (@NWSDetroit) January 17, 2018

In a YouTube video from a dash camera, Mike Austin caught the fireball while driving near Bloomfield Hills, Michigan on Interstate 75 northbound. “Looked really close,” he said in the social media post.

Chalsea Means, on Instagram as @moorethrottle, shared views of the fireball from cameras with CNN. Those views are in the video at the top of this story.

WAS IT A METEOR??? This video captures the bright light everyone has seen in the sky tonight. Courtesy of #Local4 viewer Kevin McCombs. pic.twitter.com/RY4u23jYAY– Jason Colthorp (@JasonColthorp) January 17, 2018