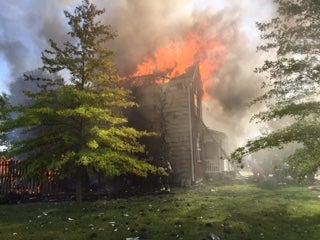 Officials said that they had to move to a defensive stance to combat the flames of the home near 131st Street and Howe Road, when the staircase became engulfed in flames.

No one was home when the fire started, and neighbors rescued the family’s dog. The residence is almost a total loss.

Officials reported that there weren’t any injuries, and that the fire is under investigation.