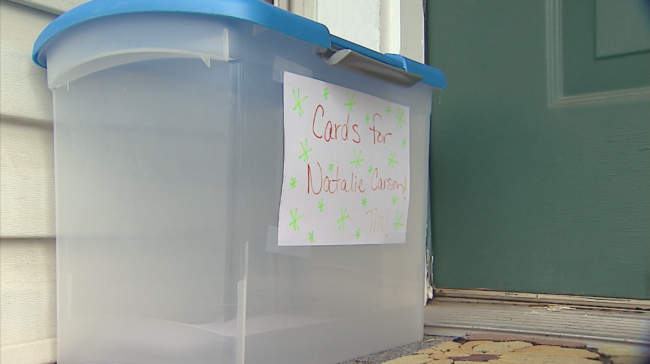 FISHERS, Ind. (WISH) – A Fishers mom is working to make the birthday of a Colorado woman very special this year.

The woman’s story went viral online after she claimed to have never celebrated her birthday in 19 years and now wants a big change for her 20th. So one week ago she posted her birthday wish on Craigslist. She asked for a family to rent for a celebration. She offered $8 per hour for the family and the response was overwhelming.

Natalie Carson was adopted as a baby and moved to Georgia, but re-entered foster care after her adoptive family abused her. When she aged out of the foster care system nearly two years ago, she returned to Colorado. She says her childhood didn’t come with typical birthdays and holidays.

The story reached Jema Frauhiger all the way in Indiana. She is now asking for help to make Carson’s birthday the best it can be.

“I was adopted as a baby, but her story stood out. There are many kids like her who age out of the system,” Frauhiger said.

Frauhiger says she was blessed with a loving, adoptive family and now as a mother of two, she wants to send some love from Indiana to Colorado.

“These are the cards we’ve received so far. A couple letters and then some actual store bought cards,” Jema said as she sifted through a pile of envelopes.

After a simple Facebook post on her personal page and an Indy Moms group, Frauhiger started receiving cards for Carson in the mail and even in a drop box on her doorstep.

“Obviously we couldn’t be there, so if we could just send her something to make her feel special and realize there are people all over who care,” Frauhiger said.

Now both Frauhiger and Carson hope this simple ad-gone-viral will inspire people to consider adoption and fostering, so other children don’t fall through the cracks.

“She isn’t a statistic. She didn’t let her negative experiences in life take her down. She went on and got her GED. She’s going to college,” Frauhiger said.

“There’s something more, you know, than just me. There’s a million more of me,” Carson said.

Frauhiger will continue to gather cards and letters for Carson through this week, before putting them together in a care package to be sent of in time for Carson’s birthday next week. If you’d like to get a card to Natalie, e-mail Nina Criscuolo at nina.criscuolo@wishtv.com.