Fitness journey begins with Indy Mini dare, leads to half marathon in every state 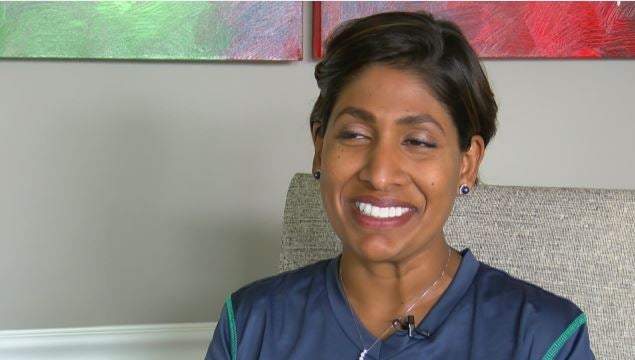 INDIANAPOLIS (WISH) — A central Indiana doctor crossed the finish line of the 2018 Hapalua race in Hawaii, achieving her years-long goal of completing a half marathon in every state.

Deshini “Dee” Moonesinghe’s unexpected fitness journey began in 2007 during her internal medicine residency when colleagues jokingly dared her to run the 500 Festival Mini-Marathon.

Moonesinghe had never played sports, worked out or done “anything remotely athletic” prior to registering for the Indy Mini, she told 24-Hour News 8.

She trained for six months and initially struggled to run even a quarter of a mile on the treadmill without experiencing chest pains and shortness of breath.

“It was crazy,” said Moonesinghe. “But completing this half marathon was already on my [bucket] list. Once something is on that list, you cannot delete, erase or cross it out. It has to get done.”

The intensely driven, goal-oriented mentality that had served her well in medical school also fueled her to tackle the new physical challenge, she explained.

However, focus alone was not enough; she had to learn how to listen to her body, pace her progress and set realistic goals.

Moonesinghe said she simply wanted to cross the finish line “injury free and not dead” when she ran her first Indy Mini in May 2008. The exhilaration of completing the race left her craving more half marathons – and medals.

“I don’t think I took that thing off for a week,” Moonesinghe said, laughing. “That medal was pretty sweet. I was hooked.”

She began a running scrapbook and soon amassed a growing collection of race bibs and medals, finding time between 16-hour workdays at the hospital to train.

Moonesinghe eventually joined a virtual running club and was inspired to embark on a nationwide challenge. She had a new item on her bucket list: “run a half marathon in every state.”

She seized the opportunity to travel – and run – and took delight in adding a page to her scrapbook and coloring in a state on her map t-shirt for each completed race.

“Ta da! All done!” Moonesinghe beamed, squeezing yellow puffy paint onto the Hawaiian islands after returning from the Hapalua. “On to my next goal.”

She now plans to run 100 half marathons, she told 24-Hour News 8, and encouraged beginning runners to embrace the mantra she often repeats to herself: “Failure is not an option.”

“It’s never too late to start working toward a fitness goal,” said Moonesinghe. “Look at me. I never ran in my 20s. No 5Ks. No 10Ks. I went straight away into a half marathon. No matter what mountain you have to climb, it really is one step at a time.”