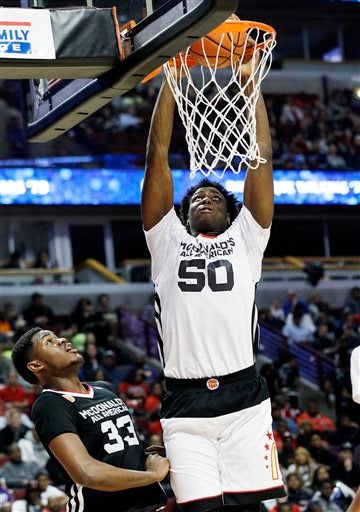 WEST LAFAYETTE, Ind. (WLFI) – Sources say a five-star recruit who had originally given his word to Michigan State has now committed to Purdue.

On Tuesday, Swanigan tweeted “Boiler Up!”

The 2015 Indiana Mr. Basketball was also named one of the Top 20 players in the United States. Karpick said it’s significant because he’s one of the top recruits in the country, and he’s coming to Purdue.

“Six-nine, 300 pounds – that’s why they call him ‘Biggie,’ And he’s a guy that can make a difference in Purdue’s men’s basketball program,” Karpick explained. “A team that will probably rank in the Top 25 headed into next year, he can make a difference right away. And to get a guy like that is really big for Purdue.”

Karpick said Swanigan’s story has been an “ongoing saga.” Coach Matt Painter has been tirelessly recruiting Swanigan for the past two years.

Two weeks ago he decommitted from Michigan State, and talk began – where will Swanigan go?

According to Karpick, Swanigan’s father Roosevelt Barnes, a former Boiler player, said they felt “Purdue was a better fit.”

As per NCAA rules, Painter cannot comment on the situation until a time it becomes official. Since no one believes Swanigan will sign a letter of intent, it will become official once he enrolls in classes expected June 16.

“It’s a done deal from everything we can gather,” Karpick stated. “He’ll be coming to Purdue and playing in the 2015-16 season.”