Florida man arrested after dancing to oldies atop deputy’s SUV 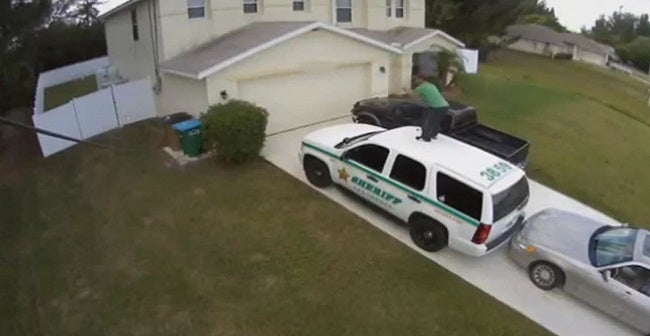 LEE COUNTY, Florida (WFLA) – Surveillance cameras have caught many a criminal in the act – and as in this case, surveillance videos can also be entertaining.

A home surveillance video showing a man dancing on a Florida sheriff’s deputy cruiser is making its way around the Internet.

The video shows the man pulling his car in the driveway of a home that has a Lee County Sheriff’s Office SUV parked out front. The man pulls his car up to the bumper of the SUV, gets out and climbs onto the roof of the cruiser.

He then looks to strike a karate pose and starts dancing on top of the SUV while the Hall & Oates song “Rich Girl” plays on the radio in the background. The man continues to dance to music playing on an oldies radios station, pointing to his vehicle and moving his body to Supertramp’s “Goodbye Stranger”.

The man danced on the car in broad daylight for more than five minutes. The video then shows him sliding onto the windshield, then standing on the hood of the SUV and breaking the windshield wipers. The man gets off the SUV, steals an American flag from a neighbor’s yard and wanders around in the home’s yard, WISH-TV’s sister station WFLA reports.

Neighbors saw the man and his weird behavior and called police.

The last part of the video shows deputies showing up, then searching the yard for him. It ends with the deputies escorting the handcuffed man to a deputy cruiser. He was charged with disturbing the peace and criminal mischief, according to a Lee County Sheriff’s Office Facebook post.