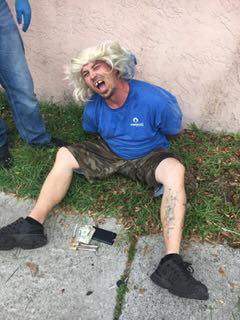 VIERA, Fla. (AP) — A drug suspect on Florida’s Space Coast tried to elude deputies setting up a perimeter around his house for a bust by bicycling away disguised in a woman’s blond wig.

The Brevard County Sheriff’s Office said they arrested Robert Walls despite his attempt at disguise.

The sheriff’s office says in a statement that when agents caught up with Walls last Thursday to arrest him, he admitted that he was using the wig as a disguise to elude them.

The sheriff’s office says he was wanted by a fugitive task force seeking suspects from a major drug investigation that led to arrest warrants for more than 100 defendants.

Online court records show no attorney listed for Walls. He faces charges of solicitation to sell a controlled substance and criminal conspiracy.