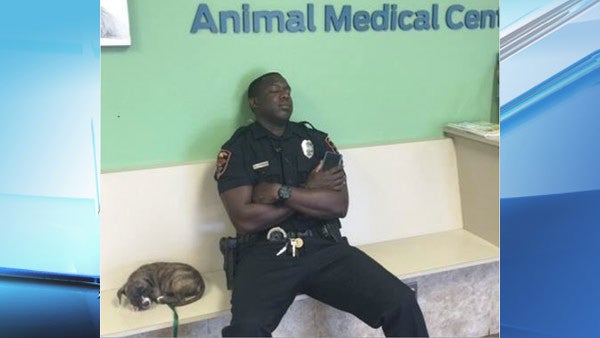 Officer Kareem Garibaldi stopped to help the pup and found it had no collar or tag. Officer Garibaldi searched for the dog’s owner but had no luck, according to the Lakeland Police Department.

What Garibaldi did will leave you with a smile. He took the puppy to the police department, feeding it for the night. He then took it home after his shift.

The officer posted pictures of the dog to social media on Sunday, hoping to find the owner. “At the end of his third day, 12-hour shift, Officer Garibaldi, on his own time, transported the dog to the SPCA to be checked out,” police said.

“It’s the kind-hearted officers like this that makes the Lakeland Police Department truly unique,” police said. “Having worked a long weekend, Officer Garibaldi still found the energy at the end of his shift to help man’s best friend.”