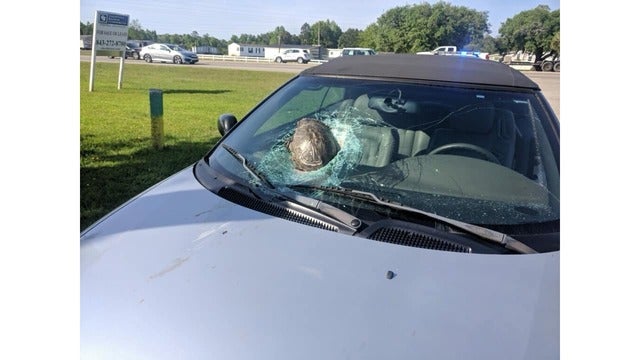 CONWAY, S.C. (WBTW) – If you haven’t heard of a flying turtle, today might be the day.

One man’s car got hit by a turtle that was flying through the air after another vehicle’s tire smacked the turtle into the air.

“I still don’t understand how it, like, the exact angle of that tire, for it to just fling into my windshield,” said John Gardner, who’s windshield is now shattered from where the tortoise hit.

Gardner said stuff like this never happens to him, but Tuesday afternoon around 4:30 p.m., it did, while he was minding his own business driving to work down Highway 501 in Conway, near Lake Busbee.

The rear tire on a truck near him on the road hit a turtle, flinging it into Gardner’s windshield.

Gardner was covered in glass after the accident. According to Rob’s Auto Body, the turtle died upon impact.

“I didn’t get hurt at all, I just remember when the cops showed up, he was like, hey, you’re covered in glass,” said Gardner. “And, because I didn’t know, like I didn’t know there was any in my hair and stuff like that, so I’m just like oh okay.”

Gardner said police were called to the scene and the guy who hit the turtle got out of his truck.

“He checked on me, and like, we both stopped and he made sure I was okay and everything like that,” he said.

“The wipers and stuff like that all got broken too, so it’s going to be a lot,” he said.

Gardner said he was so startled that there was no reaction time or space on the road to move over out of the way of the turtle.