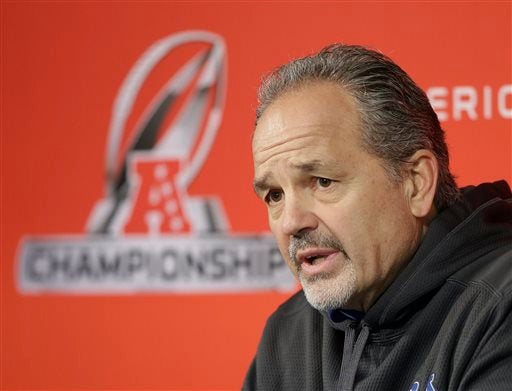 On Thursday, he grabbed a microphone and started interviewing inside linebacker Jerrell Freeman. On Friday, he delivered a pair of new sneakers to outside linebacker Erik Walden. The rest of the week, well, his deep voice and unmistakable laugh have reverberated.

Make no mistake, Jean Francois and his teammates are focused intently on Sunday’s AFC championship game at New England. They’re just trying to have a little fun.

“There’s no need to be uptight and worried,” Jean Francois said. “We can still be goofy, like we always are in here.”

Why not? Indianapolis has already defied expectations by winning at Denver. Even fewer people believe the Colts (13-5) will beat the Patriots (13-4) on their home turf.

The Colts have gone one step deeper in this season’s playoffs than they went a year ago, and are two games deeper than they were two years ago. So with seven wins in eight games, the locker room chatter and playful banter is a reflection of growing confidence.

“You should be yourself,” Walden said. “Look, everybody’s locked in, but you’ve got to be yourself. Your personality has to stay the same, but the preparation goes up.”

For these Colts, it’s just the way they do business.

Coach Chuck Pagano put a small archery target on an easel in the locker room hallway this week, an effort to emphasize the point he made to his players about being focused on the target.

Plus, the Colts can always rely on the calming presence of Andrew Luck. Though he’s one of 40 players on Indy’s roster about to make their championship debut, the third-year quarterback rarely gets rattled.

“Peyton (Manning) had a different, more strict demeanor,” four-time Super Bowl-winning kicker Adam Vinatieri said, remembering that the former star Colts QB didn’t like loud music in the locker room. “But there’s a lot of different ways to skin a cat. I think as long as you’re ready to play on Sunday, that’s all that matters.”

Cory Redding is eager to erase the stinging reminder of a 23-20 championship game loss at New England three years ago. It cost the defensive end a trip to the Super Bowl, and the next year, Redding and Pagano were in Indy when the Ravens won the title.

Redding wants to make sure another opportunity, perhaps his last one, doesn’t slip away. Usually exuberant, he put on his game face in the lead up to the Denver game and hasn’t taken it off yet. His teammates don’t mind.

“He wants to play in a Super Bowl because he never got that chance,” said Jean Francois, who won an NFC title with San Francisco. “Let him be the way he is, we’ll be loose.”

But the Colts are quick to point out that just because they’re having fun, they’re serious about winning.

Pagano has talked all week about how the run defense is playing its best football since he came to Indy while the offense and special teams are playing well, too.

He’s not the only one who sees it. Two weeks ago, Reggie Wayne walked to the podium and told reporters that this team reminded him of the 2006 Colts, who won the Super Bowl. He still believes that’s true.

All the Colts have to do now is prove they can win this way, their way.

“We’re not going to (change things) because of the enormity and the ramifications and all that stuff surrounding the game, we’ve got to focus on the things that we need to focus on,” Pagano said. “If I’ve got to give some Knute Rockne speech at this point in the season to get them fired up, something’s wrong. That won’t be needed. They’ll be ready to go.”

NOTES: Pagano said cornerbacks Vontae Davis (knee) and Greg Toler (groin) are listed as questionable after being limited participants in practice Friday. He expects both to play Sunday, though. Walden (knee) was a full participant Friday and is listed as probable. The Colts don’t have anyone else listed on their injury report.