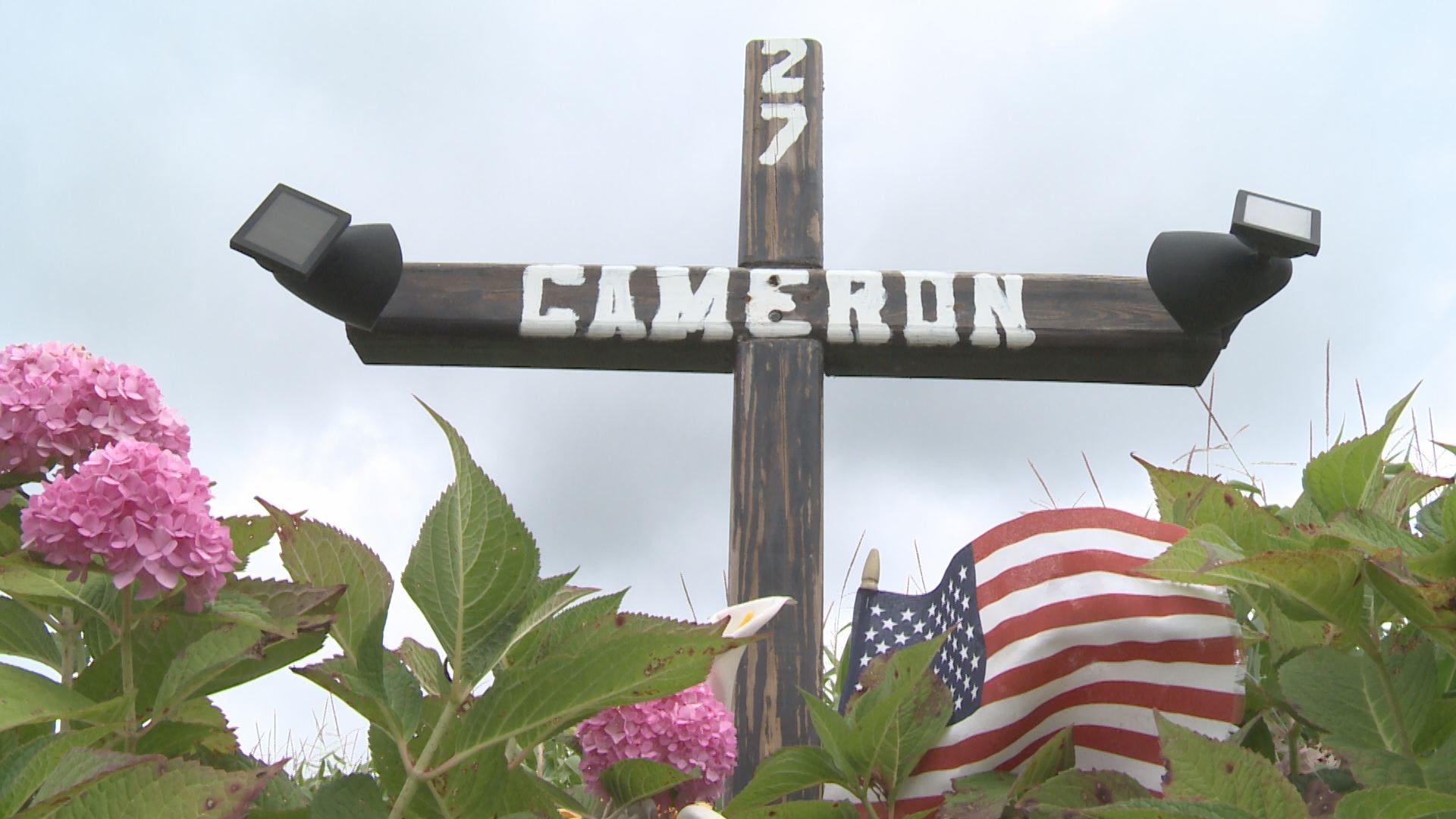 CHURUBUSCO, Ind. (WANE) – Alongside U.S. 33, just south of Churubusco, sits a memorial for Cameron Amber. In the fall, the cross had a football helmet on top. The helmet was reported missing earlier in the week.

The family said “It’s kind of disheartening to know someone would come out and desecrate a memorial like this. The community looks forward to the helmet going up and we enjoy it going up,” Bob Amber, Cameron’s dad, said. “In Churubusco, football in the fall is a way of life. For someone to come and take [the helmet] is not setting well with us and it’s not setting well with the community.”

On Thursday the helmet showd up at Churubusco’s Town Hall. The family said it was anonymously left with a contact name and number inside. It was not clear if the person was the one who took the helmet or recovered it.

Cameron was killed on U.S. 33 by a distracted driver in a head-on crash in December 2010. He was only 20 years old and well-known in Churubusco for his time on the high school football team, helping them win a Class A regional championship in 2007.

“He was a great quarterback on some great football teams,” Bob said. “When the community found out the helmet was missing, with social media, the support we have just skyrocketed.”

Bob attached the helmet to the cross last Wednesday. On Tuesday, he got a call from someone asking where the helmet was.

“It was screwed on pretty heavily. It wasn’t going to move on its own. We’re speculating someone may have taken it,” Bob said. “You can see where they broke the screws trying to wiggle it out.”

Just to be sure, several people still searched the fields around the memorial to make sure the helmet wasn’t there.

“I’d go down every row [of corn] and look right and left and we haven’t been able to find it. I think someone stole it. Definitely,” Travis Knapp, one of Cameron’s good friends, said.

As the news of the stolen helmet spread on Facebook, people started pitching in reward money. The pot quickly grew to more than $1,100 for the helmet’s return. Then by Thursday, after seeing the story Wednesday night, a family friend generously matched that total to push the reward pot to $2,200.

Cameron was engaged and expecting a child when he was killed. His daughter, Karrington, now 4 years old, helped Bob, her grandpa, pull weeds and pick flowers around the memorial on Wednesday. She said she just wants her daddy’s helmet back. Bob also had a message to whoever took the helmet.

“I don’t believe you’re a thief. I believe you’re playing a prank and wanted something. That helmet’s not a piece of history. It’s only a memorial. If you want to bring it back and leave it on top, I’ll take care of it from there. You’re not gaining anything by having that helmet,” he said.

The helmet was a gift from the school when Cameron died and several players signed it. But, it’s not the helmet Cameron wore when he played on the team.

The Amber family said they don’t plan to press charges if the helmet’s returned. They just wanted it back.

The family is also planning a fundraiser to honor Cameron and raise money for Cell Control devices for Churubusco High School students. Bob said the driver who hit Cameron was distracted by his phone when he crossed the center line. Cam’s Cause Co-ed Mush Ball Tournament will be September 5 from 8 a.m. to 8 p.m. at the Churubusco Town Park. There will also be food and raffle drawings.