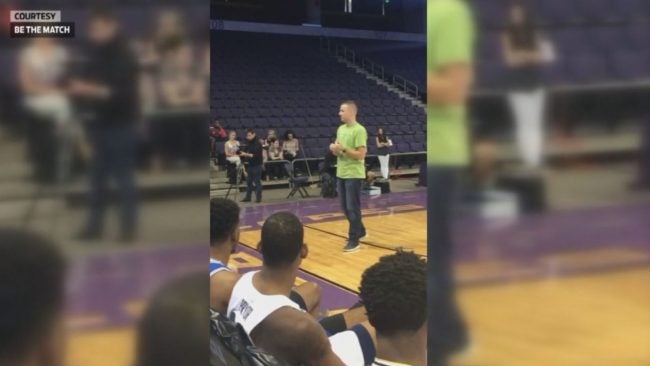 INDIANAPOLIS (WISH) – Butler basketball fans might be bummed the team isn’t playing in this weekend’s Final Four, but that doesn’t mean the university isn’t represented.

Former Butler basketball player Chase Stigall is no stranger to Final Four weekends. “The first Final Four was in Indianapolis with our home crowd,” Stigall said. “The second Final Four we were in Houston. Now, I’m in Phoenix, and I have a totally different mindset.”

This week, Stigall isn’t a player, but ambassador. His assignment, talk to the nation’s top players about his former bench mate, Andrew Smith, prior to the skills contest. He’s in Arizona, but he made time to talk to 24-Hour News 8 by webcam and shared his experience.

“The first time I was speaking about Andrew, I got emotional just because I knew the guy, and who he is and what he represented,” Stigall said.

Smith died last January after a battle with cancer. Before he did, he encouraged people to register to donate bone marrow. It’s a commitment Stigall made last year when he donated bone marrow to help a two-year-old.

Butler University has its own campaign, Project 44, which aims to get 18,920 people to sign up, and save 44 lives. The reason for the number difference, it takes 430 donors to find one match.

So far, 1,200 people signed up. It’s a number the university says could go up thanks to what Stigall is doing. “It just goes to show that the Butler way transcends the bounds of campus,” Edgington

Stigall won’t leave after Thursday’s three point and slam dunk contest. He’ll stay at the Final Four through the weekend talking about Smith, and Be The Match.